Home Environment New Attacks Ads Are the Latest Salvo in a Battle Between a... 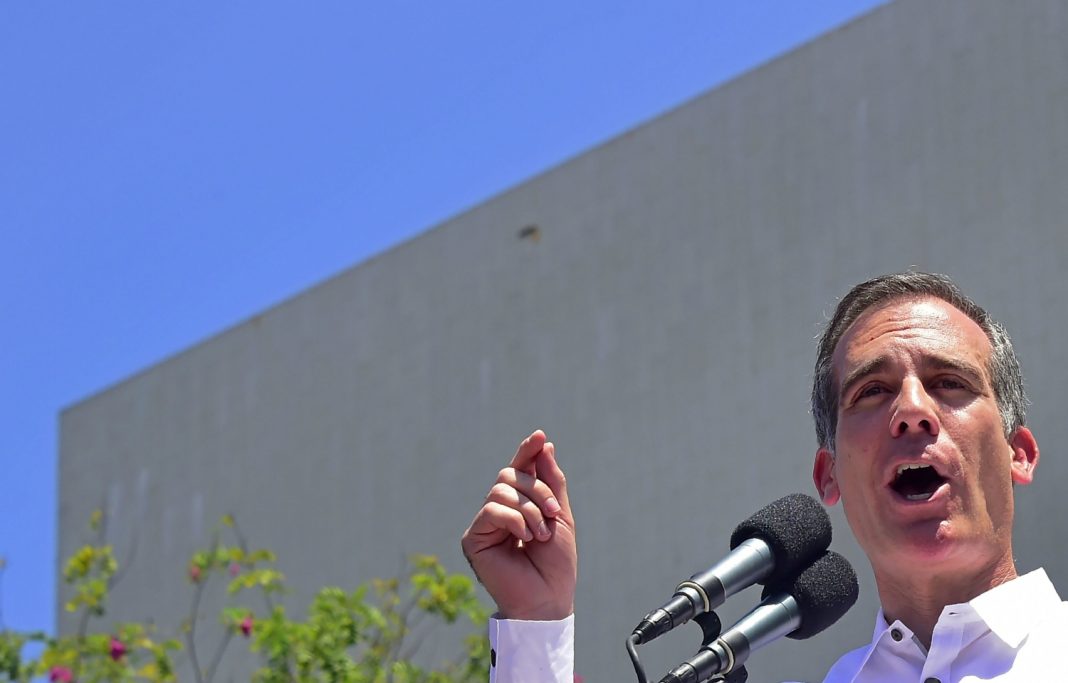 Eric Garcetti has been tangling with the labor union the International Brotherhood of Electrical Workers Local 18 and its hard-nosed leader, Brian D’Arcy, since even before he was elected mayor. Now the parties are at odds again.

On Friday morning, a pair of ads attacking the mayor began appearing locally. The two 15-second pieces were paid for by the Working Californians Research Fund, a nonprofit largely funded by IBEW Local 18, which represents most Department of Water and Power employees.

As fires shut off the lights and ravage #LosAngeles communities —

Why is @MayorofLA @EricGarcetti pushing plans that will eliminate sources of energy that keep the lights on in homes and hospitals during emergencies?

It is time to pump the brakes on #EricGarcetti. pic.twitter.com/gP3MSraFOB

One ad includes scenes of mountains on fire and a supermarket in the midst of an apparent blackout. “As fires shut off the lights and ravage L.A. communities, why is Eric Garcetti pushing new schemes that eliminate sources of energy that keep the lights on in homes and hospitals during emergencies?” it asks.

New taxes on #LosAngeles drivers when gas prices are already at record highs.

Plans that would increase utility bills by thousands.

The second charges that Garcetti’s priorities are “new taxes on L.A. drivers” and “plans that would increase household utility bills by thousands.”

“The DWP union Super PAC ads are false,” says Alex Comisar, a spokesman for the mayor. “DWP is investing in more clean and renewable power, including the nation’s largest solar and energy storage plant just approved in Kern County and local solar projects. Throughout our transition to 100 percent renewable energy, reliability will remain the utility’s top priority.”

The aim of the ads may be unclear to many viewers. IBEW Local 18 is not mentioned, and there is no specific call to action or demand, outside of a reference in one that, “It’s time our leaders pump the brakes on Eric Garcetti.”

In reality, the campaign appears to be sparked by a mayoral environmental move.

A bit of context: Garcetti has made environmentalism a hallmark of his administration, and the topic was a focal point of his State of the City speech in April. That same month he announced Los Angeles’ Green New Deal, modeled after Rep. Alexandria Ocasio-Cortez’s national proposal. Garcetti’s version seeks to make the city carbon neutral by 2050, with components including recycling wastewater, making buildings emissions free, and creating a zero-carbon electricity grid.

IBEW Local 18 is focused on another Garcetti environmental initiative—his proposal not to rebuild a trio of DWP plants powered by natural gas, a fossil fuel. In February Garcetti announced his intention to phase out the coastal Scattergood, Haynes, and Harbor plants by 2029, stating at the time, “This is the beginning of the end of natural gas in Los Angeles.”

Michael Trujillo, a spokesman for Working Californians, said that IBEW Local 18 supports green efforts, but asserts that shutting the plants would mean a greater reliance on using lithium-ion batteries (which store solar power). He maintains there will be difficulties when it comes to recycling them.

Media reports have noted challenges in recycling the batteries, but for IBEW Local 18, the greater concern, and the driving force in the ads, is jobs. Trujillo says positions will be eliminated when the plants are depowered.

“It’s going to mean the loss of middle-class, blue-collar jobs, for sure,” he says. Even if plant workers are retrained, he adds, their salaries will shrivel.

“Mayor Garcetti is committed to protecting our workers and the environment, and none of the DWP workers at the three gas powered plants will lose employment during our transition to 100 percent renewable energy,” Comisar says. “Despite the DWP union Super PAC’s ads, Mayor Garcetti remains committed to DWP reforms to reduce emissions, keep rates low, and protect and create jobs.”

The dispute between the city’s chief executive and one of its most powerful labor groups should not be a surprise. Frosty relations between Garcetti and IBEW Local 18 go back to the 2013 mayoral election, when the union’s political arm poured millions of dollars into the campaign of a Garcetti rival, City Controller Wendy Greuel. The Garcetti team managed to turn the issue against Greuel, and DWP reform became a driving issue in the race.

Voters ultimately sided with Garcetti. Shortly after his inauguration, when it came time for the new mayor to negotiate a contract with the union, the sides hammered out a deal that included no raises for three years (a later contract included some significant pay hikes).

The new ads indicate that whatever détente may have existed is long gone. The spots will run through at least the end of this week, and according to Trujillo, Working Californians is spending in the “mid six figures” for a campaign that includes commercials on local TV stations and placement on Facebook, Instagram, and other web platforms and sites.

Garcetti’s environmental initiatives have generally drawn praise from local green groups. Still, economics have not been entirely dismissed. Andres Ramirez, who is policy director of the group Pacoima Beautiful and part of the Los Angeles Clean Energy Coalition, referenced the need to prepare for the future on multiple fronts.

Expect the dispute to continue.

RELATED: Here’s What Eric Garcetti Had to Say About Housing Prices in a New Interview