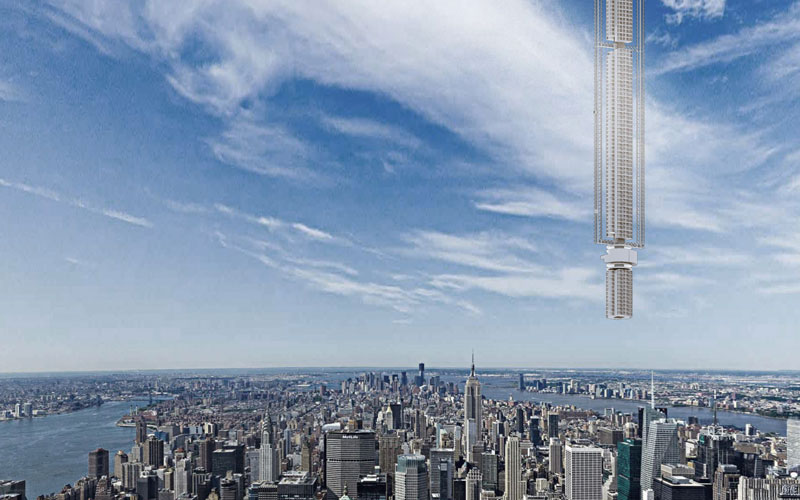 In a regular week, that 66-story tower coming to downtown would be the biggest skyscraper news out there. Not this week.

The firm contends that if NASA can capture and redirect an asteroid for the sake of science, we can do the same for the sake of real estate. The giant hunk of space rock would serve as an anchor for a skyscraper that would dangle into the atmosphere, drifting in a figure eight pattern between New York city and Peru in each 24 hour period. (Google “geosynchronous orbit” to get a better sense of how this would work.) Solar panels would provide power, and water would be captured from clouds, and there would be vertical districts for life, work, and play.

The system allows for “buildings of almost unlimited height,” the firm writes in a press release, which should make us all excited for the eventual day when we get to step into an elevator and say, “Computer, take me to the almost infinityth floor.”

The designers behind this idea envision the building as an extension of New York City—but we could really put it to great use here. We already have Elon Musk digging tunnels under our streets and connecting our brains to the Internet, so why not embrace our sci-fi destiny and solve our development issues in one fell swoop? We could preserve the suburban character of Los Angeles and also have urban density in the form of a space-tower that passes overhead once per day with special docks for getting off and going to Trois Familia for brunch. That, my friends, is the future we deserve.

Thomas Harlander is a staff writer at Los Angeles magazine. You can follow him on Twitter and Instagram. He recently wrote: A Beautiful New Park Is About to Open Just East of Chinatown