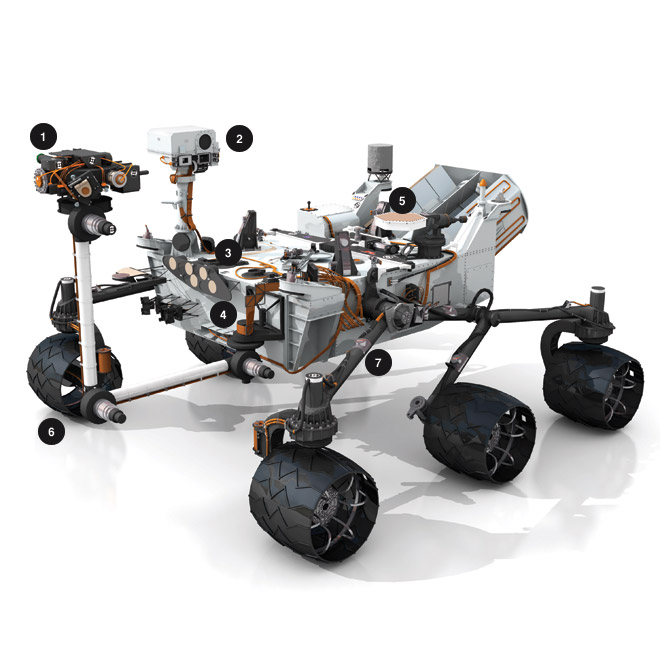 After 352 million miles, Curiosity landed on Mars in August of last year. But the rover, which is the size of a Jeep and looks like a cross between Wall-E and a grasshopper, took its first spin in the Spacecraft Assembly Facility at the Jet Propulsion Laboratory in La Cañada Flintridge, with a JPL team programming its every move. Curiosity has been exploring the Gale Crater, searching for evidence of microbial life, and more missions are on the horizon. See how it runs.

1. The Arm
The seven-foot-long limb is like an inter-planetary Swiss Army knife, equipped with a camera, scoop, X-ray spectrometer, and drill, which helped uncover powdered rock samples beneath Mars’s surface.

2. The Mast
Curiosity’s “face” contains seven “eyes,” including four navigational cameras, a telephoto lens, and the ChemCam. The last can fire a laser at a rock up to seven meters away, capture light emitted from plasma, then send the image to the “neck,” where it is analyzed by a spectrometer.

3. The Sensors
Ultraviolet sensors monitor the weather. Sample Analysis at Mars (SAM) and CheMin devices analyze soil and rocks for elements and chemicals, respectively. A radiation system checks how the atmosphere affects the surface.

4. The Cameras
Curiosity ’s 17 cameras are our windows to Mars. Eight are Hazcams—fish-eye lenses facing the terrain—that allow the rover to avoid danger while exploring autonomously.

5. The Antennae
Through an orange antenna shaped like a lopsided hexagon, the rover receives commands from Earth. Another antenna shoots the rover’s findings up to Mars orbiters, which relay the information back to JPL.

6. The Wheels
To measure distance, each rotation of the six wheels leaves its mark, imprinting the letters “JPL” in Morse code onto the red dirt. There’s a motor in each wheel; a few are capable of steering independently, which enables the rover to maneuver nimbly.

7. The Suspension
Inherited from its predecessor, Sojourner, the rocker-bogie system lets the rover climb over two-foot-tall obstacles. Unlike Sojourner, Curiosity can land

These 13 Innovations Changed the World—and They All Originated in L.A.