Home Internet Marianne Williamson May Not Have Won the Debate, but She Won the... 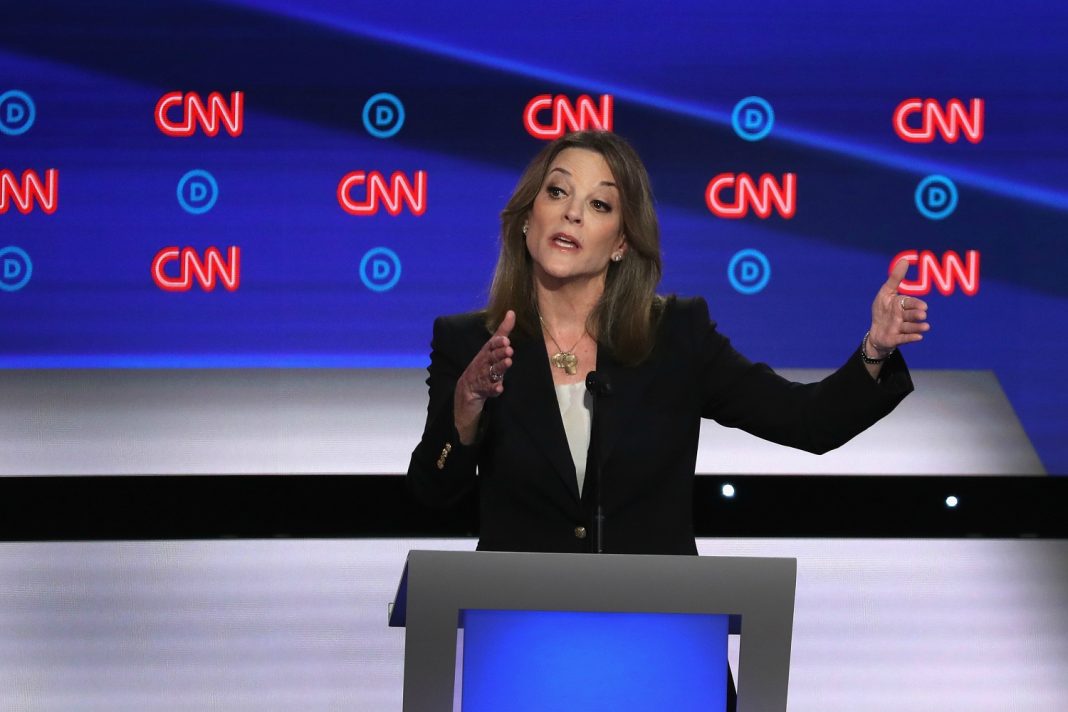 While all eyes were on Democratic frontrunners Bernie Sanders and Elizabeth Warren in Detroit at last night’s debate, author and self-help guru Marianne Williamson managed to steal the show, or at least post-debate Twitter. Even though she got less time than the center stage Senators—to whom most of the evening’s questions were addressed—Williamson used her minutes wisely.

Her biggest viral moment came when asked what she would do to prevent another Flint water crisis. Saying Flint was just “the tip of the iceberg” and part of the nation’s “dark underbelly” of racism, she said that Trump had brought “a dark psychic force of collectivized hatred” to America.

If you think any of this wonkiness is going to deal with this dark psychic force of the collectivized hatred that this President is bringing up in this country then I'm afraid that the Democrats are going to see some very dark days. #BigTruth #Marianne2020 pic.twitter.com/QKAb0E1bpk

Williamson—who was the number-one search trend on Google as the debate came to a close—also scored with the audience when she suggested a $500 billion reparations package, saying that 250 years of slavery left behind, “an injustice that continues to form a toxicity underneath the surface, an emotional turbulence that only reparations will heal.”

Donald Trump Jr. used the audience’s positive reaction to Williamson to subtly undermine more viable candidates, tweeting, “People are gonna think that I’m trolling but compared to what else is up on this stage I think Marianne Williamson is actually winning this thing. This is amazing. No question she seems to be drawing the biggest applause of the night.”

People are gonna think that I’m trolling but compared to what else is up on this stage I think Marianne Williamson is actually winning this thing. This is amazing. No question she seems to be drawing the biggest applause of the night.

After the debate, Williamson seemed pleased with her performance. When Anderson Cooper asked if her there was another Democratic candidate she could support, she replied, “Why do you need anybody else? You’ve got me.”

CNN's Anderson Cooper asks Marianne Williamson whether she has another 2020 Democrat she would support.

“Why do you need anybody else? You’ve got me” #DemDebate pic.twitter.com/Z1kDphtPHx

And, for what it’s worth, after the debate, Politico reported that Williamson had gained the most new Twitter followers. She still has dramatically fewer followers than Warren or Sanders, who each have two Twitter accounts (one for their respective presidential campaigns and one as senators). Warren has a cumulative 8.1 million and Sanders has a cumulative 17.9 million to Williamson’s 2.7 million.

And while some have criticized Williamson for being short on specific plans, she proved she could be shockingly direct for a politician. When one young reporter asked her if she had a pet, she told him, “I had a cat and the cat died.