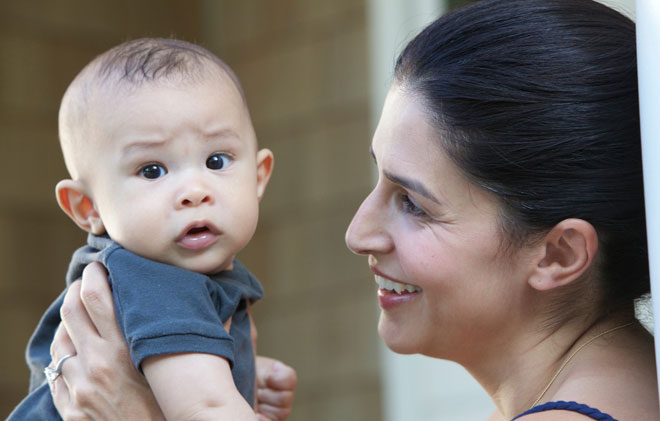 You hear it over and over before you have children. You can paint the nursery with non-toxic paint, organize your baby’s clothing by age and read every parenting book out there, but there is no way to prepare for a baby.

The saying “it takes a village” takes on new meaning the day you come home from the hospital.  Suddenly, you understand just how true this statement is, not as a sentiment, but as a very real societal need.

Both Soraya and Yasmine have vivid memories of the moment it hit them. On the one hand, they felt an innate knowledge about motherhood from the deepest parts of themselves. On the other hand, they couldn’t believe that Cedars Sinai hospital really just let them leave with these teeny human beings, that these beautiful but dependent gifts were theirs to raise and grow for the next eighteen years and beyond. Taking your baby home for the first time is a sobering moment for most new parents and, strangely, nobody really talks about it.

Here’s where the village comes in. No matter how terrific a husband or partner might be—and Mark and Matt are notably fantastic fathers to our children—it’s just not the same as having a sister figure (biological or otherwise) there with you. After Soraya’s firstborn’s birth, then single Aunty Yasmine visited from New York. As Yasmine said goodbye at the end of her stay, Soraya was blindsided by the overwhelming feeling of, “Wait, you are leaving me?  Alone?  With this baby?” She sobbed trying to explain the source of her feelings, but fell short in describing her combined sense of responsibility, loneliness, and utter joy. Soraya had appreciated the possibility of taking a shower, or free hands to eat, or, let’s be honest, private time to pee, and she suddenly realized having an adult woman with her for mental and moral support was the most important thing missing from her nearly-fulfilled baby registry.

Years later, Yasmine had the exact same epiphany when she said goodbye to a friend who had helped for a day while Matt was away on business. She called Soraya to say she finally understood. We fantasized about what it would be like if they could live on the same street. We could pop over to each other’s homes for dinner, hang out and have someone dear with whom to share the precious experiences our husbands often missed, and, dare we say it, those not-so-precious moments our husbands often missed.

If we mamas had that village to come home to with our new babies, with grandmothers and aunties and cousins and neighbor friends to gather strength and support from, wouldn’t we be so much better equipped to handle the stresses of being new moms?  How much easier would it be if there were lots of other mothers nursing around the clock and up at night and dealing with other siblings?

Thankfully, places like The Pump Station and Bini Birth (founded by world renowned doula Ana Paula Markel) offer a range of classes where mamas gain support while making friends with women who are sharing the experience.  When your veteran mom friends suggest you join a Mommy & Me class, they know the benefits go way beyond the class curriculum.

When you become a mama, you realize that the privacy we seek when buying a home or choosing a tucked away neighborhood to live in can lead to feelings of isolation later on.  You suddenly long for the campfire, the camaraderie of neighbors that you actually know and live with, day in and day out.  You want the nest, the tribe, the cul-de-sac. You want the village.

With seven children ranging in age from nine months to seventeen years between them, sisters and bloggers Yasmine Delawari Johnson and Soraya Delawari Dancsecs are experts at parenting in L.A. They take a break from PTA board meetings, cooking, and producing films to blog at CityThink each Thursday.