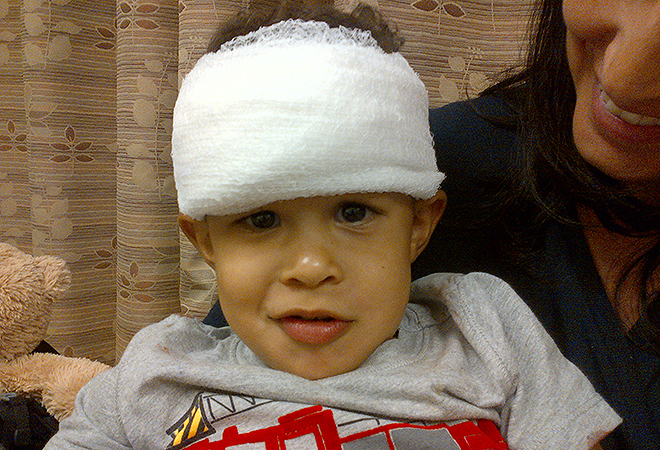 Shortly after Yasmine’s son Maverick began walking, he tripped his way to the sharp corner of a dresser drawer. His cries were from the shock and pain of the initial hit; hers were from seeing her baby bleed for the first time. There wasn’t much, but this was the first big boo-boo he experienced, and with it came his parents’ barely contained panic.

Since in was nighttime, Yasmine and her husband, Matt, immediately reached out to the pediatrician on call. After a few questions, the doctor established that the wound was minor, but asked them to email photos, which she forwarded to a plastic surgeon she knew. The surgeon’s advice: Don’t drag your little one to the E.R. for something like this. He offered to see Maverick in the morning instead.

Yasmine spoke to Soraya throughout the ordeal, telling her that the scare was worse than the injury, but she vowed to find a great pediatric plastic surgeon to put on speed dial should the need arise again. Fast-forward a year: Yasmine was at home, talking to her stepdaughter Kailey and Kailey’s mom, Erika, and Maverick was nearby, out of eyesight, when all three heard a terrible scream. Mamas know that kind of scream, the kind that gives you chills, because it’s different than the daily owies. His shriek sent Yasmine’s heart to her feet.

The three of them sprinted to Maverick and found him face down, lifting his tiny head out of a pool of blood. He had opened the backdoor (another new skill) and tripped, landing on the edge of a stone step in the backyard. Erika ran to the phone and dialed 911, Kailey became the triage assistant, toting clean towels and ice packs, while Yasmine carefully lifted Maverick into her arms and held him while an eerie calm came over her. The part of her brain that stored emergency information kicked in. Where is the blood coming from? A deep wound in the forehead. Is he coherent? Completely, though very shaken up. Yasmine figured that the cut was bad, but he didn’t appear to have any internal injuries or abnormal disorientation. Still, an ambulance was en route. The paramedics arrived, and Maverick was pronounced fine other than the need for stitches, so the decision was made to take him to the E.R.

Remember the promise Yasmine made after Maverick’s first spill to keep a pediatric plastic surgeon in her phone contacts? Well, she didn’t. It was 7 p.m., her nerves were shot, and she was in for a long night at the hospital. Hours after being admitted, a physician’s assistant approached the worried parents and suggested Dermabonding the wound. She said it could be hours before a doctor would be available for stitches. Both Matt and Yasmine were so depleted and traumatized by the whole experience, they agreed. Dermabond, a sort of superglue for cuts, also sounded like the least scary option for their two-year-old, who had already been through so much.

As days passed and the wound began to heal, it was clear that it would leave a bad scar. Yasmine researched top pediatric plastic surgeons in Los Angeles and took him to see Dr. John Reinisch, who explained why Dermabond had been a poor choice, but not a surprising one considering the priorities an E.R. staff must consider when assessing the seriousness of admitted patients. A bad scar on a forehead doesn’t trump saving a life, nor should it. But he explained that a deep wound simply cannot be held together with Dermabond. A plastic surgeon would have stitched the tissue underneath with dissolvable sutures, then recut the surface edges of the wound to create clean lines to stitch together, which would allow for the best possible scar.

At this point, however, there was nothing that could be done. The only option was to wait at least six months for the wound to completely heal, and if the scar was bad enough, Maverick could be put under anesthesia, and the wound would be reopened and closed properly. But both the doctor and Yasmine agreed that they would be hard-pressed to find good reason to put a child through this type of procedure for vanity reasons.

We hope you will never need to use any of this advice, but this is Yasmine’s takeaway:

Maverick is four now and his scar is visible, but nothing you would immediately notice. Yasmine and Matt look at it as something that gives his cute face character. Kids are active and most mamas have a story or two to share. But in the worst-case scenario, it’s still nice to be prepared.