Home Uncategorized MamaLA: The Hidden Gift of Having An Un-Nursery 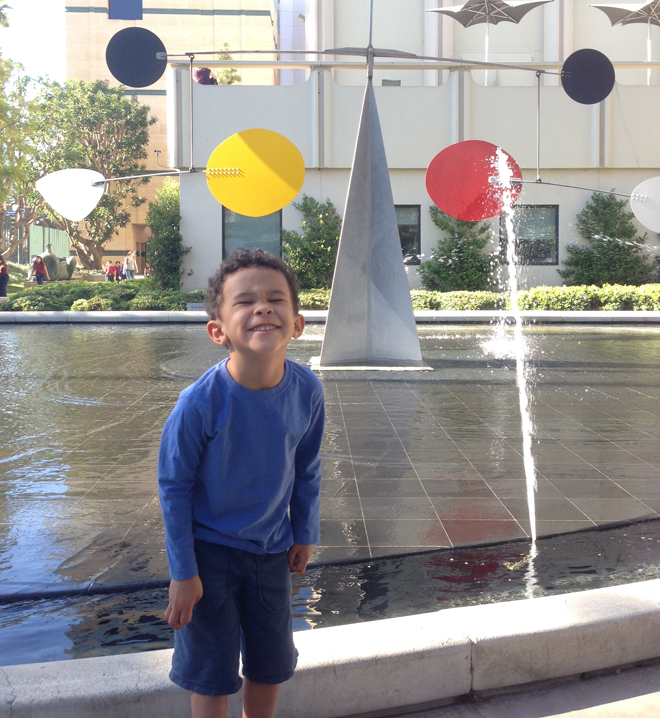 When Yasmine was pregnant with Maverick, she worked with masterful L.A.-based interior designer Bret Witke on an “un-nursery.”  Bret crafted a room Maverick could grow into; incorporating a mid-century console to serve as a changing table and keeping the palette gender neutral (just in case another Johnson should come along). But the greatest gift Bret brought to the room was a reproduction of art by Alexander Calder.

Hoping her son might be curious one day about the picture that hung over so many of his diaper changes, Yasmine sought out children’s books about the artist.  One in particular, “Sandy’s Circus,” captures Calder’s magic and whimsy. It tells the tale of young Alexander’s fascination with tinkering and form from a very young age.

When Yasmine recently learned LACMA was going to host a Calder exhibit, she pulled “Sandy’s Circus” from the shelf and read the story to Maverick. He listened intently. Maverick has become quite prolific with finger paint and collages (many of his greatest masterpieces cover his clothes), but as Yasmine read about Alexander Calder creating a miniature circus, Maverick sulked and commented that he couldn’t make the things that Alexander did. Yasmine reminded him that Calder had honed his skills since he was a boy, jumping at the opportunity to talk about how we get better at things we practice.

The next day, Maverick was playing independently in the backyard.  As Yasmine stood at the stove, Maverick ran into the kitchen. “Look, mama, I am Alexander!” he said. He gripped a creature, twisted from a long, thin plant frond in his hand.

Each night after that, Maverick asked to read the “Alexander” book again. Soon they graduated to a book on Calder’s mobiles (the artist invented the mobile, a structure that is now a given in any nursery, so whether intentionally or not, there’s a bit of Calder in most of our babies’ eyes as they gaze up from their cribs).

On Tuesday, Yasmine and Maverick finally headed to LACMA for a mommy/son date. They got their tickets to see both the James Turell exhibit (another must for flexible little minds) and the Alexander Calder one. Both are amazing, but the Calder exhibit is pure magic. On that afternoon, Maverick was the only kid in the room.  Seeing Calder through his eyes not only enchanted his mama, but also put a smile on the security guards’ faces. Maverick asked what each mobile was made of and began plotting a home art project.

Since then, Maverick has invited Soraya’s brood along to LACMA to show them Alexander’s “cool projects,” as if Calder was his buddy from school.  This time, he has requested to go on a Thursday, Friday ,or Saturday so he can see the cars zip through Chris Burden’s “Metropolis II,” too. Yasmine can only imagine the home project that might be inspired by that experience. Holy hot wheels.

With seven children ranging in age from one year to seventeen years between them, sisters and bloggers Yasmine Delawari Johnson and Soraya Delawari Dancsecs are experts at parenting in L.A. They take a break from PTA board meetings, cooking, and producing films to blog at CityThink each Thursday.