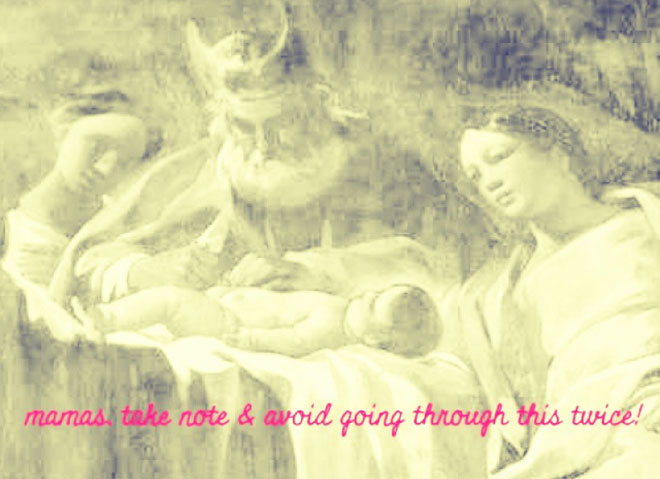 There are some things that can only be written about when your child is too young to read your blogs. Circumcision is one of them. The decision as to whether or not to circumcise is a private one. Religion, health concerns, and whether or not you want your son to “look like Daddy” might play a part. Then, if you do decide to do it, you need to decide who will handle the procedure and who will be present.

When Maverick was born, Yasmine’s husband Matt was still recovering from witnessing their older son’s procedure twelve years earlier. Yasmine and Matt decided their extremely trusted, gentle mannered OB/GYN would perform Maverick’s circumcision in the hospital. When the time came, they held their breath and prayed it would be quick and something that would not haunt his budding psyche. The Cedars Sinai nurses offered some basic instructions about cleaning the area while it healed, and in their minds, the experience was behind them.

What did they didn’t know then is there’s a barely discussed yet common thing can happen with baby boy’s circumcision: The foreskin can reattach. If you Google this, you will find pages of information on penile adhesion. But if nobody mentions it to you—your OB/GYN, your sister who has had a son, your husband who by virtue of being a guy should be somewhat of an expert, your pediatrician, other moms, nurses in both the hospital and in your doctor’s office—you wouldn’t know to search. Until that is, you start wondering if your baby boy’s penis looks the way it should. That’s what happened to Yasmine. Her fears were confirmed just shy of Maverick’s first birthday. While in a Mommy & Me class, Yasmine aired her concerns. A fellow mama in class happened to be a pediatric nurse practitioner and offered to take a look. It turned out half of Maverick’s foreskin had reattached. “What is the solution?” Yasmine asked. The fellow mama paused, looked at her with “brace yourself” eyes, and said, “A doctor will most likely manually force the skin down.”

Yasmine had worried about the long term physical and mental scarring circumcision might incur at birth, and now here she was thinking about her one-year-old having to endure what sounded like a form of medieval torture.

She marched into Maverick’s one-year doctor appointment infuriated and prepared for the worst. She sat with their pediatrician, who she absolutely loves, and wondered aloud how everyone missed this as it was happening.  Her doctor’s office happens to have a number of patients whose parents choose not to circumcise their children, so at each of Maverick’s visits, when examined, things looked normal—for an uncircumcised penis.  Her doctor calmed her down; he said he could send Maverick to a urologist who would force the skin back but instead recommended that they do nothing at all, explaining this problem very often fixes itself before a boy’s fourth birthday. Yasmine made him promise it would, that she wouldn’t be bringing a four-year-old in for some horrific corrective procedure down the line. He did, citing ways in which the normal growth process lends itself to correcting this situation naturally.

Yasmine prayed the day would not come when she would prove her doctor wrong. And as the years passed, she did notice improvements. Finally, around age three—a year ahead of her doctor’s prediction—all looked normal.

After that Yasmine vowed to tell every mother who was having a baby boy her story, since her and Maverick’s experience could have been avoided had she known what to look for and how to keep the reattachment from the happening in the first place. If you’re looking to take preventative measures with your own son, talk to a pediatrician; they may recommend gently pulling back on any remaining foreskin during diaper changes and baths, or applying Vaseline to the area.

Circumcision, and its sometimes unexpected consequences, may not be one of the things new parents want to talk about—not when it’s so fun to focus on setting up a nursery and welcoming a new little person into a family—but it’s important. And that’s what mamalas, women who have been there before, are for.