Home Uncategorized MamaLA: In Defense of the Elf on the Shelf 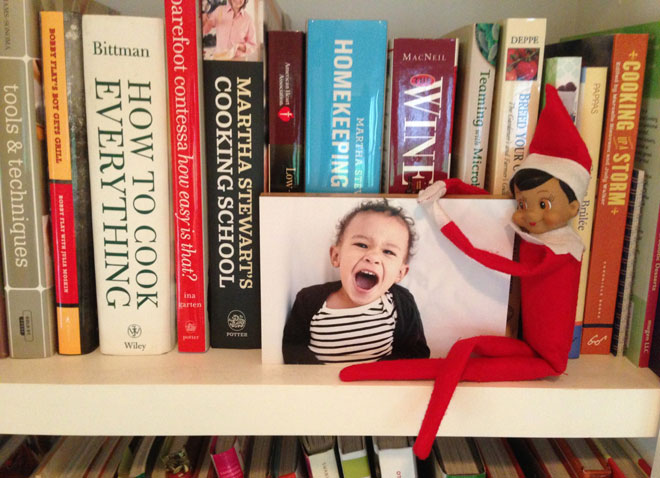 We are complete suckers for traditions.  We love them.  We carry them on, we create new ones and we know that reinforcing these special rituals will stamp colorful memories into little minds.  But ah, The Elf on the Shelf.

We are guessing y’all more than know about The Elf by now, but just in case… The Elf comes with a lovely children’s book that tells the tale of this tiny nymph’s work.  Every Christmas, The Elf magically appears in our homes. Straight from the North Pole, this secret agent comes with a purpose: He is an observer sent to watch all and report back to Santa. He flies to meet with Santa overnight, gives his daily update, and then returns to our homes by morning.  When he returns, he picks a new vantage point—a shelf or table—from which to do his spying.

A few things to note: There are fair elves and brown elves and light-eyed and dark-eyed elves.  There are both girl and boy elves.  Some elves are fashionistas and don tiny elf skirts. Others do not. Elves are named by their host families.  Yasmine’s was first called “Baby Elf” and is now known simply as “Elfie.”  Soraya’s family has named their elf Mason Peter “Messi,” after the Barcelona soccer phenom.  You can only imagine his mad skills at the Dancsecs home!

While it’s the elves’ main mission to determine whether your children have been behaving, they also keep moms and dads on their toes. Yasmine and Matt keep tabs on The Elf’s whereabouts via text, just to make sure he’s found a new place to hang.  Soraya’s friend, Marilyn Yang, has the good fortune of having a young daughter, Jada, who rises at 4 a.m. so she can see where Elf has landed.

Why do we make these creatures welcome visitors in our homes? Because they do Santa’s dirty work so parents don’t have to be the bad guys ratting out our kids to the big man in the red suit.

Just be warned: taking care of an elf requires iPhone alerts, clever ideas, reaching great heights (Elves seem to like perching waaaay up high) and sometimes even medical attention. Such was the case with our friend, Wendy Silver. The Silver’s elf is a daredevil.  A nice Jewish elf—equal parts mazik and schlemazl—this little guy (much like Wendy) finds himself in some interesting circumstances.  Yankel, as he’s called, recently learned that it’s a really bad idea to hide in a sconce, especially when it has been turned on. That’s a third degree ouch!

We wanted, for this post, to reach the mom and daughter team who discovered the very first Elf on the Shelf.  We put in calls to our connections at WMEA and CAA (L.A. elves have the best representation), but alas, we came up empty handed. Apparently, ever since a deal was struck with Pottery Barn for all sorts of Elf on the Shelf merchandise, some of the elves’ closest friends are in St. Barts while we are playing St. Nick.