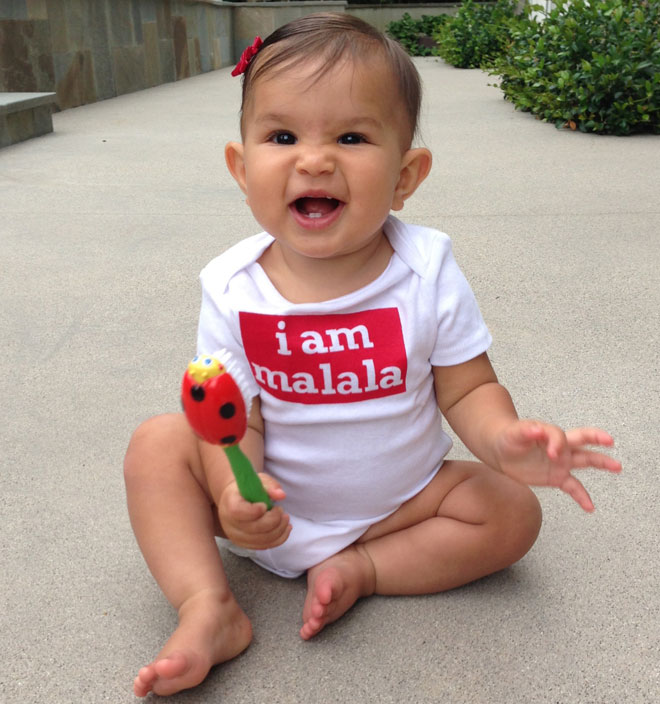 On October 9th, 2012, while Yasmine and Matt were expecting their baby girl in Los Angeles, another girl, a courageous advocate for universal education and girls’ rights, Malala Yousafzai, was targeted and shot by the Taliban in Pakistan. On November 1, 2012, Matt and Yasmine welcomed their baby girl. They named her Malala.

Tomorrow is Malala Yousafzai’s 16th birthday. To celebrate her brave and miraculous life, she will stand before the UN General Assembly in New York and make her first public speech since the shooting.  She will deliver a set of education demands written by youth.  On this day, children from all over the world will descend upon the United Nations for a “Youth Take Over” to honor Malala Day.

Yasmine and Soraya were born and raised in Los Angeles. As Afghan-Americans, we along with our sister, Ariana Delawari, were raised with the knowledge that our privilege was largely due to luck and geography. We didn’t have to look far to see different circumstances. Our La Canada childhood home played host to many refugees fleeing Afghanistan, which was then occupied by the Soviet Union. On one occasion we watched our baby sister, Ariana, play alongside an Afghan child, brought to Los Angeles to receive treatment after losing his hand to a Soviet mine devised to look like a toy. It taught us that because children are the future, they become targets for those who seek to threaten freedom and democracy.

When Malala Yousafzai was shot, girls from around the world created shirts and headbands saying “I am Malala.” Our parents, Noor and Setara Delawari, had three girls; we have seven children between us, four of which are girls, so “I am Malala” resonates. Yasmine’s youngest is the literal representation of that recognition.

Like Malala Yousafzai, Yasmine’s oldest, Kailey, is also 16 years old. A stellar student, Kailey attends L.A.’s remarkable Marlborough, an all girls school with a long history of empowering young women. With SATs and AP exams behind her, she, and so many Angeleno girls, will soon start the arduous process of college applications.

While considering where Kailey will go to college, Yasmine and Matt will simultaneously start thinking about our little Malala’s life in Los Angeles.  Where will she go to preschool?  What teaching methodology will serve her best?  Will she attend public or private school?  All the while, we will reflect on the 61 million children around the world who don’t have those options. We will stand with Malala.

Tomorrow, take a moment to reflect. Read Malala Yousafzai’s online petition and consider adding your name. Los Angeles is a great city, and a powerful place to be a girl.  Your daughters are Malala.  We are Malala.  And, of course, the youngest of our bunch is the embodiment of an everyday reminder: I am Malala.

With seven children ranging in age from eight months to sixteen years between them, sisters and bloggers Yasmine Delawari Johnson and Soraya Delawari Dancsecs are experts at parenting in L.A. They take a break from PTA board meetings, cooking, and producing films to blog at CityThink each Thursday.