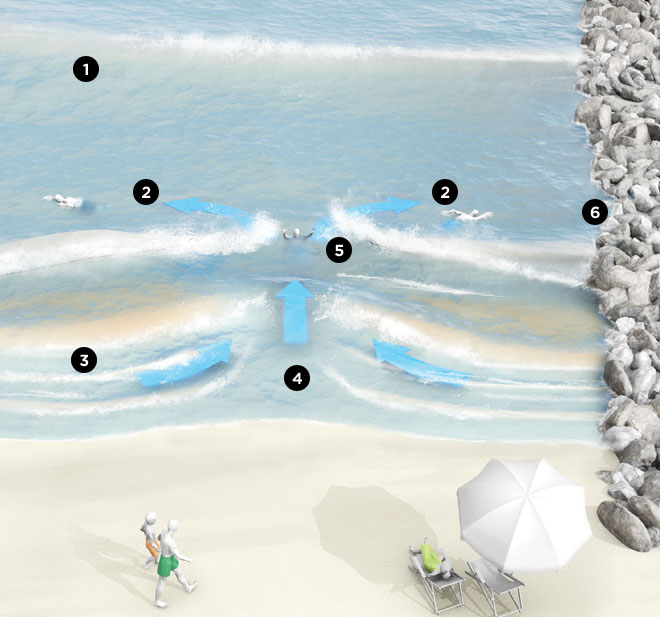 A riptide is a powerful mass of shallow ocean water that moves anywhere from one to eight miles per hour. That may not sound fast, but more than 100 people drown in riptides every year nationwide, and 80 percent of the country’s riptide rescues occur in California. Here’s a breakdown of the Pacific’s most treacherous tidal phenomenon and the strategy for not getting sucked in.

1. The Uprush
Large waves, or occasionally wind, cause excess water to build up on the beach. The water in a rip current is choppy and often brown from whirling sand. As more breakers push toward the shore, the water has nowhere to go.

2. The Safety Zone
Rip currents can be spotted from the shore; they are the distinct spaces between breaking waves. The key to escaping a riptide is to swim out of—not against—it and parallel to the shore. Once outside of the rip, swimmers can use the waves to navigate to shore.

3. The Route
The rip flows sideways, searching for a route back to sea. It runs parallel to the shore until it finds a break in the surfline, or a trough.

4. The Trough
The sideways-flowing water rushes quickly seaward, along the trough and out past the breaking waves. A current is formed and pulls anything in its path with it. This is where a swimmer can get trapped.

5. The Current
Developing close to the surface, the current (often erroneously dubbed the “undertow”) drags a swimmer out to sea, not underwater. The danger in swimming against a fast-moving rip is fatigue. Eventually the current runs its course and a swimmer can return to shore.

6. The Obstructions
Man-made objects in the surf increase the chance of riptides. Troughs are created in breaks in the sandbar, along the edges of a jetty, or beneath a pier.