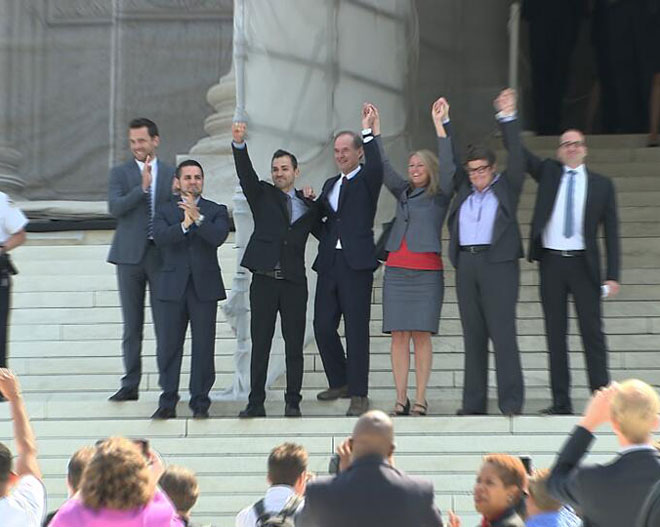 SCOTUS clears the way for same-sex marriage in the state of California. Photograph courtesy Twitter.com/msnbc

Three-and-a-half years after California voters passed Proposition 8, the Supreme Court of the United States handed down its ruling today on the case Hollingsworth v. Perry, regarding the law banning same-sex marriage in this state. As many court watchers predicted, the judges confirmed that, because the proponents of the proposition before the court were citizens and not representatives of the State of California, they had no standing to appeal a lower court’s decision. In a syllabus released with its formal opinion, the court states, “No matter how deeply committed petitioners may be to upholding Proposition 8, that is not a particularized interest sufficient to create a case or controversy [under the law].” You can see the full syllabus and opinion here.

Here’s how opponents and proponents of the prop are responding to today’s news:

Governor Jerry Brown
THEN: Brown was California’s Attorney General when Proposition 8 passed in 2008, so it was his responsibility to respond to lawsuits brought against the state regarding the ban. In a legal brief, Brown argued the proposition should be overturned.

NOW: “After years of struggle, the U.S. Supreme Court today has made same-sex marriage a reality in California. In light of the decision, I have directed the California Department of Public Health to advise the state’s counties that they must begin issuing marriage licenses to same-sex couples in California as soon as the Ninth Circuit confirms the stay is lifted.”

The Church of Jesus Christ of Latter Day Saints
THEN: The Mormon Church loudly encouraged its members to raise funds and support for the proposition. Protect Marriage, the official proponent of Prop 8, reportedly estimated about half of the donations they received came from Mormon sources.

NOW: “By ruling that supporters of Proposition 8 lacked standing to bring this case to court, the Supreme Court has highlighted troubling questions about how our democratic and judicial system operates. Many Californians will wonder if there is something fundamentally wrong when their government will not defend or protect a popular vote that reflects the views of a majority of their citizens.

In addition, the effect of the ruling is to raise further complex jurisdictional issues that will need to be resolved.

Regardless of the court decision, the Church remains irrevocably committed to strengthening traditional marriage between a man and a woman, which for thousands of years has proven to be the best environment for nurturing children.  Notably, the court decision does not change the definition of marriage in nearly three fourths of the states.”

NOW: “Today is a momentous and joyful day for those of us who believe that our government should not legislate who we love and who we choose to commit to through the vows of marriage. Both DOMA and California’s hateful Proposition 8 were the results of a campaign of fear, waged to ‘protect’ against a threat that has never existed. The commitment to love by one consenting couple will never threaten the marriage vows of another such couple. I am very pleased that laws making any such love and commitment illegal will no longer be the law of our land. I congratulate those men and women who have fought toward this day with a simple goal in mind, to prove the staggering concept that all people are created equal. Their love is equal to the love I share with my wife. Today, that equality has been written into law.”

L.A. County Supervisor Zev Yaroslavsky
THEN: Yaroslavsky wrote a blog post about the shift in his views on same-sex marriage (the result of a conversation with his daughter). Yaroslavsky has supported equal rights for gay and lesbian couples for most of his career, but he’s only championed same-sex marriage for the past ten years.

NOW: “Today is a great day for equal justice under the law. The Supreme Court rulings are a victory for the right of gays and lesbians to marry the person they love. The affirmation of this fundamental right is a long overdue and welcome one. The Court’s essential message is this: Equal justice under the law applies to everyone in our society, without regard to race, religion, sex or sexual orientation. As such, today’s decisions are also a victory for equal rights for all Americans. When one individual, or one group of citizens, is denied this fundamental constitutional protection, all of our rights are jeopardized. When one of us is picked on or discriminated against, all of us are vulnerable to the same treatment. The ruling on DOMA could not be more clear: Gays and lesbians are entitled to the same constitutional protections as everyone else. While the decision on Proposition 8 ensures the right of gays and lesbians to marry in California, it is now inevitable that the rest of the country will, in due course, be afforded the same constitutional right. I’m disappointed that, well into the 21st century, these rights were upheld by only the slimmest of majorities. But today’s rulings taken together constitute a giant step forward in our republic’s journey to a more perfect union.”

Speaker of the U.S. House Of Representatives John Boehner
THEN:  Earlier this year, Boehner renogotiated attorney Paul Clement’s contract  for a third time to defend DOMA in the Supreme Court, upping the budget from $500,000 to $3 million.

NOW: “A robust national debate over marriage will continue in the public square, and it is my hope that states will define marriage as the union between one man and one woman.”

President Barack Obama
THEN: In 1996, he was for gay marriage. In 1998, he was undecided. In 2004, he was a “fierce supporter of domestic-partnership and civil-union laws.” In 2007, “I am a strong supporter not of a weak version of civil unions, but of a strong version, in which the rights that are conferred at the federal level to persons who are part of the same-sex union are compatible.” In 2008, he said, “I believe marriage is between a man and a woman. I am not in favor of gay marriage,” but conversely he was not in support of Prop 8. By 2012, he had settled on a stance: “I’ve just concluded that for me personally it is important for me to go ahead and affirm that I think same-sex couples should be able to get married.”

NOW: “I applaud the Supreme Court’s decision to strike down the Defense of Marriage Act. This was discrimination enshrined in law. It treated loving, committed gay and lesbian couples as a separate and lesser class of people. The Supreme Court has righted that wrong, and our country is better off for it. We are a people who declared that we are all created equal — and the love we commit to one another must be equal as well. This ruling is a victory for couples who have long fought for equal treatment under the law; for children whose parents’ marriages will now be recognized, rightly, as legitimate; for families that, at long last, will get the respect and protection they deserve; and for friends and supporters who have wanted nothing more than to see their loved ones treated fairly and have worked hard to persuade their nation to change for the better.”

Other noteworthy reactions from around the Web:

Decision by Supreme Court to strike down DOMA makes this a great day for equality in our country.

And with #Prop8 decision, California joins 12 states and D.C. in recognizing that all Americans are equal, no matter who you love.

“Today, we have taken another momentous step on the path to full equality and dignity…” -AV. READ FULL STATEMENT–>http://t.co/cR1nvlOTAd

NBC Nightly News With Brian Williams has published this statement from President and Secretary Clinton: “By overturning the Defense of Marriage Act, the Court recognized that discrimination towards any group holds us all back in our efforts to form a more perfect union. We are also encouraged that marriage equality may soon return to California. We applaud the hard work of the advocates who have fought so relentlessly for this day, and congratulate Edie Windsor on her historic victory.”

A New Testament: How The First Congregational Church of Los Angeles Is Preparing To Marry Same-Sex Couples