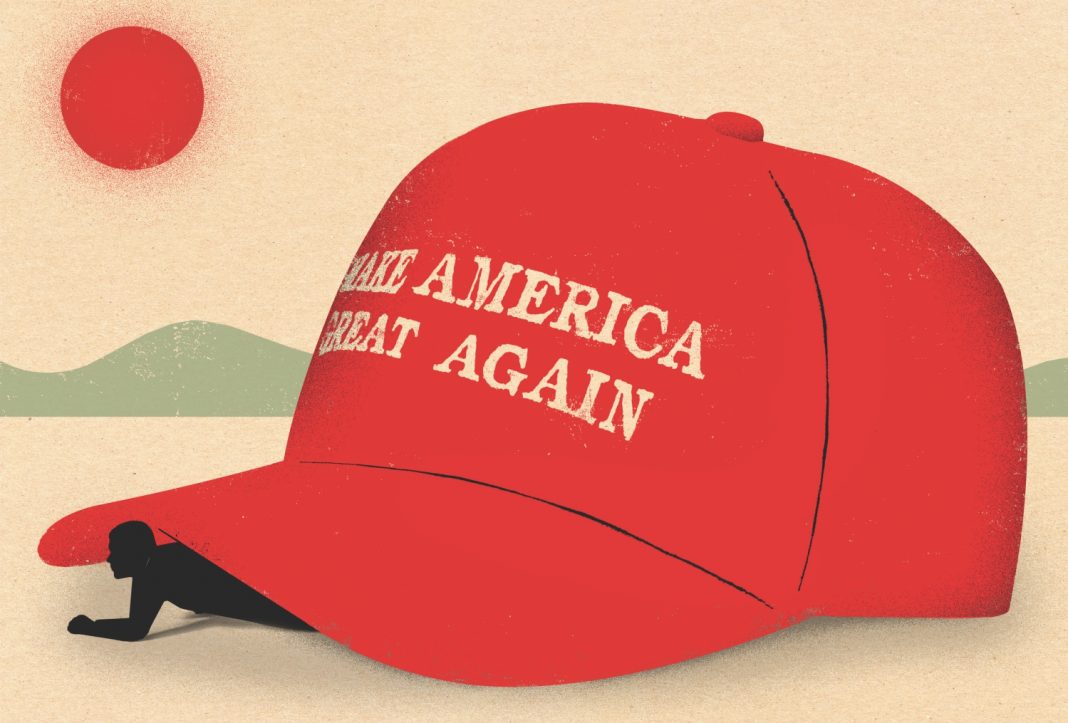 I would not do well in an honor culture. As much as I love my mother, if a Hatfield and a McCoy mocked her in front of me, I’d respond, “She’s also a little self-involved.” So I don’t like that politics have become so tribal. More than 42 percent of people in each party think those in the other party are “downright evil”; 20 percent of Democrats and 16 percent of Republicans think we’d be better off if members of the other party “just died.” The anger is so ubiquitous that even I’ve been infected. I saw an elderly man walking toward me on the Ferndell Trail in Griffith Park wearing a red hat, and I hate-stared him until he got close enough that I could see it had a USC logo on it. I avoided talking to a nice dad at my son’s old school because there was a rumor that he voted for Trump.

Researching political tribalism for my upcoming book, In Defense of Elitism, I spent a week in the county with the highest percentage of Donald Trump voters—I did not pay for one meal while I was in Miami, Texas. That’s partly due to the fact that I didn’t eat out often because there’s only one restaurant there. But it’s also because the people were so nice that they fed me in their homes or paid the server before our check arrived.

I worry that my side isn’t as friendly. We’ve harassed politicians out of restaurants, chanted threats outside a Fox News anchor’s home, and gone off on me for asking other parents if putting on a play about Native Americans despite the fact that there are no Native Americans in our school is really that evil. To find out once and for all, I decided to wear a Make America Great Again hat to the liberal epicenter of Los Angeles: Café Gratitude, the vegan hipster restaurant in Larchmont.

This is a place so liberal it has a Chief Inspiration Officer and supports regenerative agriculture. For a little while, it sold a red hat that said “Make American Grateful Again.” Then customers demanded the restaurant stop, because it was taking the evil of Trump too lightly. Café Gratitude is far more liberal than Wursthall in San Mateo, where co-owner J. Kenji López-Alt had tweeted that he wouldn’t serve anyone in a MAGA hat. It’s far more liberal than Starbucks, where, in Palo Alto, a young female customer accosted a 74-year-old in a MAGA hat, yelling, “Everybody come here! This guy’s a racist! This guy hates brown people.” It’s way, way more liberal than the Cheesecake Factory, where servers in Miami were fired for harassing a man in a MAGA hat.

I didn’t want to give $25 to Trump’s re-election campaign, so I bought a knockoff hat made in China for $8 on Amazon. The hate is so strong in me that I thought it was more ethical to support the Chinese government than Trump.

A little before noon on a Saturday, I said goodbye to my lovely wife, Cassandra, who offered me half of a Xanax, which I foolishly refused. On my way to the restaurant, my nine-year-old son, Laszlo, grabbed Cassandra’s phone and texted me a string of emoji (siren, ambulance, three hearts), the words “good luck,” and then two more emoji (open-mouth face with X’s for eyes, skull). He was right. Not that long ago, a guy was beaten so badly he was put into a nine-month coma—for wearing a San Francisco Giants hat to Dodger Stadium. I was going to turn around and go home, but I had already spent the $8.

After parking two blocks from the restaurant, I put my MAGA hat on for the first time and looked in the rearview mirror. I looked smug. I looked mean. I looked like someone I wanted to punch.

My heart thumped and my vision narrowed as I walked up Larchmont Boulevard. I jaywalked in a daze and then passed three women who, to my surprise, didn’t stop their conversation to confront me. As I approached Café Gratitude, I saw that the patio was packed. I feared I’d have to wait for a seat, milling about alone and exposed. I scurried to the host stand and asked if I could order lunch at the nearly empty bar. She barely nodded yes before I was sitting there, looking straight ahead, avoiding eye contact. A few minutes after I sat down, the one guy at the bar who had been typing on his computer left, undoubtedly to make a statement about Donald Trump. I was going to have the entire bar to myself in this crowded restaurant.

I stared at the options, trying to decide between a bowl of kale called I Am Grateful or a bowl of lentils called I Am Humble because I could not find a bowl called I Am Scared Shitless.

A young black waiter with a shaved head and hipster beard handed me a menu, calling me “sir.” Then he pawned me off on another waiter, a Mexican guy with two earrings.

“Have you been here before?” he asked.

“So you know that we have an organic and plant-based menu,” he said, as if that would get me to leave—and it almost did.

I stared at the options, trying to decide between a bowl of kale called I Am Grateful or a bowl of lentils called I Am Humble because I could not find a bowl called I Am Scared Shitless. I asked for I Am Grateful and a glass of something called Gutsy, which unfortunately turned out to be French Canadian kombucha without any alcohol.

I glanced around the room, and no one gave me a dirty look. No one walked up to yell at me about Charlottesville or caged children. The guy with the ear twig pulled out a newspaper called the SJW, which I figured was a publication for Social Justice Warriors until I looked again and saw it was The Wall Street Journal. He started a friendly conversation with the black woman, during which they both glanced at me. I eavesdropped, suspecting to hear them talking about me. Or The Wall Street Journal. They were talking about almond milk.

My Mexican waiter walked over to the black woman and asked if she’d been here before.

“So you know that we have an organic and plant-based menu,” he replied.

Before I left, I asked the black waiter, Darick Thomas, how he felt about my hat. “I don’t care. At all. Really. At all! I look at a hat and that doesn’t tell me who the person is,” he said. “I’m not against Trump. He says some smart things; he says some dumb things.” Darick didn’t vote. “Voting is the illusion of choice for the masses,” he explained.

Jose Reyes, the double-earring-ed Mexican waiter, assumed Darick asked him to take my order because he didn’t want to deal with me. But Darick was just slammed with drink orders. “I was uncomfortable, but I wasn’t going to say anything,” Jose said about
my hat, putting his hands over his mouth as if he were embarrassed about judging me. When I thanked him for being so nice, he said, “Sometimes the best way to defeat the enemy is to give a smile and maybe a hand.” Or a local seasonal kombucha.

The satin jacket guy to my left, James Law—a photographer who really does practice Muay Thai—didn’t buy me as a Trump supporter. “Your disposition doesn’t match the hat. You have a warm, open vibe about you. Usually there’s an air about individuals who wear the hat,” he said. When I asked what that air was, he responded, “They’re looking for trouble, dude. Looking to speak their minds and not listen to anyone else.” His dad voted for Trump. I’m sure lots of people in the restaurant had someone close to them who wear this hat. James and I spent about 15 minutes talking, during which I asked, “Aren’t you worried that people see you talking to the MAGA hat guy?”

He responded, “I am exercising caring less about what other people think,” which I think is a great name for a bowl with acai, chia, and flax.

The only comment the people who worked at Café Gratitude heard during the hour I was there was one from a regular at the takeout counter: “Is that guy wearing a fucking MAGA hat?”

I took my hat off and went to my car feeling better about our country. Then I remembered a photo my friend Phil showed me a few months ago. He was with his kids at the park when a bunch of women dressed like fairies descended on the area for some kind of Instagram gathering. His photo framed three fairies frolicking with a guy who had a swastika tattoo on his neck. Which means there’s a guy walking around Los Angeles with a swastika tattoo. And no one is beating him up.

The far right has become so normalized that no one said anything to a guy in a MAGA hat at Café Gratitude. I Am Not Sure How Great That Is.