Home Transportation This Radical Reimagining of Wilshire Hints at a Future Where We Waste... 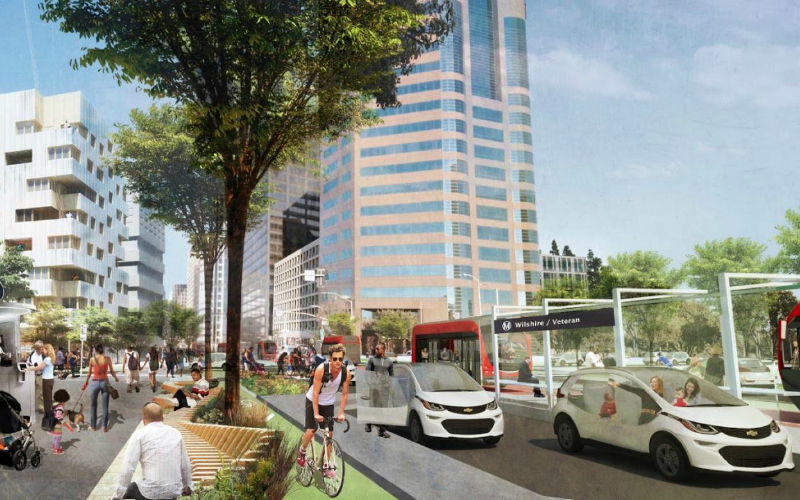 That’s the solution being proposed in a study commissioned by ride-sharing company Lyft in collaboration with architecture firm Perkins+Will and transportation planning specialists Nelson\Nygaard.

Lyft posed a big “what if?” to the experts and asked how they would redesign Los Angeles to cut down on traffic, specifically to address the goals of the 100 Hours Campaign, a project that Lyft is sponsoring along with the Southern California Association of Governments that takes its name from the 100 hours a year the average Angeleno is said to spend wasting away in traffic jams.

For this experiment Lyft turned the team loose on Wilshire Boulevard, specifically where it intersects with Veteran Avenue. They claim that their proposal would increase the people served by the stretch of road per hour by 160 percent while thinning the street down from 10 vehicle lanes to just five.

It works like this: Right now, Wilshire Boulevard has two sidewalks, two lanes where buses mingle with cars, and eight lanes for passenger cars, most of them with just a solo driver inside. They estimate that moves 29,600 people an hour down the street. If the designers had their way, they would slim the street down to just three general-use car lanes, dedicate two lanes exclusively to buses, add two bike lanes, and widen up the pedestrian sidewalks. That would get the street to 77,000 humans per hour assuming—and this is a pretty big assumption—that more people agree to ride in busses and four-person carpools.

Expanding carpooling from the current 9.3 percent of commuters to 20 percent by 2035 is baked into the city’s Mobility Plan 2035, but, of course, as a ride-share corporation, Lyft also has its own vested interest in promoting carpooling. The Lyft Line group ride-matching service would be, in this concept, a key part of growing the city’s carpooling numbers.

In addition to carpools, the plan would see more bikers and walkers (thus the designated bike lanes, wider sidewalks, and new “parklets” with seating and landscaping) and encourage more people to ride on public transit. Right now, L.A. buses have a pretty bad reputation when it comes to being on time (almost a quarter of buses show up late in a given day) due in large part, the experts suggest, to the fact that on many of the city’s congested thoroughfares, the buses are stuck in the same unpredictable traffic as everybody else. The concept here builds dedicated bus lanes, physically separated from the main traffic lanes almost like an above-ground light-rail, meaning they can zoom along from stop to stop without getting bogged down. In theory, as reliability and on-time arrival rates increase, so too does ridership.

While this is all just in the concept stage for now, the experts Lyft worked with to create the plan are known for taking on these sorts of projects in the real world. Perkins+Will recently oversaw the restoration of San Francisco’s historic City Hall and created long-term campus development plans for the University of California; Nelson\Nygaard has written award-winning transportation and sustainability plans for Palm Springs, the Bay Area, and even Abu Dhabi.

“Together, the result will be stronger, greener, and healthier communities,” Lyft’s senior director of transportation policy wrote in an explanation of the project.

But will it actually work? Are Angelenos willing to give up driving alone in favor of other modes of transit? That remains to be seen. And there’s another wrinkle, too. For all the good that an app that helps you find an ad-hoc carpool would seem to do for easing traffic, studies about ride-sharing in general have seemed to imply the opposite. As CNN reports, one study in New York City found that the availability of on-demand ride-sharing in the city added 600 million car miles driven over the last three years and that, in the last seven years, average driving speeds have actually dropped by 13 percent.