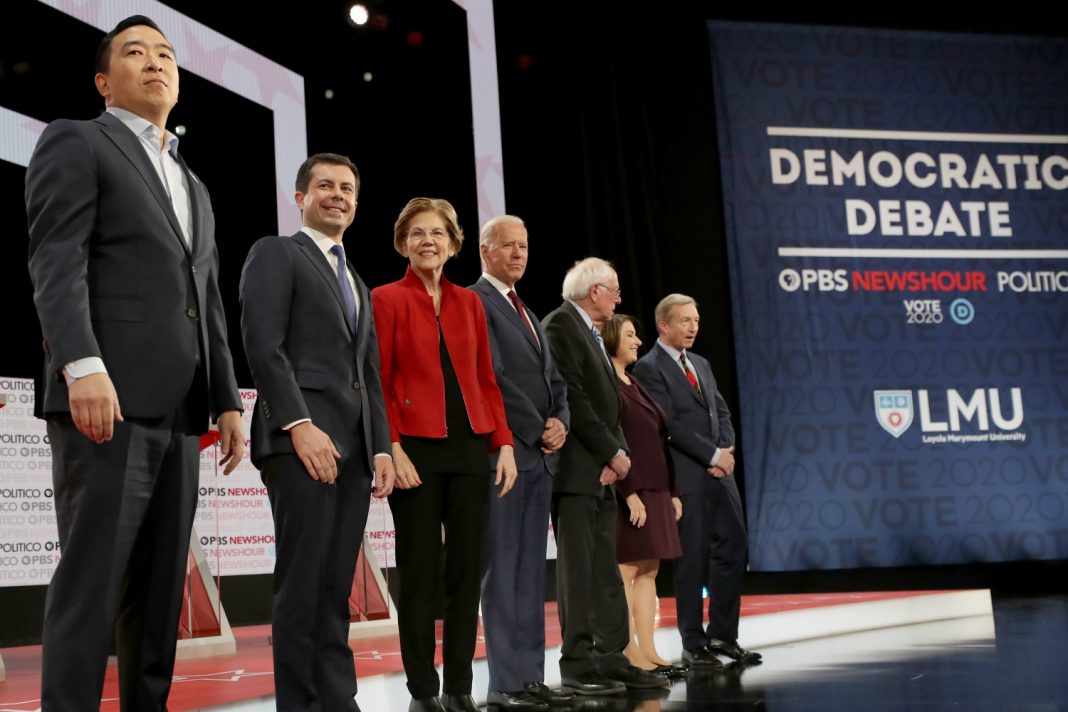 It was an event planner’s worst nightmare. In the days leading up to last week’s Democratic presidential debate, the Democratic National Committee was facing the possibility that it might have to cancel the event because of a labor dispute on campus. When contract negotiations between food service workers at Loyola Marymount University—the debate venue—and their employer, Sodexo, stalled and workers threatened to protest, all the participating presidential candidates said they wouldn’t cross the picket line. The debate had already relocated once because of a labor dispute at UCLA.

But what started as an organizational debacle for the DNC became a bargaining boon for workers. With the national spotlight on Sodexo and pressure from DNC chairman Tom Perez, the multibillion-dollar food service company caved to the employee’s demands. A process that had dragged out for months was resolved in just a few days.

“[The candidates] deserve a lot of credit because the debate is a really valuable tool for them to reach out to the nation, and yet they were willing to stand by 150 workers who were trying to win livable wages and affordable healthcare,” says Susan Minato, executive vice president of Unite Here Local 11, which represents the Sodexo employees. “The DNC ought to be congratulated for backing up the Democrats who took this action.”

It was announced last Tuesday morning that the two sides had hammered out a three-year contract that gave workers a 25 percent wage increase and a 50 percent decrease in healthcare costs. Many of the workers previously made less than $15 an hour.

Sodexo and United Here had been negotiating a new contract since December of last year. While tensions sometimes boiled over, resulting in picket lines and student protests, the two parties remained committed to negotiations.

In November, Sodexo countered the union’s demands, announcing that employees would have to give up holidays for raises and lowered healthcare costs. Specifically, workers would lose New Years Day, Thanksgiving Day, and the day after Thanksgiving—the high holy day of shopping, Black Friday.

Sodexo’s position sparked protests among students and professors, who have long spoken out against high cost, bad food, and poor working conditions at their cafeterias. Advocates for dropping Sodexo pointed to its network of 122 prisons and immigrant detention centers around the world.

Around this same time, UCLA’s largest employee union, AFSCME Local 3299, called for a boycott of speaking engagements at any of the University of California institution amid a nearly three year labor dispute.

“In response to concerns raised by the local organized labor community in Los Angeles, we have asked our media partners to seek an alternative site for the December debate,” DNC senior adviser Mary Beth Cahill said in an emailed statement to Politico, scrapping the UCLA location.

Loyola Marymount University, located just 10 miles away from UCLA’s Westwood campus, presented itself as an easy alternative. The ongoing talks between United Here and Sodexo didn’t raise any red flags. After all, negotiations between unions and employers, however contentious, are routine. But ten days left before the debate, Sodexo walked, telling the union that they would resume talks in the new year.

“When a party—either side frankly—but when a party abruptly cancels, especially when there’s such a high profile event coming, that was surprising to us,” Minato says.

Sodexo declined to discuss details of the negotiation. But in an email, the company included an earlier statement disagreeing with Minato. “Sodexo is 100 percent committed to reaching an agreement, and any statement that we have left the bargaining table is not accurate,” the statement reads.

Taking a page from UCLA’s union, United Here Local 11 sent out a press advisory and messages to the campaigns asking for support.

“Elizabeth Warren’s campaign answered first—within minutes actually—and said she would not cross any picket line to go to the debate,” Minato says.

.@UniteHere11 is fighting for better wages and benefits—and I stand with them. The DNC should find a solution that lives up to our party's commitment to fight for working people. I will not cross the union's picket line even if it means missing the debate.

Within hours of Warren’s Friday the 13th tweet, the entire Democratic field had committed to not crossing the picket line. That same day, scrambling to keep up with the situation, DNC Chairman Tom Perez entered the picture. “He was extremely helpful and he spoke to all the parties to try to get us back to the table,” says Minato.

After Perez reached out and with headlines drawing attention to the dispute, negotiations resumed on Monday. Minato says she doubts that the union would have won the same concessions without the DNC applying additional pressure. Not only did employees get raises and more affordable healthcare, but they also kept Black Friday.

“Adding interest from other outside groups sometimes can be helpful.”