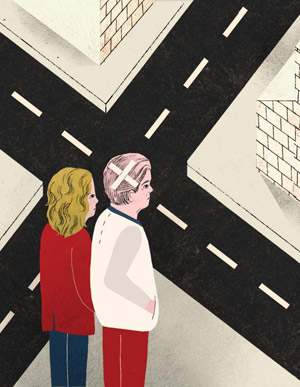 To mark my husband’s 83rd birthday, we have driven to South-Central Los Angeles (called South L.A. now), to the exact spot where he was almost killed 44 years ago while covering a ragtag protest that blew out of control. What I find astonishing is that we had not done this before. A reporter by training and a naturally curious person, I never prevailed on him to bring me here. I am not sure why. We had come to the area through the years, for a story one of us was working on or a meal, but I had not stood at the intersection of 84th and San Pedro, precisely where, all those decades before, angry young black men came up behind Karl and bashed him on the head. He is standing in the sun now, my aging mate in his winter-weight sport coat—he runs cold these days—pointing across the street.

“There was a liquor store, and someone threw a rock through it, and that was the last thing I remember,” he tells me.

I have seen the newspaper photograph—Karl lying on the ground in a pool of blood, a colleague leaning over him, with the weapon used to take him down, a roughly five-foot plank of wood, at the top of the photo. I half expect to see it lying near our feet even though the day is totally benign. A handful of pedestrians walk across the street, and a few pit bulls tethered in nearby yards bark. The streets off San Pedro are full of small, mostly well-cared-for stucco bungalows with grillwork at the windows. There is nothing to suggest the fear and rage and violence of that era, and yet being on this corner makes the episode more vivid. I can picture the roaming bands of demonstrators, hear the shattering of the glass window, feel the tension Karl says was ever present in Watts. The head of the Newsweek L.A. bureau, he had been in the city for little more than a year. A Southerner, he had spent his working life as a reporter on his native turf. He had covered the major battles of the early 1960s, the church bombing in Birmingham, Alabama, where four young girls died, and the murders of three civil rights workers—Andrew Goodman, James Chaney, and Michael Schwerner—near Philadelphia, Mississippi. He had figured L.A. to be a respite but found a place deeply segregated and white cops as scary and mean as any he had encountered in the South.

“I thought this place would be sunny and easygoing and full of kooks,” he says. “But here was this huge ghetto of black people that nobody knew much about until Watts exploded. It was so different from where I’d been. Down south, the black marches were organized and generally orderly. This place just came unglued. It was like a revolution down here.”

My husband is looking around, seeing a few ghosts, though he is not given to nostalgia or sentiment. He doesn’t dwell on the past—he isn’t one to revel in old exploits or achievements—which may be another reason we haven’t made this outing before. Were you scared back then? I ask. Karl grew up in an orphanage in North Carolina and had learned to defend himself early on. He was a self-proclaimed tough guy, big and handsome and profane—and a fearless, impassioned journalist.

“I was more scared here than on the back roads of Mississippi,” he says. “There were plenty of angry white mobs down there, but you could always take refuge with black people in their houses or in their churches. Here there was no place to hide. Any white person was a honky motherfucker.”

That’s the phrase he heard moments after he came to. He was sure he was dying, and he was angry about it. A silly, demeaning way to go—that’s how he puts it—after all that had gone before.

As it turned out, he had a broken jaw, a fractured skull, and a few cracked ribs. He pulled through, and within months, on a friend’s tennis court in West Los Angeles, he and I met for the first time. His jaw was still wired up, which meant he was forced to talk through clenched teeth, and he had a crew cut. I had never seen anyone like him, the whole complicated, rough-edged package. He was 38 and I was 16, attending private school with his friend’s daughter at the Westlake School for Girls.

I had been aware of the riots, but in truth, the Watts of that time raised complicated emotions of fear and guilt and frustration among most whites, and the place itself seemed far away from my home on the Westside. South-Central was a locale of myth and mystery. Here was a connection to all that, a living, injured truth teller, if you will, from what virtually felt like a foreign land.

Two years later Karl and I fell in love. We looked like a jazzy if slightly scandalous L.A. couple. He drove a yellow Buick Skylark convertible, and when we went out in it, my long blond hair blew in the wind. We turned heads because of our age difference and—what shall we call it?—?our sizzle. Mostly we hung around with his friends, which made me feel oh so young. Other older men leered at me while their wives glared. The experience was both unnerving and heady. But beneath our transgenerational attraction there was a deeper draw, certainly for me, and it had to do with the broken jaw and Watts and all that Karl had written about. He was the ticket out of my cloistered girlhood, a witness to a dangerous, painful piece of the American story. I was amazed the first time I ran my hand over his head and felt the deep and permanent pleats in his skull left by that piece of wood. Through the years, when I have been upset with him or we have been out of sorts, going our own ways for a moment, I have been able to reel myself back by touching those crenellations. They represent who he is and why we are together and why, within a few years of our marriage, I, too, became a reporter and why we never left this city. We were both bound to it—its natural beauty, its contradictions, its ugly history—I, the ultimate native; Karl, the committed transplant.

Even after what happened to him on this street, he didn’t want to leave Los Angeles. As we drive around the neighborhood, he comments on the absence of hostility and wariness.

“Obviously this area is now probably equally if not more Latino,” he says. “I know there are gangs and gang violence, but in general it’s a much quieter place. A lot of that has to do with the cops. They stopped being an occupying force, and black people could breathe. That’s the biggest change of all.”

Still, the geography of L.A., and the habit of living in separate racial enclaves, remains a defining characteristic of the city. I doubt we’ll be back here. We have done it—a birthday foray, ultimately more meaningful and necessary for me than for Karl. In fact, it has been a big outing for him; his health has been iffy of late. The asthma that came on shortly after he was attacked has worsened; many days, he struggles to breathe. He has also developed a rare blood disease that makes him deeply tired much of the time. Karl had to rouse himself to accompany me. He has been patient standing in the warm sun chatting about what happened and letting me run my imagination.

Maybe he knew all along what I realized when we got home. I took him down there so I could picture him in his heyday, full of passionate anger and excitement. There’s something else, too: Thinking of him lying on that street unleashes in me a respect and a tenderness that, as we navigate our new reality, can elude me. In retrospect that was a big reason I pushed him to come with me to Watts. The birthday was just an excuse. I needed to see him, my old love, in that very spot in order to reinvigorate my kindness. I needed the snapshot. I needed to remember.