Home Transportation A Love Letter to the 110 Freeway 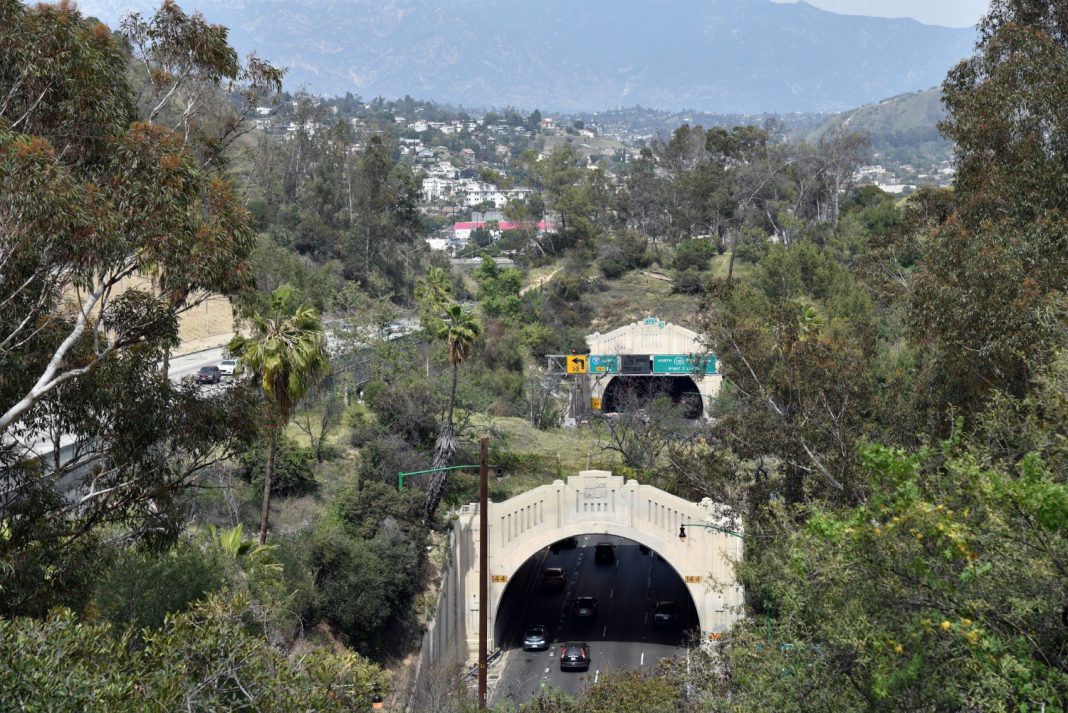 On a good day, driving the 110 can be lovely. Starting at its terminus in Pasadena and heading south at a mere 50ish miles per hour, you’re grateful that you don’t have to get off at one of those terrifying brake-and-swerve exits as you wind around un-banked turns on what feels like a pretend version of a freeway, an adult-sized Autopia.

There’s actual scenery here—trees casting shade on the asphalt, the grassy slopes of under-appreciated Ernest E. Debs Park abutting the freeway on your left, the Southwest Museum looming above you like a fortress to the right—and you follow the trickling Arroyo Seco until it joins the L.A. River on its own route south. It feels like what you’d imagine if you were hearing the term “parkway” for the first time.

Dedicated in 1940, the Arroyo Seco Parkway—only later dubbed the 110—was the United States’ original freeway, introducing limited-access on and off ramps for the first time. And yeah, all the problems of freeways were manifest immediately—traffic congestion was there from the get-go, foreshadowing the weekday nightmare that freeways would eventually become. But on a traffic-free afternoon nearly 80 years later, the drive is genuinely pleasant, and as you continue south, the history of freeways in California extends out ahead of you.

Downhill from Dodger Stadium, the downtown skyline rising above the treetops ahead, you cross Sunset and zip under the 101 in the first stacked interchange in the world. Completed in 1953, it marked the adolescence of the freeway system, a foretaste of its awe-inspiring, terrifying magnitude. In Joan Didion’s Play It as It Lays, her character Maria drives the freeways compulsively, returning repeatedly to this specific interchange:

“Again and again she returned to an intricate stretch of the interchange where successful passage from the Hollywood to the Harbor required a diagonal move across four lanes of traffic. On the afternoon she finally did it without braking or once losing the beat on the radio, she was exhilarated, and that night slept dreamlessly.”

That feeling of triumph at having bested the freeway is yours as you whisk through downtown, navigating that daunting series of forks and exits, only a little distracted by the gleaming hull of the Wilshire Grand towering overhead. And then it’s a straight shot due south, past USC, palm trees and the occasional church steeple rising above the wall that separates the freeway from the neighborhoods it slices through.

Before long, you’ve reached that wild snarl of concrete arteries that is the ten-story 110-105 interchange. Having driven under L.A.’s first stack interchange, it’s fitting that, as you near the end of your journey, you pass below its last and most ambitious—this redwood grove of concrete pillars (above which Keanu Reeves and Sandra Bullock soared in that runaway bus) was completed in 1993. It’s this specific interchange, for Eastsiders, at least, that signifies homecoming. Sailing around the bend in the 105 on your way back from LAX, there’s that moment when all of the L.A. basin spreads out below you—the light reflecting off the buildings of downtown, the San Gabriel Mountains rising in the distance—and you know you’re back where you belong.

For now, you glide below it all and continue to the harbor, where the 110 freeway comes to its gentle end. Hang a left and breeze across the Vincent Thomas Bridge, the sunset reflecting off the water below and lighting up a nation state of shipping containers, a patchwork of muted red, somber blue, jack-o’-lantern orange, maroon, and teal.