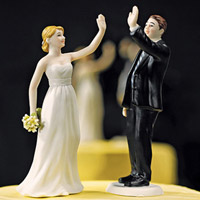 More than three months before the TV cameras start to roll and the announcers put on their headsets, rose parade floats are already competing for attention. Farmers Insurance Group kicked off their publicity campaign by announcing they’ll host a live wedding aboard their craft for “one lucky couple.” We wouldn’t call the Rose Parade particularly romantic (it’s too early in the morning, for one thing, and it’s the day after New Year’s Eve, precisely when we’re either nursing a hangover or making the sorry realization that our new year’s resolutions are going to fail—again—for another.) On the other hand, getting married during the Rose Parade would be slightly less risky than having some other all-expenses-paid ceremony a la reality TV: at least you can count on the flowers being perfect.

Interested in getting married on the float? Check out the Farmers Insurance Dream Wedding Facebook page for details.