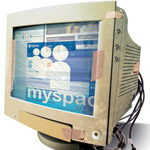 Perhaps you remember MySpace? Two years ago it was the kingpin of social networking, the first site for millions of people to create their own Web pages, pore over mindless blogs, listen to bootlegged music, post R-rated photos, and most of all connect with hundreds or sometimes thousands of other MySpacers. Companies felt obliged to set up pages, too. So did countless bands. Rupert Murdoch’s News Corp. purchased the parent company in July 2005 for $580 million (much to the chagrin of another media mogul, Sumner Redstone, who had also gone after the site). Later came a three-year $900 million advertising deal with Google—a transaction that at the time was unheard of in social media.

MySpace continues to bring in millions of visitors each month, but the numbers are trending downward. June marked the first time that more visitors were on Facebook—77 million to MySpace’s 68.4 million. Fewer visitors means less advertising, and the Google deal expires next year. Though still a relative sliver of News Corp.’s $30 billion business, MySpace was largely responsible for the media conglomerate’s $203 million loss covering the three months ending on June 30.

But never mind the numbers. What MySpace has really lost is its coolness, the main thing that got it going (a recent survey found six out of ten users visit less often). Last spring News Corp. fired cofounder Chris DeWolfe and brought in new management, including a former executive at archrival Facebook, to resurrect the division. First order of business: laying off 30 percent of the ballooning workforce and canceling a planned move from its Beverly Hills headquarters to the South Bay.

Cost cutting is always the easy part. Now comes figuring out how MySpace fits into an expanding social media world that is made up of Facebook, Twitter, LinkedIn, and thousands of smaller online communities. Everybody wants in. “You must focus on only a few things. You can’t do everything, even though you want to play catch-up,” says Jonathan Miller, the former head of AOL whom Murdoch hired last spring to handle News Corp.’s digital operations.

Oh, and there’s the matter of making money: how to persuade companies to place their ads alongside the assorted scribblings and videos of average folks. So far, users of social networking sites aren’t tuned into ads, which is why the click-through rate has been so low. “Television advertising is mass to mass,” says Chris Anderson, editor-in-chief of Wired magazine. “Coke ad against American Idol. OK, but what do you put against a cat video? What do you put next to your favorite soldering video?”

In talking to a bunch of experts in the social media world—smart, ambitious entrepreneurs who deal with those kinds of questions all the time—I kept hearing the same three letters: TBD. I’m not a big fan of “to be determined” strategies; they’re an unsettling throwback to the tech boom of the late 1990s, when other smart, ambitious entrepreneurs insisted that it was all right not to have a business model and to lose gobs of money because in due course profits would keep pace with concepts.

Facebook isn’t losing gobs of money—the company expects to be cash-flow positive sometime next year—but annual ad revenues reportedly run a paltry $230 million, which is less than half of what MySpace continues to bring in. (I say “reportedly” because none of these sites provides exact financials, and the numbers bounce around a lot.) Facebook chief executive Mark Zuckerberg has turned down several buyout offers, choosing instead to take the company public in the next few years. Waiting it out has been made easier by several hundred million dollars in venture capital dollars (not to mention the massive valuation it is receiving). Yet Facebook and other successful Web sites cannot keep relying on the kindness of deep-pocket investors. They have to become real, functioning businesses.

The guys who started MySpace couldn’t have anticipated any of this. Back in 2003, DeWolfe and cofounder Tom Anderson were with a Santa Monica Internet company called eUniverse (later renamed Intermix) when they had this wild idea: Why not construct a spiffier version of Friendster.com, which itself was a step above the typical online-dating service? Each MySpace user would be provided a page for a profile, pictures, blogging, and other odds and ends. Working out of a small office near LAX, DeWolfe and Anderson built the site on a shoestring budget, using two Dell computers and a single database (they chose not to start their own company because it would have meant losing promised payouts from eUniverse).

Their timing was impeccable, what with a sharp increase in the use of high-speed broadband. The higher speed greatly reduced the wait for uploading photos, graphics, and music. Among the earliest adopters were teenage girls eager to socialize and drawn to the possibilities of nonstop exchanges—for free. But MySpace launched with so little planning that it was bound to run into trouble. An early mistake was enabling users to build those ghastly wallpapered pages (think paisley on paisley). That badly overloaded the MySpace servers; technicians who should have been working on updated versions were too busy trying to keep the site going.

Some miscues were just dumb, such as letting people use phony identities that were hard to trace (e-mail addresses were never verified). Beyond understandable concerns about sexual predators, the anonymous users created a creepy atmosphere, not unlike what you would find in an adult bookstore. “In a place where ‘U are soooooooo hot!’ passes for wit, MySpace isn’t doing much to elevate the level of social discourse,” concluded PC World magazine several years ago in naming it the worst site on the Internet.

News Corp. quickly recognized that it had problems—that DeWolfe and Anderson were resistant to change (they even balked at a move from Santa Monica to Beverly Hills), and third-party programmers who developed widgets for MySpace were not given nearly the same financial opportunities as at Facebook. The place was practically held together with duct tape, and the limited system upgrading led to, among other problems, huge vulnerability to hacking. “It seemed as if they didn’t iterate their technology and features quickly enough,” says Jason Nazar, cofounder and chief executive of the L.A. Internet company Docstoc.com.

Facebook, meanwhile, was easier to use, had better features (especially the photo-sharing function), and discouraged fake identities. Where MySpace had a freewheeling, renegade quality, Facebook came across as accessible and friendly. Older people felt comfortable showing off pictures of their family vacations. “That’s the difference between a Los Angeles company and a Silicon Valley company,” Zuckerberg was once quoted as saying (Facebook is based in Palo Alto). “We built this to last, and these guys [at MySpace] don’t have a clue.”

Reid Hoffman, an early investor in Facebook, believes that social media is in its early stages and that users and companies are only getting their feet wet. But he knows from experience that the industry cannot amble on forever. Hoffman is founder and chief executive of LinkedIn, the social networking site that’s aimed at businesspeople and is among the few sites that is making a profit. It has a potential competitor, though, in The Wall Street Journal (owned by News Corp., too), which wants to replace its own fledgling social networking site, WSJ Community, with one called WSJ Connect. Insiders have dubbed it the “LinkedIn Killer.”

“When people ask me about the future, I say it’s sooner and stranger than you think,” Hoffman told me at a technology conference in Pasadena, pointing out that no one would have expected Twitter to be such a phenomenon 12 months ago. “The same way you can have millions of people creating new kinds of social media,” he said, “I think you’ll have interesting new ways of creating and participating in advertising. The question is how we figure it out.”

Actually, Hoffman might be creating an industry model at LinkedIn. Rather than relying solely on broadcast-type advertising from Fortune 500 companies, the site has been generating revenue through subscriptions charged for premium services (say, access to special features or information), paid job postings aimed at target audiences, and the licensing of its recruiting software to human resource departments. Not everything will work on each social networking site, but the point is to find multiple ways of selling the product. A music label, for instance, could give away a thousand DVDs to MySpace members on the bet that word of mouth might prove more valuable than a traditional ad.

Along with a revamped ad strategy, MySpace must forget about trying to appeal to everyone. It’s not going to happen. Better to concentrate on the people who have stayed with the site—generally younger, single, and more interested in music—and then build on that base by adding features like video games. Murdoch says the idea is to become more of an entertainment portal (it’s dropped the tag line “a place for friends”). Already the free streaming site MySpace Music has seen a huge spike in traffic and is beating out such competitors as MTV, Pandora, and Rhapsody. You can see where this is heading: MySpace, given up for dead only a few months ago, could become cool again. Whether it can become a moneymaker as well is the big TBD.