Home Education How Music, Dance, and a Mariachi Band Helped Buoy Spirits During the... 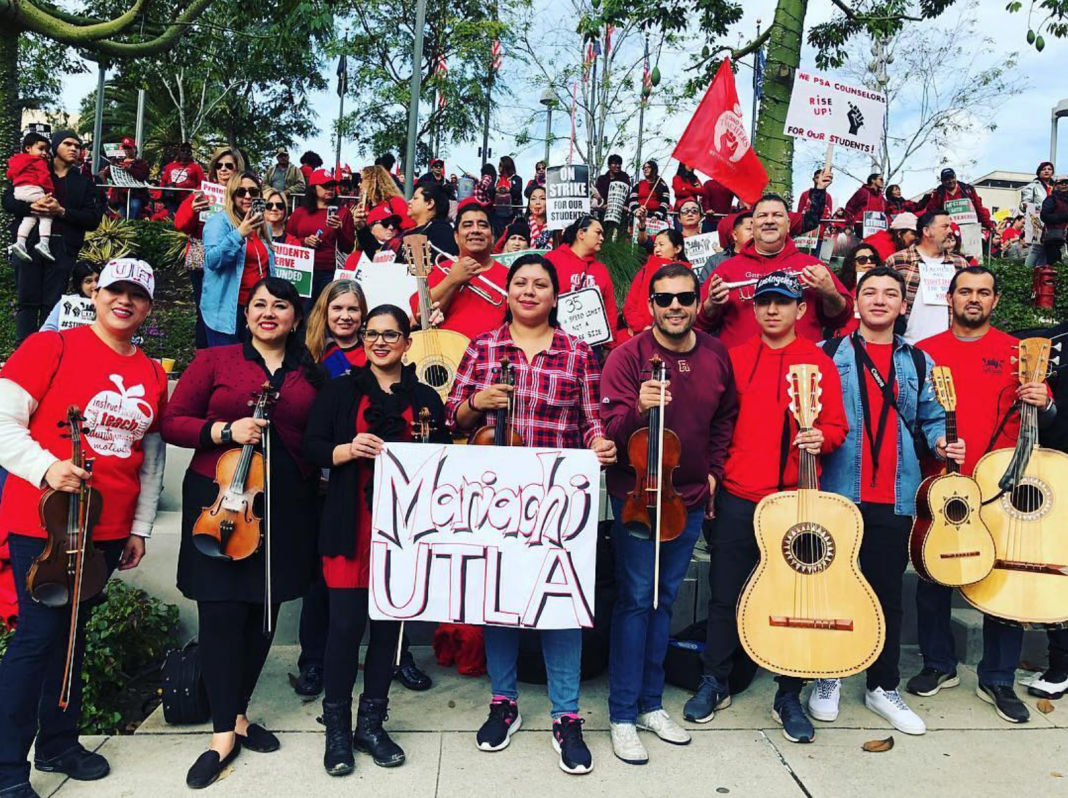 During the L.A. teachers strike, Leticia Garcia, a mariachi violinist and an educator at Belvedere Elementary, took it upon herself to organize a United Teachers Los Angeles mariachi band. “There was so much interest from all us to [help] pick up the morale on the picket lines and show support,” Garcia says. She contacted educators across L.A. who were also mariachi musicians to come together to make some music. Last Friday, during the union’s big Grand Park rally, the UTLA mariachi band came together to perform for colleagues, supporters, and the community.

“There’s a lot of significance to the [music], for example, ‘De Colores,’ that was performed during the Cesar Chavez movement,” Garcia says via email. “Mariachi has always been part of a lot of these powerful strikes.”

The band comprises music, special education, elementary, and high school teachers from across the district—from El Sereno to Northridge—and has over 20 names on its roster.

“We came together as a labor of love to support our fellow colleagues in this fight,” Garcia says. “Many of us are teaching in the communities where we grew up and know firsthand the importance of well-funded music programs.”

Students got in on the action last week, too. Aryana Fields, a fifth-grader at Playa del Rey Elementary School, performed “A Strike Song” in support of striking teachers. And at Delevan Drive Elementary in Eagle Rock, dozens of students stood on a second-story balcony and serenaded their rain-drenched teachers with “Count on Me” by Bruno Mars (you can watch the video here).

“Music has played an important role during the strike because it gives us an avenue to express ourselves positively and change the mood for [everyone],” says Guillermo Gonzalez, music teacher at Garfield High in East Los Angeles. “It has helped on the picket lines to make it [feel] more lively as well as to help us not think of our students who we miss and the impact of not getting paid while we are out.”

Gonzalez’s son, 14-year-old Esteban, accompanied his father on the picket lines from day one and was also a part of the mariachi band that UTLA formed. He plays the bass, also known as the guitarrón.

“Music has served the role of giving people hope and energy to keep them going through the strike,” the younger Gonzalez says over the phone. “Music has given people happiness throughout this strike and has shown that even though things were tough, there was still joy and hope to push on.”

Throughout the strike, more prominent (and even legendary) artists from the music world showed up to rallies, marches, and picket lines to stand and even perform in solidarity with L.A. teachers.

Last week, Steven Van Zandt, a founding member of Bruce Springsteen’s E Street Band, joined teachers at Hamilton High School. L.A.-based band Ozomatli, which has been around since 1995 and is known for its activism, also visited to show support. Tom Morello, former member of Rage Against the Machine, took the stage at last week’s Grand Park rally to perform, and told the crowd, “It’s an honor to be with you in the streets of Los Angeles today.”

During the strike, educators also got creative with their dance skills. Using the late Aretha Franklin’s “Respect” as the soundtrack to their #PublicEdDanceChallenge, UTLA members and supporters shared video on social media to encourage L.A. to learn the dance and show up on the picket lines.

And they weren’t just any ol’ dance moves, they meant something more. “Step one: Reach up and lower class sizes! Step two: Bring in the community, who’s with us? Step three: Roll it to the front, roll it to the back. Step four: Scoop up that billionaire reserve! Step five: Dust off the excuses, dust dust double dusts! Step six: Reach up and celebrate that just victory!”

After six days on the picket lines—through both rain and shine—UTLA reached a tentative agreement with the district yesterday. As both parties announced inside City Hall that a deal had been struck, UTLA members, the L.A. community, students, and supporters began to celebrate outside as Pete Rodriguez’s “I Like It Like That” blared through the speakers.