Home Disaster Barbecues, Weights, and Lots of Wine: Here’s What Angelenos Are Buying Up... 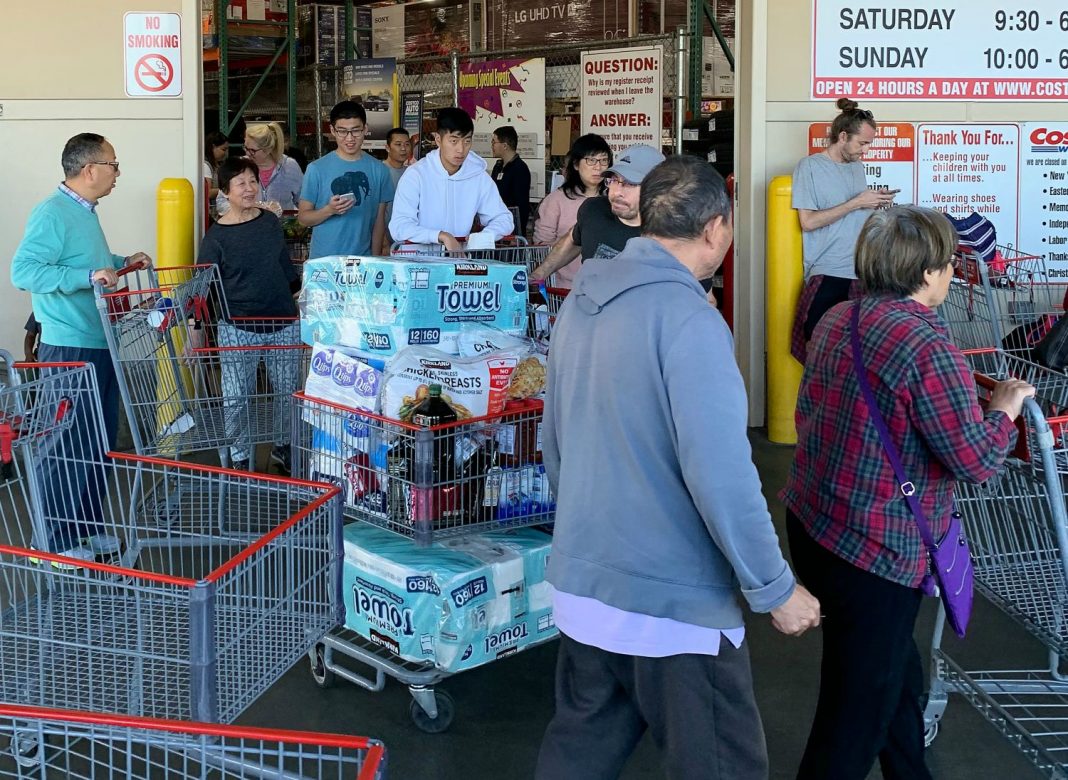 As the pandemic evolves, so too do our desires. In the beginning, we sought out rolls of toilet paper—a compulsion rooted in our longing for control over defecations, according to Freudian experts. Now, it seems, we’ve moved into less psychically fraught purchasing patterns. According to Walmart’s CEO, we’re currently in the “hair color” phase of panic buying. Sales of hair clippers and hair coloring products have, respectively, increased 166 percent and 23 percent year over year Nielsen estimates. We’re attempting DIY buzz cuts and Zoom haircutting lessons, to varying degrees of success, all in an attempt to tame the frizz atop our heads, if not the thoughts inside them.

But are we still “panic buying”? In Los Angeles, despite the apocalyptic photos of barren shelves, the urge to stockpile has lessened over the last few weeks as we’ve settled, however uncomfortably, into our new normal. At the Pavilions in West Hollywood, a customer service representative said that she’s seeing more “normal shopping” these days. At Food 4 Less in Hollywood, a checker said that customers seem to have calmed down. “People aren’t panicking like they were before; they’re just buying whatever we have on our shelves,” she said.

Still, shortages remain: a clerk at the CVS on Third and Fairfax reported that all isopropyl alcohol, Lysol, Clorox, tissues, thermometers, and antibacterial soap were being snatched up by customers as soon as new shipments arrived. Employees at the aforementioned Pavilions and a Walgreens in Mid-Wilshire told a similar story.

Gloves and masks were sold out at Koontz Hardware in West Hollywood, but other trends were more intriguing: the store’s barbecue sales were way up, as were sales of paint cans. “People definitely have a lot more time on their hands for home improvement projects,” an associate says. At Anawalt Lumber in Hollywood, the most popular items were plants, soil, and vegetable seeds, according to a cashier. “Customers seem interested in anything they can grow themselves,” she says.

So we’re perilously cutting our own hair and sprinkling vegetable seeds into little pots around our apartments. Sounds like we need a drink. At the Rite Aid on Fairfax and Sunset, a worker says that customers are snatching up Zinc, vitamin C, and “lots and lots of wine.” (Alcohol sales, as well as sales of cigarettes, have spiked nationwide since the coronavirus crisis, for fairly obvious reasons.) Wine is also on the menu at a number of markets that have opened inside restaurants around L.A., including at Kismet, Perch L.A., Sara’s Market, Gwen, and Tender Greens. At All Time in Los Feliz, a $1,500 “Doomsday Fuck It Pack” of wine includes 12 bottles of the “highest end, allocated cellar shit, for a happy end of days.”

When those last days come, at least we’ll all be shredded: most dumbbells were sold out at local Targets and Walmarts, as were ab rollers and many resistance bands and yoga mats. (Instead, Target recommended I buy a ukulele kit, complete with a DVD instruction video, to “take care of your mind, body and spirit.”)

As the crisis rolls on, headlines will likely announce new shortages as residents adjust to life without staples like ClassPass, Rudy’s, and Musso & Frank. It’ll be tempting to call these shortages a result of “panic buying,” but hoarding essential goods is a “totally normal and adaptive behavior,” according to Stephanie Preston, a behavioral neuroscientist at the University of Michigan. The act of stockpiling is well represented across the animal kingdom: squirrels hoard nuts, kangaroo rats hide seeds whenever it rains so they can dig ‘em up later, and a Clark’s nutcracker can hoard over 10,000 pine seeds every fall. It’s also what humans do when they’re anxious: in one study, subjects were more likely to take objects home with them when they were made to feel nervous.

“Suffering from hoarding disorder, stockpiling in a pandemic, or hiding nuts in the fall—all of these behaviors are motivated less by logic and more by a deeply felt drive to feel safer,” says Preston.

So take heart, and don’t beat yourself up too much for impulse purchasing a 36-pack of TP—or, you know, a ukulele.

Correction: A previous version of this article incorrectly stated that neuroscientist Stephanie Preston is associated with the World Economic Forum.