Two years ago this week, Los Angeles published its first piece on COVID—a 5,000 word investigative report by contributing writer Jason McGahan. It was one of the first major magazine articles—the first by a monthly—to raise the alarm about the brewing pandemic that would soon engulf the world.

When I first assigned the story in January of 2020, it was supposed to be a short column. At the time, COVID had started to ravage China, but the reports out of Wuhan seemed a million miles away. The virus had not yet caused a single casualty in the U.S. Donald Trump repeatedly assured Americans that the “China flu” was no cause for alarm.

But as McGahan pursued the story over the next few weeks, the epidemiologists and scientists he interviewed all warned that the writing was on the wall—in a global world, they said, it was only a matter of time before the pandemic washed up on American shores. And some of the closest shores to Wuhan happened to be in California cities like Santa Monica and San Francisco.

Over the next few months, the column morphed into a feature and then a cover. Jill Greenberg, a longtime photographer here, was enlisted to shoot it. Jason’s final draft arrived on deadline day at 15,000 words—10,000 more than we had space for. After a frantic all-hands marathon, we belatedly sent it to the printer at noon the next day and then crashed for the next 48 hours. When the magazine hit the stands on March 17th, 2020, more than a few readers denounced it as alarmist “fake news.” But that didn’t last long; indeed, the speed with which COVID completely uprooted the world took even us by surprise. Shortly before the story came out, on March 11, 2020, news broke that Tom Hanks and his wife had contracted the virus in Australia. A couple days later, on March 13, Trump declared a national emergency. A few days after that, the Los Angeles staff permanently vacated the Wilshire Boulevard offices that had housed the magazine for 15 years. By then the city was a ghost town.

I honestly hadn’t thought much about this issue until it resurfaced on social media this week—editing a monthly has a way of keeping you focused on the future rather than the past.  But reading the story again this weekend, I was struck by its prescience. To find out how the impending COVID pandemic might impact L.A., McGahan investigated the city’s response to a previous pandemic—the Spanish flu of 1918. It turns out history does repeat itself: the early panic and hoarding, the failing restaurants and shops and ball parks, the pitched battles over masks and lockdowns and schools, it all eerily foreshadowed everything we have lived through over the past two years.

Los Angeles has gone on to publish other timely, important covers—on COVID and homelessness, on schools and psychedelics—wait till you see this month’s Oscars expose! But this one will always have a special resonance for me; it’s the kind of sweeping, high-stakes story that I dreamed of when I first got into journalism.

The media business has weathered a growing array of pressures in recent years, remote offices, budget cuts, and partisan assaults from both the left and the right. Los Angeles has not been immune from all that. But I am proud—and grateful— that we were able to document, in a very L.A. way, one of the most momentous stories of our era. 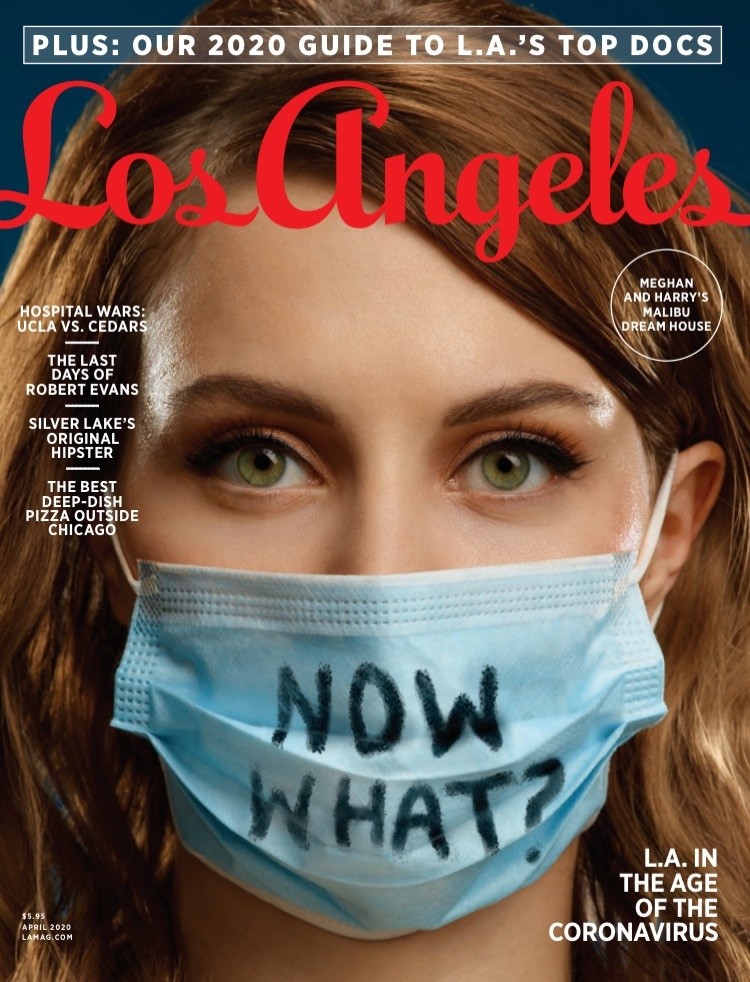