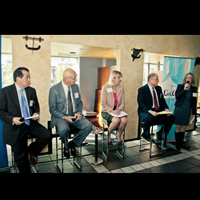 Yes, it’s the economy. So what can Los Angeles business owners do to grow their companies and help speed up California’s recovery?

The discussion, titled “From Crisis to Normal” and sponsored by Pepperdine University, touched on unemployment, education, even the mayoral race. Despite differences in perspective—Barragan expressed frustration with local lenders’ unwillingness to finance small business loans despite encouragement from the federal government, one challenge Ratkovich is unlikely to have faced from the helm of one of L.A.’s largest development groups—the panel agreed there’s no longer such a thing as business as usual. “There has been a permanent change in the how we do business,” said Barragan.

Without the financing they need to create jobs, companies are asking employees to do more with less to stay competitive, a solution Livingstone argued isn’t sustainable long term.

When the discussion turned to the bigger picture, the panelists described an economic landscape that is changing with the times. While single-home construction has slowed and thousands of jobs in the financial services industry have been lost, Ratkovich cited growth in the entertainment, media, and technology sectors.