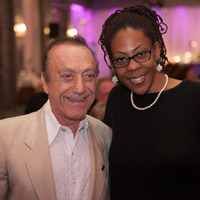 It’s not every day that Judge Lance Ito and 92.3 FM DJ Art Laboe break bread, but that’s what happened when Los Angeles magazine hosted a luncheon at the Intercontinental Hotel yesterday sponsored by Lexus to recognize the many diverse voices featured in our April “Race in L.A.” issue. Over plates of crab salad and red snapper, In-Ha Cho, a Korean veteran who was shot while defending local businesses from looters during the riots in 1992, Rhonda Mitchell, a former 911 operator who fielded calls during that time, Aurea Montes-Rodriguez, a community organizer whose life work was informed by the riots, and Jonathan Lopez and Sophia Lykke, two of the twenty-year-olds of mixed race profiled in our issue, shared stories and shook hands with community leaders like Korean Churches for Community Development founder Hyepin Im, who had stopped by to discuss what race means in L.A. now. “We’ve gotten some calls from readers who don’t see themselves reflected in the covers,” said Los Angeles magazine editor-in-chief Mary Melton, pointing to blowups of Los Angeles magazine’s three April covers after a kind introduction by Walton Isaacson agency co-founder Aaron Walton. “But we’ve had a huge amount of positive feedback as well.” She went on to read from a letter that had just arrived applauding the controversial package and calling it every Angeleno’s responsibility to “create progress in the ashes of the past.” We couldn’t agree more.

Click here to see a slide show of photos from the event.