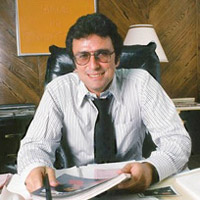 It is with sorrow that Los Angeles magazine reports the passing of our co-founder, Geoff Miller, on April 17 after a lengthy illness. Geoff was 74. Geoff and his business partner David Brown launched this publication in 1960. This was five years before LACMA opened on Wilshire Boulevard and the Watts riots occurred, when L.A. was still regarded by the outside world—and by many of those who lived here—more as an airy self-indulgent lifestyle or a glittering movie capital than a major city with ambitious aspirations, profound struggles, and an artistic and civic life that spread far beyond studio gates. Looking back, how much sense it makes that Geoff launched the first city magazine in America, inventing the genre. Los Angeles needed the civic cohesion he brought between two glossy covers like no other city did, and we are greatly indebted to his vision. He worked at the magazine for 34 years, leaving as publisher in 1994. Look for a tribute to Geoff in our June issue. Go here for a fascinating history of Los Angeles that Geoff wrote for the magazine in 2000.