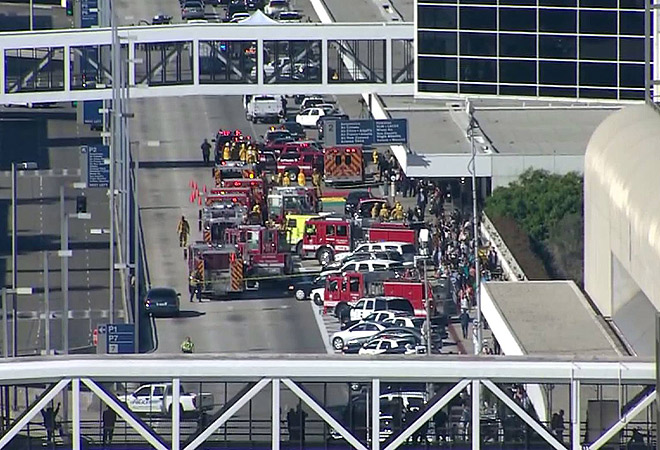 Around 9:20 this morning, a gunman carrying a high-powered rifle opened fire in Terminal 3 of Los Angeles International Airport. AirTran, Alaska, Horizon, JetBlue, V Australia, and Virgin America fly out of the terminal.

According to a variety of news outlets, the scene was nothing short of chaotic: terrified passengers flooded the tarmac while others went running for emergency exits. Passenger Vernon Cardenas of West Hollywood, who was waiting to board a Virgin America flight to Philadelphia, told the Los Angeles Times, “We’re at the end of the terminal, the last gate of the terminal, so there’s nowhere to run. People were diving, hiding under chairs. All of a sudden you hear a couple pops, maybe three. But it was in the distance.”

Airport police exchanged gunfire with a suspect, who was taken into custody. Los Angeles World Airports Police Department Chief Patrick Gannon told the press during a live conference this morning that there seemed to be a single shooter, though an investigation is pending. LAPD anti-terrorism officers were on site, but do not believe the incident was connected to any sort of terrorist organization at this time.

Acting LAFD chief James Featherstone confirmed seven injuries and said six patients have been transported to area hospitals. An FBI representative said the public should not expect information about the victims to be released today.

#LAXShooting. one shooter-injuried- in custody. 7 were injuried, 6 of the 7 were transported to hospital.

Officials suggest passengers scheduled to fly out of LAX today consult their airline for updated flight information (@LAX_official is also tweeting updates), but mayor Eric Garcetti has asked people—including travellers—to stay away from the airport until further notice.

In addition to the information above, some details being reported, especially about the suspect, have not yet been confirmed. This morning, the Times reported the shooter was a TSA agent at LAX. They now have information from a federal law enforcement official that the gunman was in fact a ticketed passenger, and not a TSA agent. The newspaper is also reporting a TSA agent who was shot has died, and that the gunman is now dead.

UPDATE, 1:48 p.m.: Multiple news outlets have identified the alleged shooter: “We know that the shooter was this 23-year-old American citizen, a resident of the L.A. area, Paul Ciancia,” Congresswoman Loretta Sanchez said in an interview with CNN’s “The Lead with Jake Tapper.”

UPDATE, 5:38 p.m.: Multiple news outlets have reported the discovery of an “anti-government” note found next to alleged shooter Paul Ciancia. The note indicated that he wanted to “kill TSA” employees and “pigs.”

UPDATE, 11/3: The TSA agent killed in Friday’s rampage has been identified as 39-year-old Gerardo Hernandez. He was the first Transportation Security Administration agent killed in the line of duty. Authorities have confirmed that at least two other TSA agents and one civilian were also injured in the line of fire. A murder charge was filed against the alleged shooter, who remains unconscious in a local hospital.

How One Ukrainian Refugee Family Landed in Los Angeles