Home Food & Drink From Aldi to Vons, How Grocery Stores Are Our Connection to L.A.—and... 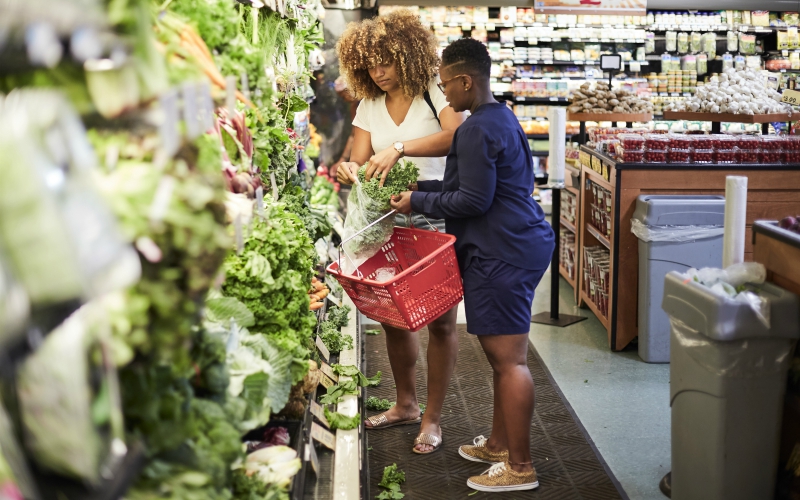 We know we’re in the boonies up here. I’ve met life-long Angelenos—Westsiders, mostly, as charmingly foggy as Oxford dons about anything east of La Cienega that isn’t DTLA—who aren’t totally sure where Altadena is. Cultivating our inner Paiute, we’ve learned to be stoic about the fact that virtually every eatery listed in TripAdvisor’s top “Altadena” restaurants is in Pasadena. All the same, it hurt when we lost our only Ralphs, which first opened its doors on upper Lake Avenue as a Market Basket when Dwight D. Eisenhower was president. I still miss Angela, my rowdily opinionated favorite among its checkout clerks. There were times when our conversations were the jolliest ones of my day.

The newbie whose advent doomed our modest Ralphs only made the bereavement crueler. The “Closing Soon” banners went up the moment construction ended on a bunker-like structure the color of Martian baby poop next to our old supermarket’s parking lot. What could it be, we wondered: the set for a sprightly new Netflix comedy about a black-ops CIA detention site, maybe? However well disguised, was this glamour at last?

Fat chance. We got an Aldi—not even a Trader Joe’s, which we could have used. Altadena was stuck instead with TJ’s German sibling, whose antiseptic mimicries of the fun side of East Berlin in springtime started popping up in Southern California only in 2016.

Lots of my friends who live elsewhere say they like the chain, and perhaps the decor’s simulation of a waterless indoor swimming pool where stranded swimmers dog-paddle in search of off-brand puppy food just isn’t for me. But I’ve never met anyone in the neighborhood who likes our Aldi.

After five or six visits, I gave up. It got too depressing to stock my larder with those unconvincing fake brand names, from Burman’s (condiments) and Chef’s Cupboard (soup) to Barissimo (coffee). I mourned how much savvier Aldi’s sister company is about peddling its wares, since labeling everything “Trader Joe’s” imparts a buccaneering brio to one’s freezer. But the TJ’s nearest to me is in Pasadena. So are the nearest Ralphs—where I occasionally spot employees transferred from our upper Lake Avenue frolics, as Tom Petty’s “Refugee” plays on my mental soundtrack—and the nearest Vons. While it’s nothing new for me to feel like a man without a country, losing my Ralphs turned me, in L.A. terms, into something arguably more traumatized. It turned me into a man without a supermarket.

This isn’t only a question of diminished convenience, understand. It’s a question of suddenly incomplete civic identity—a nagging gap in one’s everyday mental equilibrium. Where we shop for groceries is more important than we often realize in helping us feel connected to a place.

Maybe it’s different for native Angelenos. But I’m on my second incarnation as an adoptive one, with “roots” dating back to a long stint in Hollywood and Echo Park decades ago that led to a marriage to a local gal whose family kept us coming back on visits in the intervening years. In a city as defined as this one by chronic transients like me, anything that provides a facsimile of belonging is a vital antidote to L.A.’s mania for flux. As investigation gives way to familiarity and then familiarity gives way to nonchalant expertise, mastering a new neighborhood’s supermarket options is reassuring proof that we’re inhabitants, not sojourners.

One reason for my instant allergy to Aldi was that I didn’t get the impression they especially wanted me there. Or anyone else, really, turning native Altadenans and this Hollywood and Echo Park alum alike into displaced persons in our own neighborhood. Aldi did suit my erratic freelancer budget, and it was actually closer than my cherished Ralphs had been. Maybe only 60 feet closer, but you never know when gas prices will go up. So I went during opening week and tried not to get cranky about the locked shopping carts freed only by a 25-cent deposit, though leaving shopping carts helter-skelter all over a parking lot suddenly seemed like a God-given American right, and the refusal to provide shopping baskets for those of us whose needs are few and hastily met struck me as carrying forced compliance too far. Then I stepped inside and wondered what I—what poor Altadena—had done to deserve this Teutonic purgatory.

Maybe it was an illusion, but I felt wanted at Ralphs. (Bless you, Angela.) Albeit more equivocally, I felt wanted at Vons, at least until the one north of the 134 on Fair Oaks closed, too. Both chains were familiar to me from my previous L.A. life, which helped. But both—Ralphs somewhat more cheerfully, for no reason I’ve managed to pin down—also project a certain equanimity about letting the neighborhood’s clientele define each store’s character rather than the other way around. As for Food 4 Less, the “choice” of the choiceless and my own stopgap for a while, it announces the bleak nature of its community spirit in its forthright name. That’s why your dejection is offset by a sense that there’s a certain gallantry in shared candor.

Once I was trying on Food 4 Less for size and schlepping to the Pasadena Ralphs only for the cats’ mandatory Fancy Feast, my understanding of how uniquely evocative supermarkets are in L.A.’s cultural sociology got more acute in a hurry. It’s not just that Angelenos’ range of options is both more varied and more unabashedly stratified than most of the country’s, turning the logo on our grocery bags into a social signifier outdone only by the car we stick them in. It’s also the way the activity can sometimes feel like a reminder that we live in Los Angeles and nowhere else. In no other context is our particular bubble of the city on similar display in the public arena.

Since supermarkets  prosper by providing an ultra-Californian contradiction in terms—flatteringly customized herd-think—it’s tempting to guess the concept was invented here. It wasn’t, though. We owe the blueprint for the modern supermarket to Clarence Saunders’s Piggly Wiggly, launched back in 1916 in Memphis. But L.A.’s sheer sprawl and unprecedented confusion of urban and suburban lifestyles definitely made the idea catch on fast. Ralphs and Vons both expanded from their original solo downtown locations to local and then regional chains as early as the 1920s, making them indigenous in a way that Whole Foods and Albertsons—let alone Aldi—are not. It isn’t totally inappropriate that a venerable Vons stands opposite the site of the long-gone Babylon set for D.W. Griffith’s Intolerance, also from 1916. In their different ways, both represent the city’s century-old affinity for novelty.

So, of course, does Pasadena-born Trader Joe’s, whose eventual decision to go bad and nationwide was my education in the limits of what’s exportable about its character. In Virginia, where I once saw something like 100 expat Californians lined up for a TJ’s opening as if it were a rocket ship carrying them back to L.A., you can get the same house-brand foodstuffs. But you can’t buy Vodka of the Gods, which has always exemplified Trader Joe’s rash streak for me. The chain’s most distinctively Angeleno innovation was to target a sensibility as much as a budget, or rather to concoct a bogus one that added charm and cachet to the off-brand bargain hunting that TJ’s increasingly dispenses with as an inducement to shop there.

At the upscale end of the L.A. food decathlon, Whole Foods delivers a much more posh variation on grocery shopping as an expression of identity. Its genius is to convert its customers’ relative affluence, which is a given, into evidence of superior concern—concern for the planet, for one’s kiddies, for beleaguered liberal civilization. However, since the company’s acquisition by Amazon last year, Whole Foods’ lurking snob appeal no longer seems all that exclusive. This probably disheartens snobs with nowhere else to go, but it strikes me as attractive.

These days, only Bristol Farms provides a full-on immersion in a pampered world bereft of hoi polloi. (By comparison, your average, placid Whole Foods looks like a breeding ground for a vicious mob out to send Marie Antoinette to the guillotine.) Yet one minor reason I regret my marriage’s demise is that my former mother-in-law’s address let me pretend Bristol Farms was, of all things, convenient—hardly what it’s renowned for. Encountering complacency that unrepentant was always a peculiar thrill, guaranteed to tickle my inner imp of the perverse.

In my life—or its Angeleno phases, anyway—I’ve loved them all. Yes, even snooty Bristol Farms. A trip there may cost as much as a weekend at Disneyland, but it’s got a similar appeal. Old and new, my supermarkets are at once an invaluable part of my personal map of L.A. and Proustian landmarks of my yesterdays here. As you might be glad to learn, I’m no longer lacking one of my own, and it’s an Altadenan bachelor’s paradise of frozen pupusas, hummus, tinned liverwurst, and inexpensive wine. How on earth did I last here so long before I discovered Super King?

RELATED: Why Do People Love Trader Joe’s So Much?

This Vegan Meat Was Poised to Be the Next Big Thing. Then the Pandemic Struck