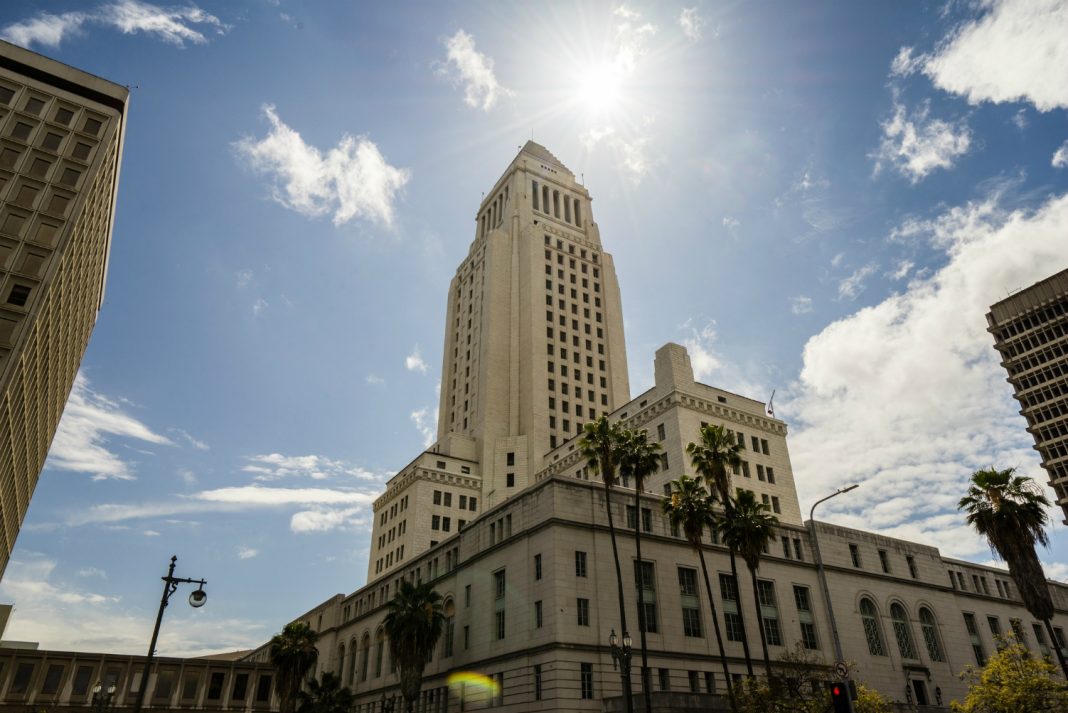 On April 26, 1928, about 32,000 Angelenos, 200 mayors, 150 floats, and 34 bands took to the streets of downtown L.A. to mark the opening of the new City Hall. Back then, the structure was L.A.’s tallest, a superlative it held on to until a 150-foot height limit was repealed in 1957. While its 452-foot tower is dwarfed by modern high-rises, the structure still looms large in municipal life, providing a home base for civic leaders and a place for gatherings. Here are the ins and outs of the landmark.

Often referred to as L.A.’s “front lawn,” Grand Park extends four blocks north from City Hall’s Spring Street entrance. Aside from a year-round lineup of block parties and festivals, its proximity to the mayor’s lair has also made it a place for protests and political gatherings (such as this year’s Women’s March and the March for Our Lives).

A free observation deck is open to visitors during business hours (8 a.m. to 5 p.m.). Head to the mayoral portrait gallery on the 26th floor, where you’ll peruse paintings of the city’s former head honchos before ascending a staircase to the grandiose Mayor Tom Bradley Room. From there, you can access an open-air deck that offers sweeping panoramas of downtown.

The tower was badly cracked by the Sylmar Earthquake in 1971. Some two decades later, the city funded a $299 million renovation and seismic upgrade of the structure. Workers excavated 20,000 cubic yards of dirt from below it to insert 526 seismic base isolators and 52 shock-absorbing dampers, allowing the building to withstand a temblor up to magnitude 8.2.

A white airplane beacon atop City Hall dedicated to aviator Charles Lindbergh operated nightly in the building’s earliest days but, ironically, proved to be a distraction to pilots. City officials changed it to red and eventually took it down after World War II, only to reinstall the original version in the ’90s. Today it shines only on special occasions.

RELATED: This Was L.A.’s City Hall for 39 Years