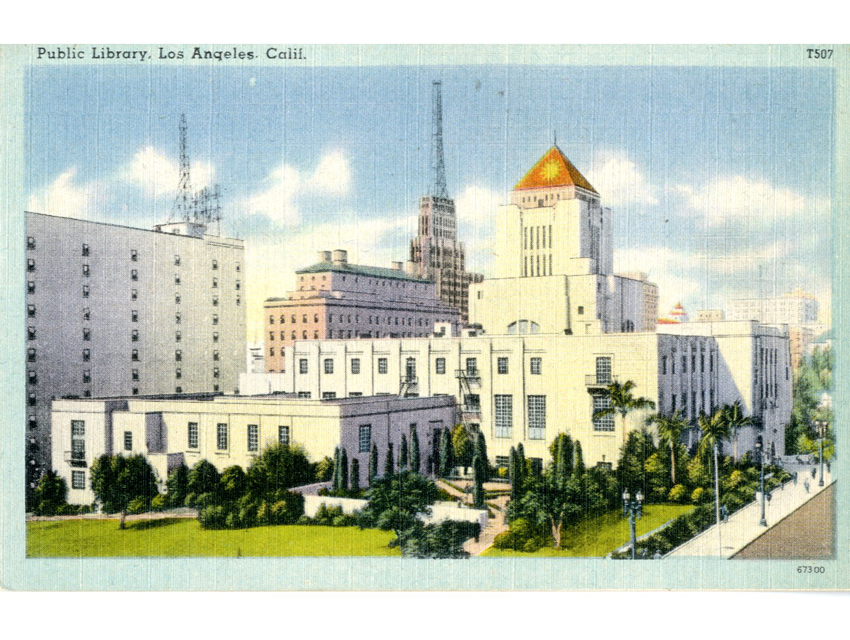 Today is the 90th birthday of dear Central Library, a place that has launched a million hopes and dreams for Angelenos in its nine decades. Hardly anywhere else in the city can own the cultural credentials of this stately institution. While the history of Central is often measured only by the building and its architecture, I am compelled to remind everyone I can that Central Library has always been about books, research, ideas, liberating knowledge, and—most of all—the people on both sides of the reference desks; my own intimate relationship with the old beauty goes way beyond bricks and mortar. That is not to say that the building itself is not impressive and awe-inspiring, but others have already done fine jobs describing that (see Steven Gee’s new book, Los Angeles Central Library: A History of Its Art and Architecture).

Los Angeles has always been a big reading town (despite false stereotypes from points east) and a place filled with lovers of libraries. As a matter of fact, two of the largest library systems in the country are the L.A. Public and L.A. County Libraries. The quest for a permanent home for the city’s library collection took shape in 1921, when the Board of Library Commissioners brought a proposition before the City Council for a $2.5 million bond to build Central and some branches. The bond passed and the city was offered land on Normal Hill on the site of the old Normal School. Bertram Goodhue was chosen as the architect, and—once 44 construction contracts were signed—groundbreaking took place in November of 1924.

On July 6, 1926 the public was first allowed into the gorgeous new facility, and the place was formally dedicated on July 15. Five hundred dignitaries and library sorts gathered in the beautiful rotunda. Everything was coming up roses and the future looked bright, but unfortunately, Black Tuesday was just three years off. Budgets were about to become permanently tight.

Since opening day in 1926, Central Library has been a place of opportunity for the common man and woman, with plenty of eccentric patrons and librarians. City librarian Mary Foy—who purportedly packed a pistol in her purse—organized the book collection according to the Dewey Decimal System; the hard-nosed Tessa Kelso increased holdings sevenfold between puffs on her hand-rolled cigs; and the colorful Charles Fletcher Lummis branded books to cut down on theft and collected Californiana—when he wasn’t womanizing, that is.

Writers, movie stars, studio wannabees, artists, musicians, genealogists, and students have used the collection on an almost daily basis for the past 90 years. In my time at the old dear, I have met actors like Denzel Washington, Jody Foster, Diane Keaton, Peter Falk, and Jeremy Brett, as well as playwright August Wilson, former mayor Tom Bradley, former secretary of state Henry Kissinger, and George McGovern, the democratic candidate who ran against Nixon in 1972. I have been asked via hand-written letter to introduce the Alphabet Bomber to the Unabomber. A young Croatian man once swore he would kiss me if I could get him a Lakers jersey back in the Showtime era, and a woman told me with steady eye contact that she had been on the Titanic when it sank but had turned herself into a seal and swam from Greenland to San Pedro. Central Library continues to draw all types to its trove of knowledge in the center of downtown L.A.