Home Essays If Ever There Were a City to Finesse a Catastrophe, It’s Los... 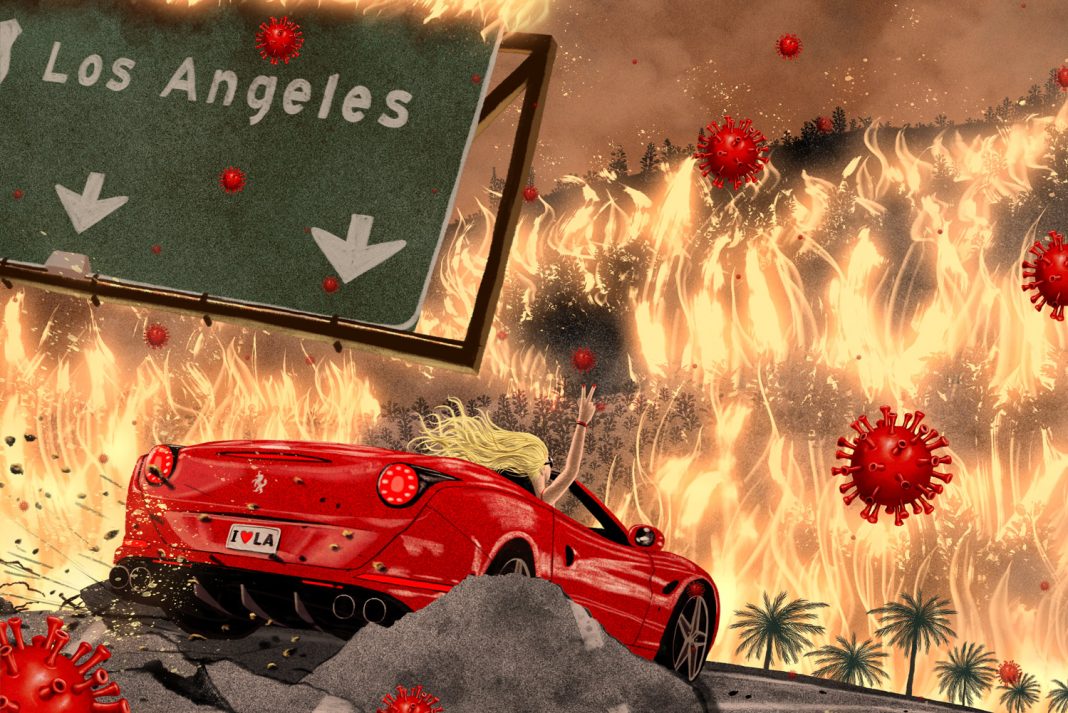 In Los Angeles, apocalypse is regular but not normal. This city is a gaudily advertised paradise with a deferred cost paid on layaway. There is no such thing as a free lunch at the Ivy. To live here is to accept the tacit risk of destruction, whether environmental, professional, or via a Seth Rogen vehicle. It’s a place where the end of the world means many different things to many different people: from final-judgment evangelicals parading down Hollywood Boulevard to cocooned Westsiders grieving over the death of Nate ’n Al’s. Over the last 30 years alone, it has withstood cataclysmic earthquakes, hellish infernos, biblical floods, tyrannical drought, damaging mudslides, and a riot in which thousands of businesses were looted and torched. While the cliché is that the city’s deepest image is of itself burning, its deepest fear is forced evacuation.

The novel coronavirus poses a different existential threat—an invisible pathogen versus an unsubtle act of God of furious vengeance. With the potential to inflict heavy fatalities and permanent economic ruin, it’s a plague straight out of Cecil B. De Mille or maybe Magnolia. But a city’s strength can often double as its weakness. The infamously short memory of Los Angeles allows it to reimagine and rehabilitate itself over and over, but that historical outlook can also lead to collective amnesia.

There are those here with generational roots, but more commonly this city is a home to transients—a municipal ATM where people attempt to get their cash and bounce. If you’ve lived in L.A. long enough, you remember the dislocating panic of the ’94 earthquake, in which 57 people died, 8,700 were injured, and the cost in modern dollars was somewhere between $22 billion and $76 billion. It was named after the Valley neighborhood with the most severe destruction—Northridge—but almost every Angeleno knew someone whose home, school, or workplace was damaged. The ’92 riots resulted in 63 deaths, 2,383 injuries, and more than $1 billion in property dam age. Entire neighborhoods and livelihoods turned to ashes, and burned-out strip malls laid in rubble for years. Narrow remembrances focus on the impact to South Central and Koreatown, but Frederick’s of Hollywood was pillaged, and riot fears forced the Beverly Center to shut down. Conversely the incident kickstarted a still-ongoing attempts to reform the LAPD and influenced Dr. Dre’s The Chronic and Sublime’s “April 29, 1992.” Out of chaos occasional silver linings materialize (unless you hate Sublime, which means you’re not really from L.A.).

As the danger of climate  change becomes an inescapable and unwelcome companion, we’ve become inured to the acrid smoke and lamb’s blood sunsets that accompany fire season every fall. Real estate purchases—for the lucky few who can afford the astronomical prices—are now hedged against which canyon neighborhood might eventually be incinerated by flames. This isn’t a new reality, merely an exaggerated one. The region has regularly burned since it was home to the Tongva tribe. It’s a community sitting atop the wrathful San Andreas Fault—which inspired the subtitle of a fabled Grand Theft Auto video game, a series whose virtual fun is partly rooted in carjacking, another damned L.A. innovation.

Southern California is an axis mundi for destruction. There have been catastrophic floods since long before the Los Angeles River was bound in concrete. Lesser known are the tornadoes of 1918, 1930, and 1966 that mimicked the fake Oz one created on the MGM soundstage in Culver City. The Academy Awards are held at the Hollywood and Highland shopping mall, a place architecturally modeled after the fall of Babylon in D.W. Griffith’s 1916 film, Intolerance. This isn’t even our first plague. The Spanish flu killed more than 2,700 Angelenos between 1918 and 1919; the 1924 pneumonic plague outbreak is less remembered: two terrifying weeks that resulted in 30 deaths (rats not included). Back when FDR was president, the famed evangelical Aimee Semple McPherson foretold the looming apocalypse from the Angelus Temple in Echo Park.

There is an entire canon of L.A.-based end-of-days porn. The Day of the Locust concludes with a Hollywood Boulevard riot predicted by a fictional painting called “The Burning of Los Angeles.” In Red Wind, Raymond Chandler wrote about the “hot dry Santa Anas that make your nerves jump and your skin itch … [where] meek little wives feel the edge of the carving knife and study their husbands’ necks.” The Omega Man presents Charlton Heston as a pandemic survivor killing vampirelike members of the Family and nearly getting burned at the stake inside Dodger Stadium. Earthquake features the Mulholland Dam bursting and deluging the city. The Day After Tomorrow imagines a twister turning the 405 into a charnel house of shrapnel and flying cars. In the alien-invasion tale Independence Day, the destruction of New York is played for pathos; in L.A. it is served up as parody. Last year’s Once Upon a Time in Hollywood delivers an alternate history of the Manson killings, which in real life caused an informal quarantine as residents sealed themselves behind locked doors. The dystopian vision of Blade Runner, set in 2019, was only a year off.

It’s only logical that today’s crisis would tap an atavistic nerve—although our fear of evacuation has morphed into doomsday anxiety about opening the door for the Postmates delivery guy. The mayor has warned of mounting body counts and of hospitals, short on ventilators and other crucial supplies, being overrun with patients on death’s door. But at press time, L.A. has been spared the worst ravages of New York. I’m no epidemiologist, but common sense suggests that the strict lockdown, boosted by Angelenos’ tendency to socially distance ourselves in bubbles of glass, stucco, and steel, might become a saving grace. L.A.’s lack of density and its residents’ aversion to mass transit create fewer natural vectors for transmission. The frequently maligned lack of seasons and tedious seven-days-a-week sunshine could ultimately blunt the force of the virus, which has hit harder in colder climates.

That’s not to diminish the inescapable despair spreading into every pocket of the city. It’s rare that a tragedy so thoroughly affects everyone, from the homeless to the ultrawealthy (save for David Geffen, he of the “Let them eat cake” yachting Instagram). It augurs a potentially brutal cultural holocaust for independent bookstores and record shops, revival movie theaters, family restaurants, grimy dive bars, sweatbox music clubs, and taco trucks. There’s a tangible threat that a looming recession will create a void filled by corporate chains, REITs, and hedge funds. Avoiding a Los Angeles that looks like midtown Manhattan—filled with nothing but Chopts, Chase Banks, and CVSes—will require tremendous resources and imagination from not just the residents but from local, state, and federal bureaucrats.

The hope, however naive, is that this catastrophe reawakens a communal spirit and imperative to preserve the landmarks, large and small, of the city. Amid the wave of depressing GoFundMe posts is an underlying reminder of our need for connectivity. Acts of casual heroism have been ubiquitous: from first responders and hospital staff to grocery workers to random Instagram acquaintances volunteering to deliver supplies to the elderly.

It’s possible that the worst threat of the virus soon will have receded. The best-case scenario is that the conspiracy-minded believe that the statistical models were bunk, and it was all a fear-mongering ruse. Either way, our city will never be the same, but it never stays the same for long anyway. A few years from now, we might remember this as a foggy dream, another bad apocalyptic movie. Perhaps by then the next big thing will be dominating our days, which, of course, would be quintessentially L.A., too—a city forever forgetting its past.