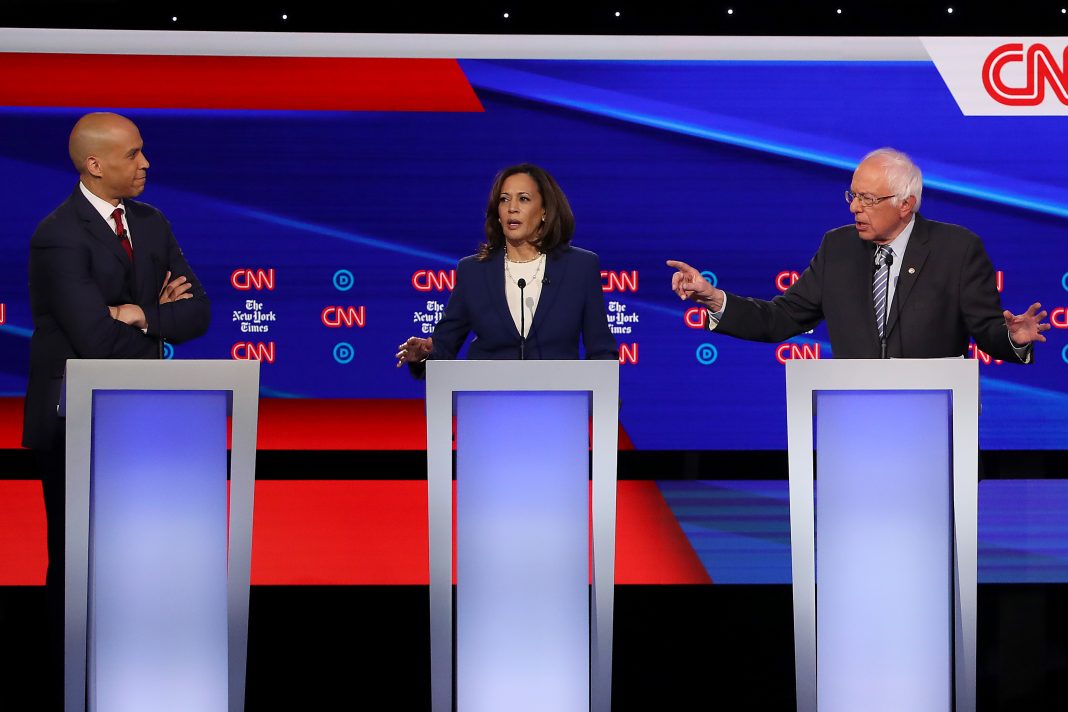 Senator Elizabeth Warren’s standing as the new frontrunner in the Democratic presidential nomination was bolstered last night when her rivals attacked her nearly as much as they did Donald Trump.

While all the contenders agreed that Trump is the most corrupt president ever, what they really seemed to delight in was tearing into the Massachusetts Senator.

Kamala Harris, who’s made it her mission to see to it that Twitter suspend Trump’s account, called out Warren for “not agreeing” with her on the finer points of the platform’s responsibility, saying, “I would urge you to join me because here we have Donald Trump, who has 65 million Twitter followers and is using that platform as the president of the United States to openly intimidate witnesses, to threaten witnesses, to obstruct justice.”

Warren clapped back, replying, “I don’t just want to push Donald Trump off Twitter. I want to push him out of the White House, that’s our job.” (Earlier on Tuesday, Twitter published a blog post explaining its policy and declining to suspend the President.)

Minnesota Senator Amy Klobuchar got the ball rolling even earlier when Warren wouldn’t say that she’d have to raise taxes on the middle class to pay for her healthcare plan, telling Warren, “At least Bernie’s being honest here and saying how he’s going to pay for this and that taxes will go up […] and I think we owe it to the American people to tell them where we’re going to send the invoice.”

Warren also didn’t demure. When Biden pointed out that he’d gotten her votes in the Senate to help her found the Consumer Financial Protection Bureau, Warren elicited groans from the audience when she ignored him and gave thanks to Barak Obama.

Biden himself stumbled when he struggled to explain what his son, Hunter, was doing on the board of a Ukrainian energy company while he was Vice President, saying he did “nothing wrong” just hours after Hunter admitted it might not have been the wisest decision he ever made.

Beto O’Rourke, meanwhile, called Warren’s proposed wealth tax “punitive” and implied that she wasn’t being entirely honest about her overall tax plan, but when the question turned to his plan get assault rifles off the street with mandatory buybacks, he couldn’t quite explain himself, either.

He stepped in it further when he challenged Mayor Pete Buttigieg’s “political courage” for failing to back his gun control scheme.

Of the 12 candidates to take the stage, only New Jersey Senator Cory Booker called for an end to the madness of democrats ripping one another to pieces, declaring, “I’m having déjà vu all over again, first of all, because I saw this play in 2016’s election.”

Referring to early questions about Hunter Biden, Booker said, “That was so offensive,” adding, “The only person sitting at home who was enjoying that was Donald Trump, seeing that we’re distracting from his malfeasance and the selling out of his office.”

RELATED: After a Stop at the Abbey, Kamala Harris Promises an LGBTQ Advocate in the White House