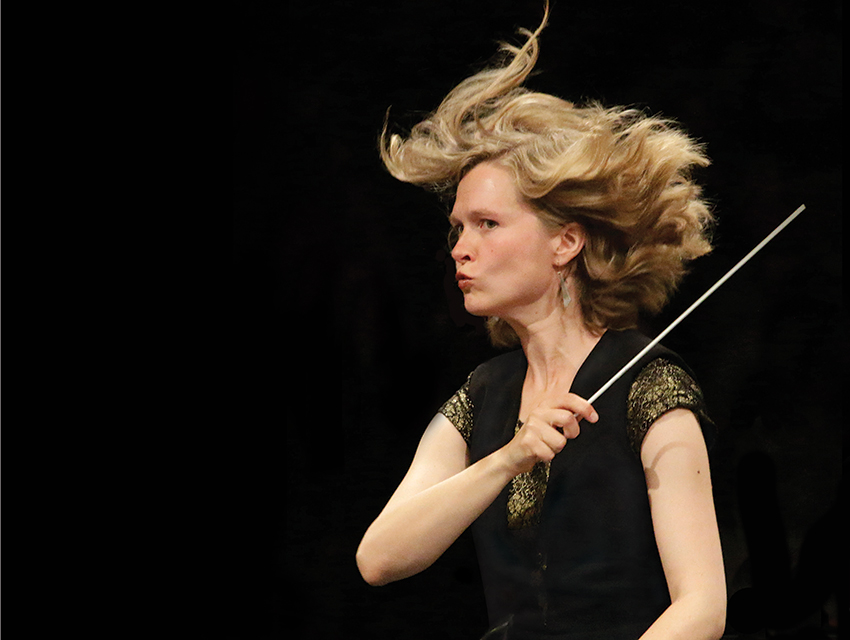 Before beginning  a performance, many conductors pause, baton raised, for a collective anticipatory moment of silence. Not Mirga Gražinyté-Tyla. From the second the 30-year-old associate conductor of the Los Angeles Philharmonic strides briskly onstage in low patent leather heels, she exudes a sense of momentum. In an instant she is in motion, arms aloft, her torso twisting as she explodes into the downbeat of Tchaikovsky’s Symphony no. 4. After the powerful brass introduction abruptly ends, she gently coaxes the woodwinds and strings along with her left hand—deftly shaping the ensemble’s sound while the measures pass by in perfect linear order.

When asked what she thinks about before kicking off a performance, she says it’s “a bit like looking forward to a birthday celebration—knowing that there is going to be a beautiful cake with a certain amount of candles.” In her lilting Lithuanian accent, she continues, “You know certain things—how it will happen and what it will bring you—but you are also excited because you don’t know many things.”

Mirga, as she is known—at least in part because her surname doesn’t exactly roll off the tongues of her American fans—is a relatively new addition to the L.A. Phil’s arsenal of young talent, but she’s already been noticed. Appointed assistant conductor in 2014 and promoted to associate at the start of the 2016-17 season, Mirga often fills in for musical director Gustavo Dudamel when he’s indisposed, which means she attends every rehearsal—when she’s in town, that is. In February she was hired to oversee England’s City of Birmingham Symphony Orchestra, a prestigious appointment, given her age and the fact that she’s never led a major orchestra. (Through 2017, Mirga will be traveling back and forth between the United States, England, and Austria, where she is also musical director of the Salzburg Landestheater.)

It could be a daunting task to step into the shoes of Dudamel, who has been a sensation since his debut in Los Angeles 11 years ago, but the critical response to Mirga has been vociferously positive. Mark Swed, the Los Angeles Times’s classical music critic, called her “simply the most exciting young conductor to come along” since Dudamel himself. And that’s important, since the Phil is determined to attract a broader audience (read: patrons who aren’t old, white, and rich).

“She’s a musician whom audiences identify with,” says L.A. Phil CEO and president Deborah Borda. “That’s the magic of great conductors. They have to be able to communicate, not just with the musicians but with the audience. I can’t quite explain it—how that connection happens. All the technical things have to be right, but then there has to be something beyond that.”

That “something” was evident when Mirga was a child. There’s a video clip on YouTube of her as a ten-year-old contestant in a talent competition on Lithuanian television. In a black-and-white polka-dot dress, short lace gloves, and curls, she sings a poem set to music, accompanied by an orchestra. The confidence and the sly grin are instantly recognizable. As the song ends, she raises her arms, flashing a thumbs-up with both hands before curtsying.

Such showmanship didn’t come naturally to Mirga, even though her mother is a pianist and singer and her father is a choir conductor. Her parents had to persuade her to perform at first. She remembers arguing with her dad when he advised her to be more physically expressive when singing onstage. “I was annoyed that my father told me what to do. I think  my thought was, ‘What silly  acting.’ But I enjoyed it a lot— later,” she says, sitting in the  Phil’s greenroom at Walt Disney Concert Hall. Growing up  in Vilnius, Lithuania, Mirga  sang in her father’s choir but  never played an instrument.  Despite their initial encouragement, her parents wanted  her to pursue something “better grounded, more secure”  than music. Nevertheless, at  11 she decided to become a  choir conductor like her dad.  It was one of the few musical programs she wasn’t too old  to enroll in at the performing  arts school in Vilnius.

After completing her bachelor’s degree in Graz, Austria, she focused on orchestral conducting. “At the time I felt much more at home in the vocal music and less experienced with orchestral music,” she says. “I wanted to explore this rather unknown area and find out if it could be my home in the same way.”

Mirga didn’t have to wait long to find  out. In 2011, when she was 25, she applied to the L.A. Phil’s Dudamel Fellowship Program, which taps a couple of promising young conductors each year. Her video audition stood out. “[We] knew she was a major talent. Just completely natural yet dynamic,” says Borda. “Her energy, her passion, and her musicality—those came through.”

Once Mirga arrived in Los Angeles in 2012, her ascent closely mirrored that of Dudamel’s. He made his U.S. debut at the Hollywood Bowl as a floppy-haired 24-year-old; nine years later, in 2014, Mirga had her own American premiere on the same bandstand. (For the occasion she chose Mahler’s Symphony no. 1, a Dudamel signature piece.)

The two share a mutual respect. Mirga is quick to speak up if she thinks a musical adjustment needs to be made. In turn, Dudamel relies on her feedback. “Mirga is an impressive talent, which is immediately evident to anyone that works with her or sees her conduct,” said Dudamel via e-mail.

In her own conducting, Mirga favors consensus building with the ensemble. “To achieve the spirit of a team—that is the point,” she says of the more than 90 musicians she leads during most performances. “I need their thoughts, their inspiration and preparation and engagement. And they need certain things from me.” She speaks often of the “partnership” between orchestra and conductor.

Musicians who have worked closely with her describe a young maestro who’s neither intimidated nor overbearing. “She knows she’s standing in front of a lot of professionals who have been at this for a long time,” says L.A. Phil keyboardist Joanne Pearce Martin. “Not just 100 separate excellent players, but people who know how to play as a group. She allows the players to be themselves musically but gets her point across about how she wants it all to meld together. That’s a sign of a really wonderful conductor.”

Gidon Kremer, a renowned Latvian violinist, respects how Mirga dedicates herself to the music above all else. “She shares the same values as I am trying to live up to all my life—to take music more seriously than oneself,” says Kremer, who founded Kremerata Baltica, an orchestra composed of young Baltic musicians with whom Mirga has toured extensively. “When she’s in the process of music making, it’s not her ego that speaks, as it speaks with many other conductors and musicians.”

Inevitably, in nearly every interview, Mirga is asked what it’s like to be one of the few women in her profession. She often responds with a story about a Toyota Symphonies for Youth concert she conducted last December at Disney Hall. Afterward a group of mothers approached her to say how pleased they were that their daughters had the opportunity to see her wieldng the baton. “I was very touched and happy,” Mirga says. “I thought, ‘It is not only about me.’”

Administrators at the L.A. Phil have made diversity in the conducting ranks a priority; another woman, Susanna Malkki, has been appointed principal guest conductor for the 2017-18 season. But the conducting world is still dominated by men, even as orchestras are made up of more women than ever before (thanks, at least in part, to the introduction of blind auditions). The list of the “150 Busiest Conductors of 2015” on BachTrack, the classical music events database, includes just four women besides Mirga in the world.

In 2013, The New York Times interviewed Marin Alsop, the musical director of the Baltimore Symphony and the only woman to head a major U.S. orchestra with an annual budget of more than $15 million (the L.A. Philharmonic’s budget is close to $115 million). When men make forceful gestures while conducting, “they come off as being masculine and virile,” said Alsop, who at 60 is from a different generation than Mirga. “Sometimes when women do that, they’re interpreted as being pushy and bossy. I’ve really worked hard at trying to, sort of, degenderize my gestures.”

When I ask Mirga whether she has felt the same pressure, she answers without explicitly mentioning gender. “Being authentic is another great goal and an important one,” she says. “How to find it? Or what does that mean in conducting? And how can I be myself and do this job?” In the near future, Los Angeles audiences will have few opportunities to see how Mirga answers those questions. If you missed her Hollywood Bowl performance in July, you’ll have to wait until next March and April, when she will conduct three nights of Haydn and Mozart at Disney Hall.

After the announcement that Mirga would become musical director of Birmingham, the L.A. Times’s Swed expressed his hope that the additional responsibility wouldn’t be too much. “Gražinyté-Tyla is a born conductor and a mesmerizing one,” he wrote. “But she is still green.” He noted that the Phil makes certain allowances for her, as it did with other young musicians like Dudamel and his predecessors Zubin Mehta and Esa-Pekka Salonen. Borda, who knows the powerful draw of a marquee conductor, says that notwithstanding the demands on Mirga’s time, the L.A. Phil will give local classical music fans more Mirga in the coming years: “We’ve taken a real proprietary interest.”