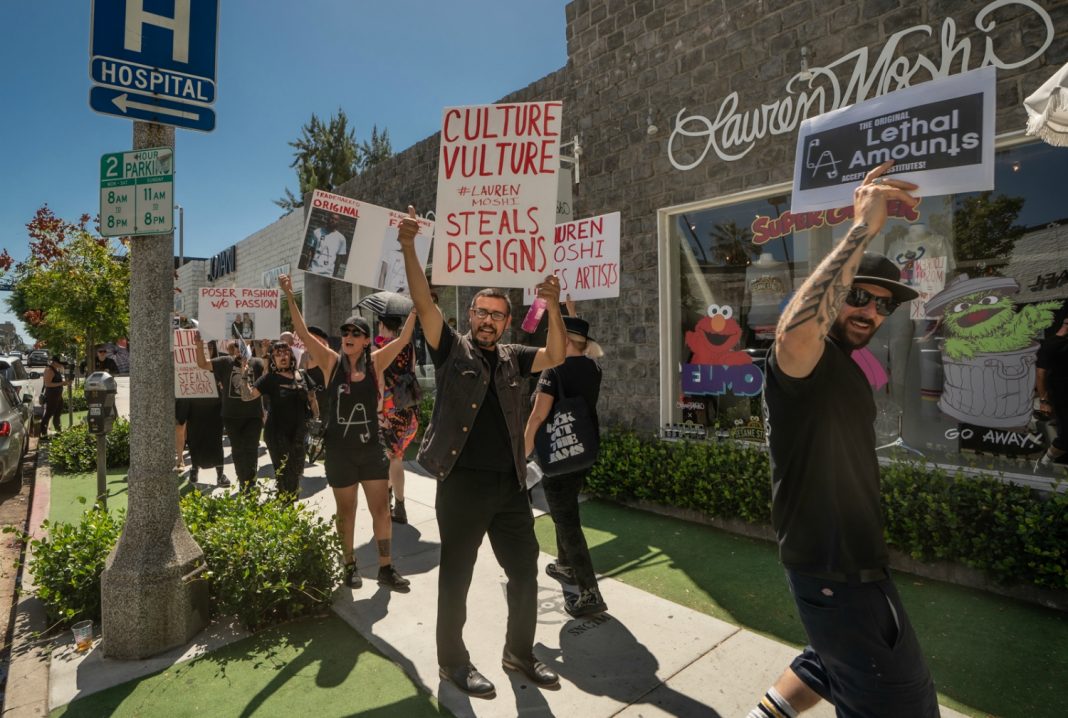 As shoppers in sundresses wended their way up Robertson Boulevard, a crowd of about a dozen protestors—many of them tattooed and clad in black—marched in circles outside Lauren Moshi’s Beverly Grove storefront.

The high-end retailer, brainchild of brother-sister team Lauren and Michael Moshi, has drawn the ire of some members of L.A.’s Latino punk community who believe Lauren Moshi used designs by other artists on her clothing. Waving signs that read “#LaurenMoshi is a culture vulture” and “Fraud is not Fashion”, the participants chanted, “What do we want? Integrity! When do we want it? Now!”

“We cannot let Lauren Moshi get away with appropriating someone’s artwork and calling it their own,” a Facebook event page for the protest says. “United we stand against CORPORATE GREED!”

The demonstration was organized by designer Xiana Tlacotl in solidarity with Lethal Amounts, the punk rock art gallery and apparel brand that’s been engaged in a legal dispute with Lauren Moshi over Lethal Amounts’ trademarked logo, which consists of two interlocking safety pins arranged to spell out “LA.” Several protestors sported the design at Saturday’s event.

Lethal Amounts founder Danny Fuentes first noticed an icon he thought looked similar to his own logo on a Lauren Moshi shirt in the summer of 2018. The Lauren Moshi design also depicted two safety pins ostensibly spelling out “LA,” but the clasps of the pins were designed to look like skulls. Fuentes sent a cease and desist letter to the company as a courtesy, but before he ever had a chance of bringing his case to court, Lauren Moshi responded with a lawsuit of its own, declaring that Fuentes never had the right to the image to begin with. After almost a year, the suit was dismissed. Fuentes has since said he will pursue a trademark infringement case.

At least two other L.A. artists—photographer Estevan Oriol and bike builder Tom Foster—have claimed that Lauren Moshi appropriated their designs in the past. Oriol brought a lawsuit against Lauren Moshi in 2017 for, he claimed, selling a T-shirt that featured one of his photographs. According to sources close to Oriol, the two parties settled the matter out of court.

“She has habit of taking designs from Eastside artists, co-opting them, and then exploiting them for profit while passing them off as her original work,” says Tlacotl.

While Michael Moshi serves as the company’s CEO, Lauren—an art school graduate—creates the designs herself. Apart from its flagship store on Robertson Boulevard, the brand’s clothes appear in boutiques around the world and on the backs of A-list celebrities including Emma Roberts, Gigi Hadid, Selena Gomez, and Kourtney Kardashian.

Lauren Moshi’s style borrows heavily from punk and post-punk aesthetics, emulating the stores of Melrose Avenue in the ‘80s and the Sunset Strip hair metal scene of the same time. While suggestive of subversive, anti-corporate artistic idioms, her line includes partnerships with Warner Bros., Warner Music Group, and Disney.

“Moshi’s business model is based upon co-opting and homogenizing subversive imagery onto T-shirts and sweatshirts to sell at an ultra-high markup to the extremely wealthy,” reads a legal filing by Fuentes. “Part of the appeal of Moshi’s products is that, by appropriating imagery that is typically associated with outsiders and marginalized communities, its high-end customers get to feel an exhilarating thrill that they too can partake in ‘cool’ and transgressive punk rock culture.”

“I would like for designers to use their own ideas and stay in their lane,” Tlacotl says. “This happens all the time, but this time there’s a name and a storefront.”