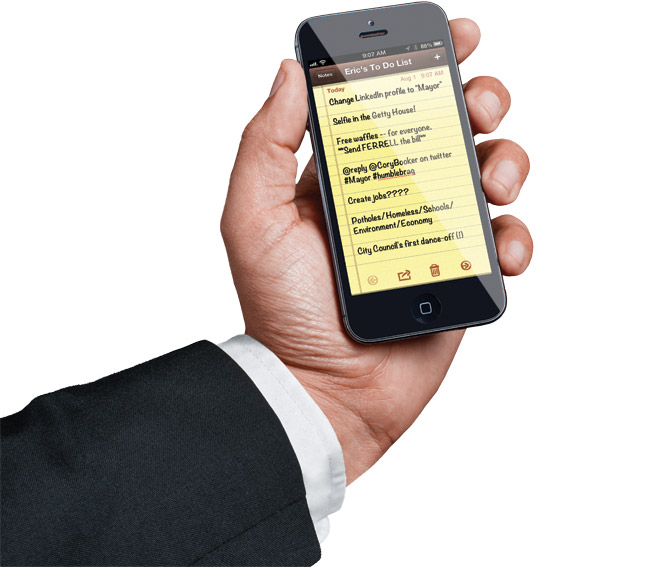 New York City has an emperor, but in L.A. our mayor is more Protector
of the Realm—that is, a leader who must satisfy multiple factions for the city to function. We’re not political strategists, but we are passionate residents of Los Angeles, and figured we’d offer our humble advice on how we’d like to see Eric Garcetti shape the city.

Do: Make us care about city politics
With his charisma and accessibility, Garcetti has a chance to educate apathetic Angelenos on how public office works and change the “weak mayor” perception. Thanks to social media, @ericgarcetti is L.A.’s most available mayor yet. If he’s transparent about his day-to-day, citizens might become more involved with local causes.

Don’t: Say yes to everyone
Politicians love to please, but with the city’s budget crisis, Garcetti would be wise to take his cues from Jerry Brown, who said no enough times that when he finally said yes, legislators paid attention.

Don’t: invite failure with a number one issue
He’s the Santa Claus of City Hall right now—everybody has a wish list. He’ll look like a failure if he focuses on a single problem too early and doesn’t deliver right away. If Garcetti does tackle a top problem, he should be able to resolve it—with tangible results—in the first year.

Do: Fix the potholes
Sure, that was his opponent’s claim to fame, but City Hall is a distant castle to most Angelenos, so hyperlocal improvements in their neighborhoods (schools, green spaces) will please residents and generate enormous goodwill.

Don’t: Quit the piano
Most people don’t know what city government does, but they get a feel for the person in charge. Garcetti’s offbeat talents (break dancing, piano playing) make him likable, which goes a long way.