Home Uncategorized Lessons in the Art of Flirting in L.A. 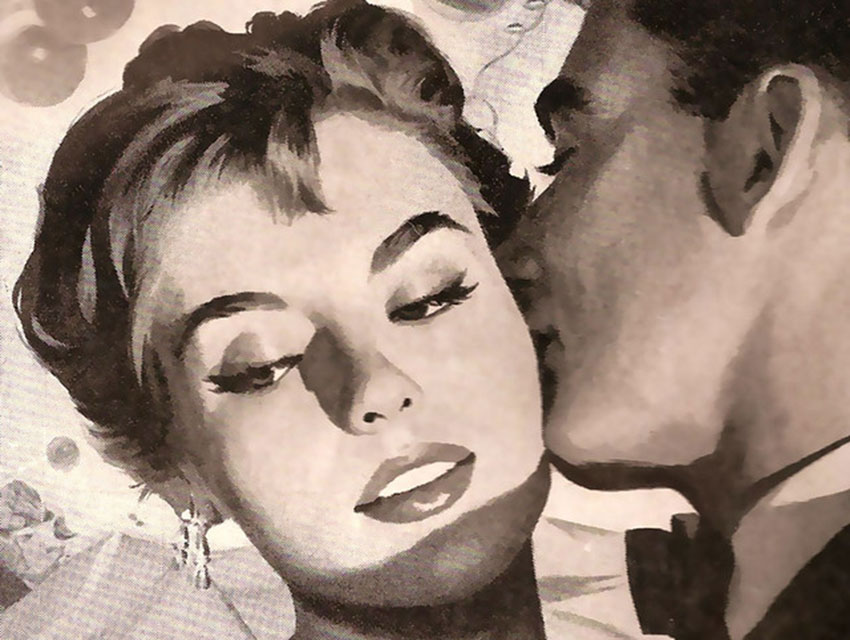 I come from a long line of women who knew how to flirt. I never met my great-grandmother Sally, but I am told she was a small-boned enchantress, a Southerner with the charm—and grit—often associated with women from that region. Next was my grandmother, a powerful presence, the belle of all she surveyed. I watched her in action with my big, handsome husband in the early years of our courtship. Flutter, flutter went her lashes. It didn’t hurt that he, too, was from the South. After that there was my mom, an actress with aquamarine eyes and a fetching affect. She lit up rooms. She was intrepidly single after divorcing my dad when I was four, and she was self-supporting thereafter. She was both liberated and beguiling, casting her beam on just about everyone. At the end of her life, when words were hard to lasso, she could still recall many of the expressions she had picked up during her girlhood in the south of France.

I took a new male friend of mine to see her because he also spoke French. From her prone position on the living room sofa, she smiled up at him and fell into fluent, flirty French. He kissed her hand, and she looked for all the world like the ingenue she had been, not someone slipping away.

I learned from watching them all. A relatively sheltered kid, I tiptoed gingerly into the dance of the sexes. I was the product of a girls-only high school, and my adolescent days were mostly marked by homework and deep female friendships, many of which last to this day. In short, I didn’t get off to a fast flirting start. It was not until the summer of my 17th year that I caught on, learning how to tip my head just so, crack a smart joke, signal interest in that foreign object: a boy. A very beautiful one, lanky and blue-eyed, started hanging around. We lay on the beach for hours, exchanging looks and the occasional gritty kiss. My mother and grandmother were most entertained at how tentative I seemed with him. I heard them clucking behind my back. I was irritated at their gentle judgment.

Then someone flipped a switch and I was, seemingly overnight, in love for keeps with a real grown-up man. He was my fate. We married just as I left college. But that did not preclude my warm flirtations as I started to make my way as a writer. In fact one of my first pieces was a defense of flirting, in which I argued that it was good for the soul, enlivening as long as you didn’t go sassing around to inflame the jealousy of your spouse or partner, and that you didn’t threaten other women, especially friends, by behaving provocatively toward their significant others (as happens in so many movies and books, both highbrow and low). I was talking about flirting as a thing unto itself, a moment in time, not a prelude to further entanglement.

The truth is, my husband was my place in the universe, and most of my day-in and day-out flirting was aimed at him, the sexy, sometimes gruff fellow with whom my grandmother was so smitten. He was the real deal, and our many years together were marked by a constant back-and-forth, an admiring, witty, sometimes disputatious hum that was always there even during the tough middle years, when money was tight and tempers were short. It was like an electric cord between us, if that makes sense. I often think married people stop flirting, just as they stop being kind, and that’s half the reason their unions go awry or get stale. I like to see long-wed couples ogle each other, and not in the goopy manner of those erectile dysfunction ads (they give me the creeps). I am thinking about something more playful, marked by affection and history and amorous shorthand.

Now, as a recent widow, I raise my voice again in praise of flirting. The timing might strike some as odd—even irresponsible—given all that we have read and heard of late about the violence directed at women, be it on college campuses or in their own homes or seemingly anywhere and everywhere around the globe. But flirting can be a sweet, emboldening step back from all that. It is not about subjugation but the very opposite. The whole point of the art form (dare I elevate it to such status?) is that it has to be consensual to the max or it dies aborning. Someone on the other end has to smile or fire off some clever repartee or the moment is over. If one party presses on when the recipient is emphatically not interested, then flirting turns into harassment—an ugly, even actionable behavior like those nasty quid pro quo casting couch suggestions. The dictionary definition of the verb flirt is “to show superficial or casual interest or liking.” This is (mostly) PG stuff, a flattering and amusing exchange with someone of the opposite sex or the same sex or whatever sex anyone says he or she is. If you want to see some of the most deliciously sad and tentative flirting ever caught on film, watch Jeffrey Tambor as the transgendering protagonist in the Amazon series Transparent. That will crack your heart.

As I move around this city in the middle of springtime, I love to watch young people flirt—in bars and bookstores and bistros, the girls in their floaty dresses or denim shorts. They seem confident, saucy, exuberant. They flirt across cultural and linguistic barriers. I listen for the rise and fall of their voices, their laughter shot through with optimism. I am not scared for them then. For women finding their way, trying to establish their own boundaries and figure out which men are nice and smart and winning, flirting is strangely illuminating in our hypersexualized world. If Anastasia Steele, the virginal, lip-biting heroine in Fifty Shades of Grey (the movie; I couldn’t get through the books), had engaged in a bit more flirting with Mr. Grey before being dazzled by his wealth and proffered goodies, she might have realized that he was not just a whip-raising sadist but a withholding prig.

I understand that a lot of flirting these days doesn’t go on in person. It happens online in the great dating supermarket. The technology itself is so seductive. It is wildly easy to send a quickie flirt into the ether in a moment of longing or anger. We’ve all done it, though I am very wary of the permanence of the message. You can’t take it back. That is not an eye-batting, never to be seen or witnessed again. If you are committed to a person, the game is dangerous. Mates always seem to find these extra-relational tweets or Facebook flirts—not to mention flat-out sex pics—and sorrow or rage ensues. Even the millennials frown on these virtual (or not-so-virtual) escapades. In a recent survey conducted by Fusion, a Web site dedicated to millennials, 82 percent of those polled said that to engage in cyberflirtations when you’re already in a relationship is a form of infidelity.

Maybe my sample is skewed, but I sense at least some aversion to certain online behaviors, even among those who have been weaned on connectivity. A twentysomething woman I know said she took herself off Facebook. While she might text a gently flirty “hello” to her boyfriend, she mostly uses her cell phone to set dates or appointments, while leaving the bantering and byplay for the actual meeting. I hear the same from my 17-year-old stepgrandson.

“In the wake of all the weird and mean stuff that has happened on social media since its inception, people are more creeped out at the idea of meeting people online than they once were,” he told me. He says his pals text as a way of staying in touch or making plans with a girlfriend or prospective date but that the real flirting takes place in person. “If you are funny, smart, a big talker, or do stupid things like hit watermelons with a mallet, that all seems to go over much better in person. Plus you can pick up cues much better and identify whether someone really is into you or not.”

As for me—not happening. No posted profiles out there. No perky pictures. I am taking baby steps in my return to the world. I now feel newborn, unprotected. I did catch the eye of someone a few months ago. I was driving in an alley and spotted a wandering dog. I stopped when the owner came around the bend. He smiled. I rolled down the window. We chatted. It was almost a flirt. My heart was pounding, and I felt about 16. That will hold me for a while.

After Just 6 Weeks of Dating, This Local Couple Is Doing Thanksgiving with the Fam

A Year After They Swiped Right, This L.A. Couple Finally Got Together