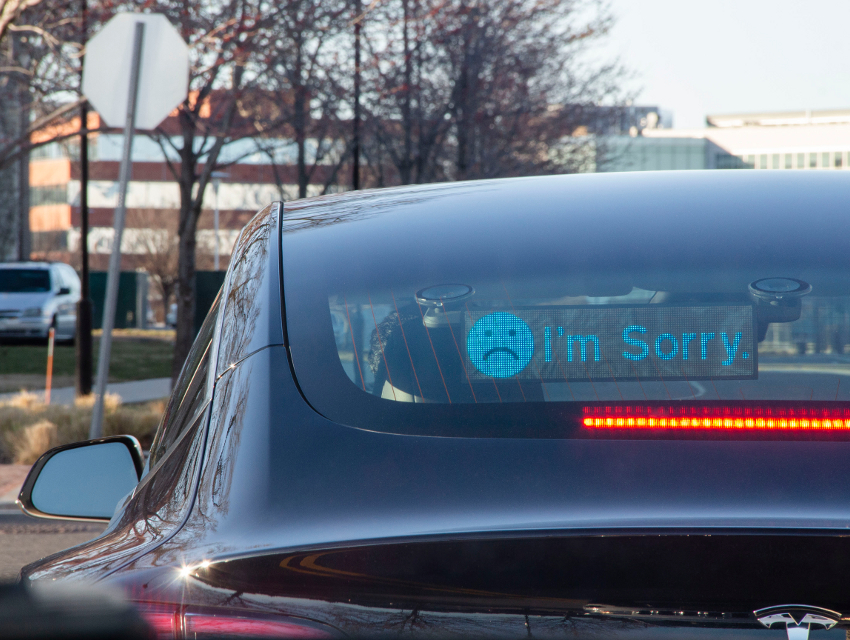 When it comes to technology improving the experience of driving, not much has changed since the advent of airbags, Bluetooths (teeth?), and Waze. But a Philadelphia-based company called MOD, which bills itself as a “human experience agency” now venturing into “entrepreneurial endeavors,” has a novel idea to allow drivers to communicate with each other on the road.

MOD’s RoadWayve is an LED screen that attaches to a vehicle’s rear window, allowing drivers to share messages like “I’m sorry,” “Thank you,” “Go around,” “Turn off high beams,” and “Let me merge,” many accompanied by emojis. The company’s CEO and founder, John Stanley, says the impetus for the invention was his mother—a good person but a bad driver, Stanley says—who inadvertently cut someone off and was subjected to a severe case of road rage.

“We believe that communication bears incredible value in resolving disagreements, however, there is no easy way to communicate respectfully with other drivers on the road,” Stanley says in a statement, overlooking the customary (if oft-neglected) hand wave.

The messages can be activated via an app, voice controls, or a remote. Somewhat oddly, MOD says the product allows customizable messages (!), along with a preset library. The updates are visible for up to 50 feet, depending on weather conditions.

Pricing right now is $99 for pre-order (half off the forthcoming retail price, according to MOD) on RoadWayve’s Kickstarter page, which has hauled in upward of $85,000, quadrupling its original $20,000 goal. (The crowdfunding campaign ends on June 19.)

The California Highway Patrol didn’t respond to queries regarding the screens’ legality, but RoadWayve insists the product is safe and legal. Company spokesperson Paxton Shaw tells us, “RoadWayve has a bluetooth voice control option, hence this can be used in California as long as bluetooth is enabled on the device.”

Screens reserved via Kickstarter are expected to begin shipping in July 2020, at which point we’ll find out whether digital emojis curb or fuel people’s behind-the-wheel blind rage. Stay tuned.