Home Sports For Most College Football Players, the NFL is a Pipe Dream 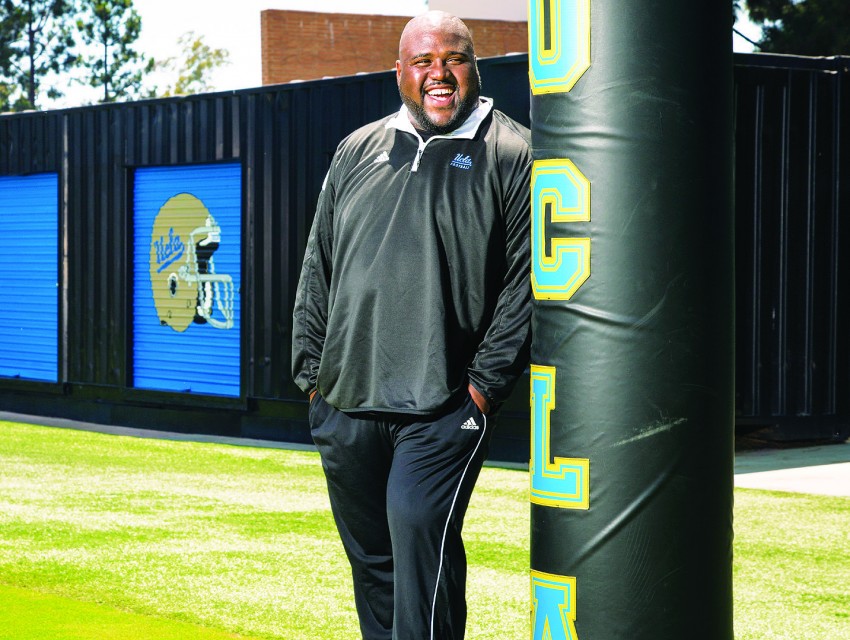 On a hot morning at Cal State San Bernardino, I am standing next to Courtney Morgan as he scans the field where 110 UCLA football players are being put through their paces by head coach Jim Mora and his assistants. This is week two of training camp. The temperature is rising into the 90s, and the guys are not letting up. With an eye both paternal and pragmatic, Morgan watches them, though his coaching follows a different path. He isn’t about grooming athletes to realize their visions of gridiron glory. As director of player development, his job, as he sees it, is almost the opposite: to help them flourish when the dreams die hard.

“For an elite athlete the dreams start so young,” he says. “You become consumed. I can look out there and tell you that at least 70 of the players want to go pro, and most of them won’t make it. We had only four drafted last year, and seven went free agent. The difficult thing is to watch your friends get drafted. The guys you are eating Top Ramen noodles with one day, two days later—or after April, when the draft happens—they’re millionaires, and you go, ‘Damn, that should have been me.’ ”

The 33-year-old Morgan knows this turf cold. A native Angeleno, he was a star player at Westchester High and went on to become an offensive lineman at the University of Michigan. He had a brief flirtation with the NFL, but it didn’t work out. In a way he was lucky. He went into business selling medical devices and was able to transition back to civilian life.

“We don’t ever stop our kids from trying to get to the NFL,” he tells me in his gentle voice. “But even if they get there, the run is short. I just learned a statistic that I keep in my phone: The NFL has no more use for most players by age 25. That means that by 25, there’s little economic payoff for the only skill the players have developed. My goal is to get these kids to see that and make the most of their college opportunities.”

I’ll be honest: I had paid only modest attention to the plight of college athletes. I was aware that their scholarships covered tuition and room and board, and I thought that was enough. What I didn’t know was how tough it was for many of them to cover basic essentials. They have to cough up for their meals if they miss the ones with the team, which can send them into debt, an average of $3,000 by the time they graduate. Small stipends could alleviate that shortfall, but as amateurs the players are not allowed to accept money, although their schools make millions from their exhausting, sweaty work. Think packed stadiums and tailgate parties and obsessed alumni, not to mention TV rights. Hear the coast-to-coast ka-ching each weekend as the athletes put their bodies (and vulnerable brains, it might be added) on the line. “There is something wrong with a school making $60 million and these kids getting nothing,” Morgan says. “They shouldn’t want for anything when they’re playing, including airfare home to see their families. We got a kid from Florida, and he said because of the rules, if his mom can’t afford to buy him a ticket, he can’t go home. That’s crazy.”

Recently a judge moved closer to prying open the coffers, ordering the National Collegiate Athletic Association to pay athletes for the use of their names and likenesses—a minimum of $5,000 per person per year. She also ruled that the NCAA may not prohibit universities from offering cost-of-living payments. It’s a start.

For Morgan the job is personal. He wants to protect the young men out there, the majority of whom are African American, in a way he could not save his best friend, Charles Drake, who committed suicide by setting himself on fire two years ago in Culver City. They had been teammates through high school and college. “We were like brothers,” says Morgan, who’s an only child.

Drake had been drafted by the New York Giants, then was cut at training camp. After a couple of years playing in the NFL in Europe, he came back to the United States and was signed by the Detroit Lions. When he was let go, he knew his career was over. During the next five years, Morgan watched his friend spiral downward. “He had kids and bills to pay, and there was this confusion: What am I going to do, and who am I? I remember him telling me, ‘The people who used to pick up the phone to call don’t pick it up anymore.’ Football keeps you so busy. When you lose that, you lose a lot. You lose a big piece of you. You lose your teammates. And then you feel alone. I think I am one of the few people who totally understood what he was going through.”

Even Morgan, who was pretty clear-eyed about his own football career—what it was and wasn’t—found himself yearning to get back into sports, especially as he watched his friend hit bottom. He started volunteering with a Little League team in South L.A. and loved it. Then an old friend came calling, a coach who had known Morgan when he was a top high school recruit. That buddy, Adrian Klemm, had been hired at UCLA, and he encouraged the school to bring on Morgan as an offensive coach. The players were soon seeking him out to talk about all kinds of issues, on and off the field, so Mora created the player development position last year. Morgan is now, in effect, mentor-in-chief. His office is next door to Mora’s, a sign of respect for the contribution he makes.

“There are kids who come in from different backgrounds, different socioeconomic levels,” Morgan says. “They’re the ones who really need the guidance and the transition programs. But the truth is, they all need it—including those from stable backgrounds. We live in a microwave society where kids want success right now. They have thousands of followers on Twitter and Instagram. They come here feeling they’ve arrived.”

The first step is what Morgan calls the “derecruitment” process. “You have to let them know, ‘Hey, during recruitment, we were kissing your butt. Now shut up and do what you’re supposed to do.’ ” He is also trying to help them envision the future. Twice a month he hosts college-to-career classes—mandatory for freshmen—in which professionals from around the city talk to the players. Some become mentors. “It’s about putting the kids around people who don’t look like them and don’t think like them,” Morgan says. “When you set them up with someone in finance or fashion or entertainment, they start having different conversations.”

He considers L.A. the land of opportunity—a major selling point for potential Bruins from out of state. His efforts are starting to show results. He was able to place one recent graduate with the high-profile Landmark sports agency and another with a medical sales company. He is always networking, which is precisely what he’s trying to teach the young men to do. “The average GPA at UCLA is 4.4,” he says. “If you’re an athlete and get in with a 2.6, you still have an advantage because you have built-in connections and tons of alums who know who you are and want to have lunch with you. My goal is to get them to see that. We start talking to them about this when we recruit them, about branding themselves. We help them set up a LinkedIn page. A lot of the time athletes have tunnel vision, and they don’t start working on these things until it’s too late.”

The sun is fierce now on the San Bernardino field. The assistant coaches are still barking orders. I ask Morgan how many of the guys are hearing his message. It’s challenging, he says, because the picture of happiness in the culture, especially for athletes, is the house, the car, and the model girlfriend. As we look at the players, he tells me he can already point out those who are going on to the NFL, and those who are going to be OK if they don’t make it, leaving the futures of many of these young men up for grabs. Morgan feels hopeful and wistful, and maybe just a little angry—all sentiments I share.

“I always call football a gift and a curse,” he says. “A gift because it gets them to college, a gift for them to understand a lot of principles about life. And a curse because it’s over one day, and it’s all they know.”