Home Transportation This L.A. Neighborhood Will Soon Be Wiped Off the Map 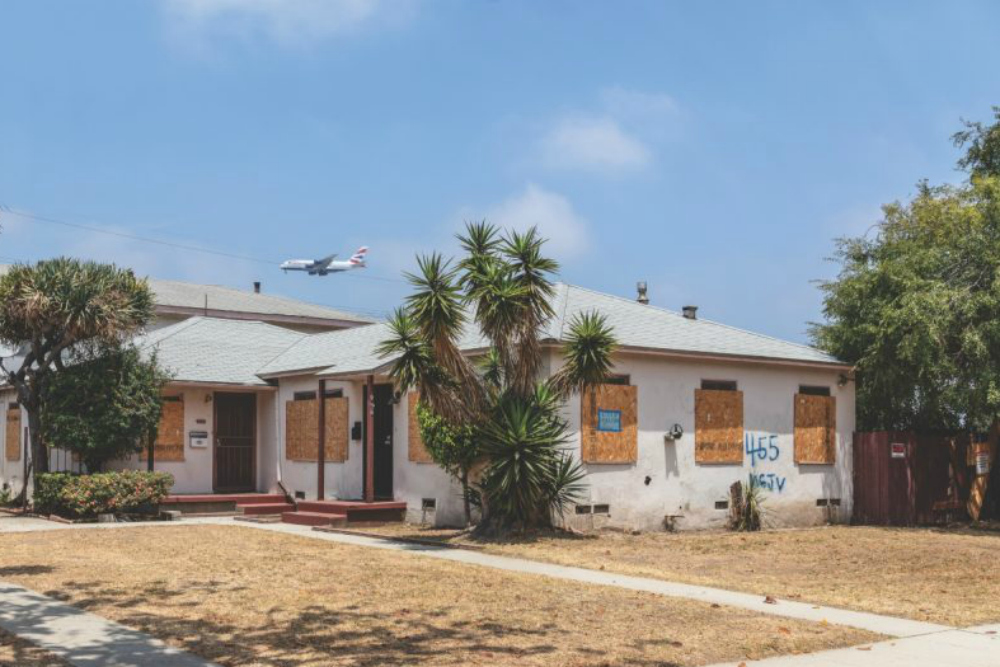 The quiet streets of Manchester Square evoke a strange kind of apocalypse. The homes at the center of the quarter-square-mile neighborhood have been razed and replaced with a grid of chain-link fence and dry grass. The outer streets are lined with parked cars and abandoned apartment buildings, their windows boarded up and mailboxes torn out. Signs are posted everywhere: NO PARKING, NO TRESPASSING, SIDEWALK CLOSED, SOUTH SIDE TOW. Office chairs, dresser drawers, satellite dishes, and other detritus lie strewn about the front lawns and in the alleyways that are stalked by feral cats. The silence is intermittently broken by an airplane roaring up from LAX a mile to the east, and if you listen closely you can hear the sound of children—a school is letting out, one of the last signs of life left around here.

Given the region’s housing crisis, the specter of a once-quaint 1940s-era neighborhood rotting away may seem almost perverse, but Manchester Square is making way for LAX’s consolidated car rental facility, slated for completion in 2023. But the neighborhood has been dying for about a quarter of its existence. “It was in a unique situation,” says Mark Waier, spokesman for Los Angeles World Airports, or LAWA, the city department that runs LAX. In 1997 LAWA unveiled a master plan calling for an expansion that would result in planes being rerouted over Manchester Square. LAWA offered to install extra-thick windows to muffle the noise, but homeowners made a counterproposal: Buy their houses. LAWA agreed. A kind of panic ensued as properties were purchased on a first-come, first-served basis. Few wanted to be left owning a house in a ghost town beneath a procession of passenger jets.

As many as 400 homeless people had moved in at one point, living in tents, RVs and cars.

Officials began imagining what they could do with Manchester Square. After 9/11 there was talk of creating a secure check-in area there. A lawsuit killed that proposal. Another idea was for the rental car facility, but final approval remained elusive. By 2005 more than 80 percent of the single-family homes and about a third of the apartment buildings had been purchased, but the city still had no plan for what to do with Manchester Square.

Some of the remaining dwellings have been used in police and fire department training exercises or as sets in commercials and music videos. Airport employees parked their cars on the streets. As many as 400 homeless people had moved in at one point, living in tents, RVs and cars. By then, the airport had revived its plan for the car rental facility and redoubled its efforts to pry loose the few dozen or so residents who held on.

“LAWA put us through hell,” says Jena Morgan, who lived in a Manchester Square apartment building for two decades before moving to Torrance late last year. She says that her rent has tripled and that she had to wade through layers of bureaucracy to get the money she was promised. “They treated us like objects.”

LAWA’s Waier says that apartment tenants received between $50,000 and $80,000 for leaving and that homeowners voluntarily sold. Eminent domain never came into play either, although the city got a court’s approval to use it. Soon the last of the handful of remaining occupants will be gone. The two charter schools that share a campus in Manchester Square will operate for a final year. Then the neighborhood will be wiped from the map.

RELATED: A Massive LAX Redo Could Transform the Airport Nobody Loves Into One Everybody Loves