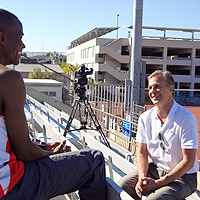 Following months of research and just days away from touching down in Heathrow, NBC reporter Robert Kovacik tells us what his “dream assignment” of covering the 2012 Olympics in London entails.

Q: You’re heading to London! What storylines are you most looking forward to tackling?
A: There is no state in the entire country that has more athletes participating than the state of California. You have returning players like Greg Louganis, a four-time Olympic gold medalist, who has been asked to join Diving USA as a mentor—the first time any sport is going to have a mentor. There are also people who are living here in Los Angeles, originally from London, who are going back because they wouldn’t want to miss this moment where their city is going to shine.

Q: How are you preparing?
A: We are already starting our coverage. NBC4 here in Los Angeles [has been] devoting a specific story [each night] to the Olympics. Our entire NBC team has been at this since I was told I was going to London back in January.

Q: Which local athletes are you excited to see compete?
A: There is going to be one specific race, the 800 meters in track, where I know there are going to be a number of Southern Californians rooting for the athlete from Zambia. I had the opportunity to meet Prince Mumba, who told me he will not only be running for his homeland, but will also be running for the Santa Monica Track Club—and he will be running in particular for the students he coaches at Windward, the independent school in Mar Vista.

Q: What challenges do you foresee?
A: We’ll be under severe time constraints, and we’ll be in a foreign country. London itself has a number of different rules and regulations that we need to follow: For instance, when you can and cannot take out your smart phones and tablets in what is known as “the Mixed Zone,” where athletes and the media gather. Another challenge will be the weather. The forecast may predict lots of rain, but, as [British Consul-General Dame Barbara Hay] told me, “The Olympics are almost three weeks long, darling. There will be at least one day of good weather.”

Q: The schedule of events looks intense. Will you have any down time?
A: When you’re a journalist and the most exciting event in the entire world is taking place outside your hotel, you’re going to sleep with one eye open, waiting and hoping that the phone rings and someone’s got some place for you to go, something to tell you, or a story that you just have to cover.

Q: If you do get time off, how will you spend it?
A: Hypothetically, I’d go to places like Notting Hill, Piccadilly Circus, or the London Zoo to see how the Olympics and the influx of people have changed the simplest of venues.

Q: Journalists from around the world will be competing as fiercely as athletes for coverage. What’s your ultimate get?
A: The ultimate get is the get that nobody else gets. How about a picture of Queen Elizabeth wearing a Los Angeles Kings cap.