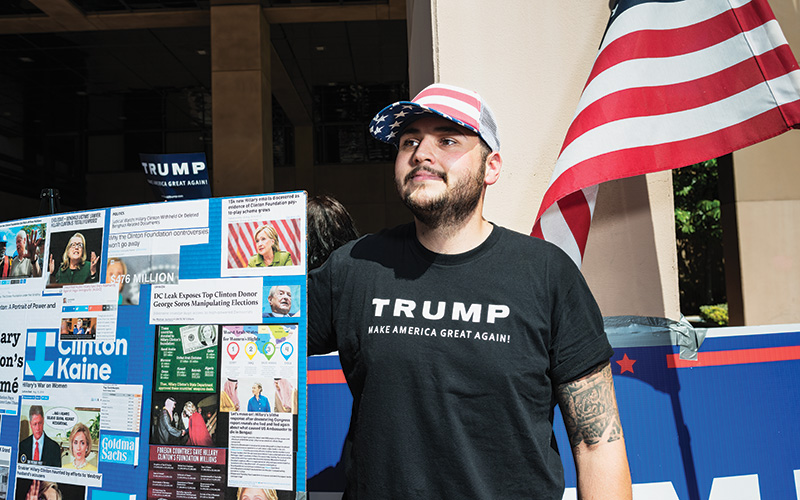 On the final night of the Republican National Convention, Jorge Herrera arrives in blue scrubs at the Elephant Bar in Torrance and orders an ahi salad and a margarita. Donald Trump has already concluded perhaps the darkest presidential acceptance speech in his party’s history—evoking an America bilked by trade deals, overrun by illegal immigrant criminals, and menaced by terrorists. Herrera wasn’t able to hear the speech live (he works late hours as a hospital nurse), but the 31-year-old embraced the real estate mogul’s arguments the better part of a year ago. As a Latino who supports Trump, he belongs to the most unsung political constituency of the 2016 presidential race. “I’m not claiming we’re a majority, because Democrats have historically done better with Hispanics,” he says. “But we just have to be vocal to destroy the lies that we don’t exist.”

In September 2015, Herrera struck a blow against that narrative at a Trump campaign event in San Pedro. On the USS Iowa, as the candidate digressed from his foreign policy speech to invoke the specter of drug thugs crossing the border and the wall he would build to keep them out, protesters began shouting, “Dump That Trump.” Herrera had come prepared. Waving a homemade orange sign that read “Support Our Vets!,” “#MakeAmericaGreatAgain,” and “#latinosForTrump,” he shouted back, “USA! USA!”

Breitbart.com trumpeted its story of the event with the headline “Mexican Stands Up to Donald Trump Protesters,” even though Herrera was born in Inglewood. Other Latino supporters of the billionaire turned candidate commandeered #latinos4trump for their social media proﬁles. Despite putting in 12-hour shifts and working toward his degree as a nurse anesthesiologist, Herrera (aka @AmericanMex067) became a proliﬁc political tweeter.

Trump’s level of Latino support has been low throughout the campaign. In mid-July an NBC/Wall Street Journal poll found an 80 percent unfavorable rating among registered Latino voters; in a Univision poll released around that time, 73 percent of registered Latinos answered yes to the question “Do you think Donald Trump is a racist?” Herrera ﬁnds that characterization unfair. “To want the U.S. to reform its immigration policy and still allow 1 million to come in each year and have a secure border? From a logic standpoint, there is nothing racist, bigoted, and xenophobic about that.” To demonstrate his high regard for his heritage, Herrera rolls up his left sleeve. “I have a tattoo of the eagle, and the Aztec calendar,” he says. “This is Quetzalcoatl. I’m a proud Mexican American, but I love my country—the United States—more than anything in the world.”

As Herrera recalls it, no one in the South Bay neighborhood he grew up in took issue with a son of (legal) immigrants from Mexico who worked hard and tried to build a better life here. (His parents eventually became citizens.) Tweeting in service of Trump, however, Herrera has encountered intolerance and viliﬁcation. “I’ve gotten threats repeatedly online,” he says. “I’ve been called a faggot, a beaner, ‘You should die.’ I’ve experienced more racism from the left than I’ve ever experienced in my life. It’s crazy.”

Like many Trump supporters, Herrera came to his candidate disillusioned about the favoritism that he believes both parties shower on the ultra-rich, be it through trade deals or domestic economic policy. “I used to be a hard-core Republican,” he says. “And now I’m like, ‘Holy crap, they’re screwing us over, too.’ ” As for any economic gains made during Barack Obama’s tenure, Herrera asks, “Where have they gone? To the top one percent. The income of minorities has shrunk. The middle class has shrunk. We have record poverty, record people on welfare.”

By the time Herrera ﬁrst tuned in to Trump’s candidacy last year, he was open to outsider alternatives. “I’m like, ‘Holy crap, this guy’s saying a lot of stuff that I agree with as a Latino.’ ” He didn’t have much of a problem with Trump’s characterization of Mexico sending us its worst—criminals, drug dealers, and rapists, with perhaps a few decent people mixed in. “I wish he would clean up his tone a little bit,” Herrera says, “but that doesn’t bother me because it’s the truth and we need to solve some of these problems.”

On Herrera’s Twitter photo, his mouth is set in a tight grimace, and his dark brown eyes stare down beneath the bill of his “Make America Great Again” cap. In person he’s genial, chatty, smiling often as he defends Trump against his critics with data culled from the Internet. He is more relieved than angered that Trump has begun tiptoeing away from his vow to forcibly deport those 11 million people who are here illegally. “I think he’s going to move a little bit center, maybe left,” Herrera says. “He might deport all the criminals.” On this essential Trump issue, Herrera seems conﬂicted. He believes that the media focus on Trump’s harsh rhetoric while largely ignoring the rise of deportations under President Obama. “My friend came here illegally from Peru when he was ﬁve years old,” Herrera says. “He had a deportation order under Bush, but Bush never enforced it. My friend graduated high school here. He had a job; he paid taxes. Obama got into power and deported him. He is deporting people from Central America who are requesting political asylum—people who need to be here and should be here. He’s going to their houses.” (A few weeks after our conversation, the Obama administration announced that it would expand its program of admitting asylum seekers from Central America, which had been limited to unaccompanied children.)

To Herrera’s relatives in Mexico, his enthusiasm is bewildering. “They said, ‘Why are you disowning your parents?’ ” he recalls. “ ‘Why are you disowning your culture?’ And I told them, ‘Why don’t you focus on your country, where the government is more corrupt than ours? Our Mexican culture is being murdered by narco traffickers, OK? What has the government done to help the people of Mexico?’ ”

Closer to home, Herrera was able to win over his mom’s vote after she read the candidate’s book The Art of the Deal. His father has been a tougher sell. “My dad’s old-school Mexican,” Herrera says. “I don’t think he wants to be perceived as going against his people.”