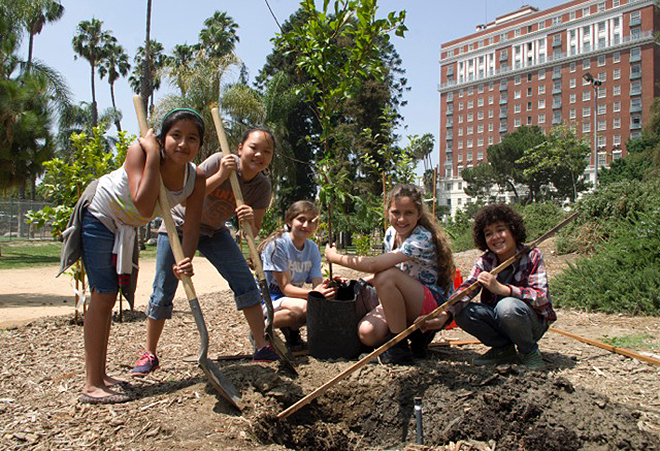 We have an upsetting update to yesterday’s Los Angeles Times story about L.A.’s first Urban Fruit Trail, the path of 150 stone fruit and citrus trees being planted by children enrolled in the Heart of Los Angeles youth program along with artists Austin Young and David Burns: all but a few of the 28 trees recently planted in the Lafayette Park area were vandalized last night. Some were snapped in half, others pulled out of the ground. HOLA publicist Lee Schube says she spent the morning speaking with police. “Everyone is devastated,” she says, “but we’re not going to let it get in the way of the project.” Plans for the fruit trail, which Burns has said is about “transforming our relationship to the city and each other,” remain underway—with new security considerations. HOLA has reached out to gang intervention group Aztecs Rising, who will invite the youths they work with to help replant the trees. “I’m thinking of this as an urban natural disaster,” said Young. “We’re going to come together, plant the trees, and continue making a great public project.”

A celebration of the Urban Fruit Trail is scheduled for July 20th in MacArthur Park. Details for the picnic, which will begin at 4 p.m. and is open to the public, will be posted at the Heart of Los Angeles Web site soon.