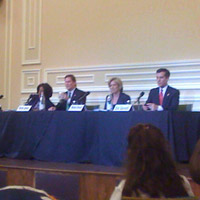 The Hollywood Chamber Political Action Committee hosted a debate between four of L.A.’s mayoral candidates—the first leading up to the municipal primary on March 5, 2013—at Taglyn Cultural Complex Wednesday night. Police, protesters, and hubs of Greuel and Perry supporters mobbed a block of Vine St. outside of the building. Unfortunately, things weren’t as exciting inside.

Over the course of about an hour, City Councilman Eric Garcetti, City Councilwoman Wendy Greuel, broadcaster Kevin James, and City Councilwoman Jan Perry took turns answering four questions lobbed from event moderator Tracie Savage, who before kicking things off joked about the candidates “having to answer my questions.” Well, sort of.

Asked if they would have voted for the Hollywood Community Plan Update, Garcetti, Greuel, and Perry answered in the affirmative (Garcetti did in fact vote for the plan), while James said absolutely not, calling it “dangerous for the community and bad for the economy.” Their first responses drew a line between the councilmembers and James that only thickened over the course of the evening. Garcetti, Greuel, and Perry focused their stances on job creation (I can do it!), tax and pension reform (we need it!), extending tax credits to abate runaway production (let’s make it happen!), and streamlining the permit process for business owners (it would help!), with nuanced differences between them.

James, on the other hand, focused on casting his fellow candidates as ineffective leaders responsible for what he called a broken City Hall. During her closing statement, Perry finally got in a jab of her own, telling James he should visit her Web site to learn more about her. Garcetti, on the other hand, maintained his characteristic positivity: “It doesn’t matter where you come from, who you love, how you worship god, it doesn’t matter what your last name is or which language you and your parents spoke. What matters is the size of your heart.”

After the debate, both James and Garcetti told us they felt good about their performances.

“The city is in too much of a crisis for me to worry about coming across as negative,” said James. Garcetti sees it differently. “We’ve been great at fighting,” he said. “But it’s leadership that actually brings us together.”