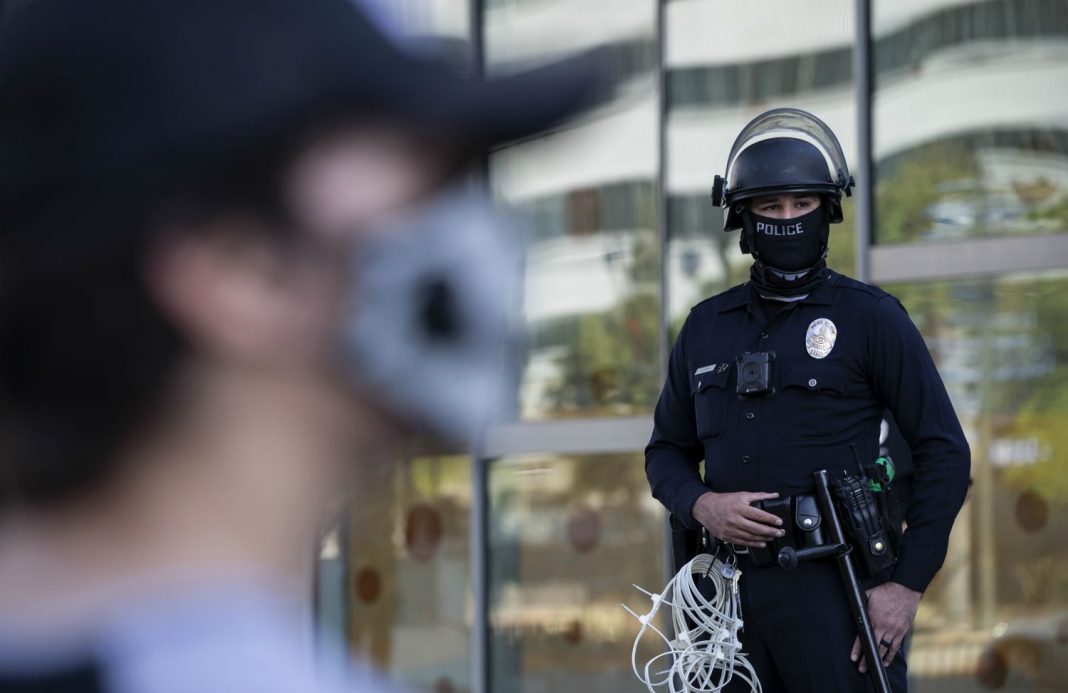 The outcry following the killing of George Floyd by former Minneapolis police officer Derek Chauvin has put a spotlight on the tactics of law enforcement agencies across the country. In Los Angeles as in other cities, there have been vociferous demands to reduce police use force, particularly against unarmed Black people.

That demand raises a question: How often do Los Angeles Police Department personnel use force, lethal and not? The topic has particular resonance as council members and Mayor Eric Garcetti are currently debating the city budget amidst cries to decrease police spending.

There are various tabulations of police use of force, including an annual report on the subject compiled by the LAPD itself. The 2019 Use of Force Year-End Review runs nearly 400 pages and contains a litany of information and statistics on everything from people killed by police gunfire to K-9 unit deployment to the challenge officers face in responding to homelessness.

Some may question the veracity of the findings, given the source. Leaders of the Black Lives Matter movement have asserted that 601 civilians have died at the hands of local law enforcement agencies since 2012. The tally appears far higher than findings from the LAPD.

That also differs from figures detailed in the Los Angeles Times’ Homicide Report. A database published Tuesday found that, from 2013 through the present day, county medical examiners have counted 335 killings of individuals by local law enforcement agencies. Since 2000, according to the Times, 885 people in L.A. County died at the hands of police, with nearly 80 percent of them being Black or Latino.

In the LAPD review, Chief Michel Moore touts advances in policing practices, but also cites troubling trends; he references a decline in Officer-Involved Shootings (OIS) in the department last year, but notes a 6 percent rise in the number of rounds fired. In comments made well before police engaged in violent confrontations with protesters on the streets of L.A., he acknowledged the negative impact that a forceful response can invoke.

“A police officer who uses force upon an individual has the potential to tear at the fabric of public trust we work so hard to maintain,” he states at the top of the report.

According to the review, the number of OIS incidents, and the number of people who died in those encounters, has been steadily falling since 2015, though figures from the department still outpace some other large U.S. law enforcement agencies. The report also found that other uses of force by LAPD officers have been rising.

The department characterizes use of force in two ways: “categorical,” which involves deadly force such as a shooting or a head strike with a weapon; and “non-categorical,” which the review defines as when a department employee “uses a less-lethal control device or physical force to compel a person to comply with the employee’s direction, overcome resistance of a person during an arrest or a detention, or defend any individual from an aggressive action by another person resulting in an injury or a complaint of injury.”

The latter category covers a range of actions, everything from what the review terms “firm grip/joint lock,” to using Tasers and employing weapons seen in the recent clashes between police and protesters, such as batons and the firing of green, 40mm “less-lethal” launchers. According to the review, in 2019 there were 2,320 non-categorical use of force (NCUOF) incidents, up nine percent from the 2018 figure of 2,125. In 2015 the department recorded 1,825 NCUOF incidents.

In most encounters multiple types of “non-categorical” force were employed, with “body weight” involved nearly 1,800 times last year and the “firm grip/joint lock” utilized in more than 2,100 instances. On 871 occasions LAPD employees engaged in a “takedown/leg sweep.” Batons or other impact devices were wielded on 33 occasions, and the 40mm “less-lethal” launcher was fired in 62 incidents.

Data components from the NCUOF instances include:

The 2019 review includes many other elements, from pages describing de-escalation training for LAPD officers, to a synopsis of officer-involved shootings. The latter incorporates officer-worn body-camera footage from dozens of OIS incidents.

Although making body-camera footage available and publishing the annual use of force review are cornerstones of the LAPD’s efforts to increase transparency, the department’s stances and actions continue to be strongly questioned by some observers. The California Police Scorecard, a website that uses a range of data streams including police shootings, injuries to civilians, and other criteria, gives the LAPD an “F” grade, with a total 38 percent rating. The Scorecard (put together by Campaign Zero, which aims to eliminate police killings) ranked the LAPD 89th out of 100 California police departments.

The San Francisco Police Department was judged nearly as harshly, with a 42 percent score. Only three departments in the state—Tracy, San Mateo and Carlsbad—received grades higher than 80. The Scorecard gave an F to 70 departments.

RELATED: L.A. Councilmembers Are Being Blasted for LAPD Hypocrisy