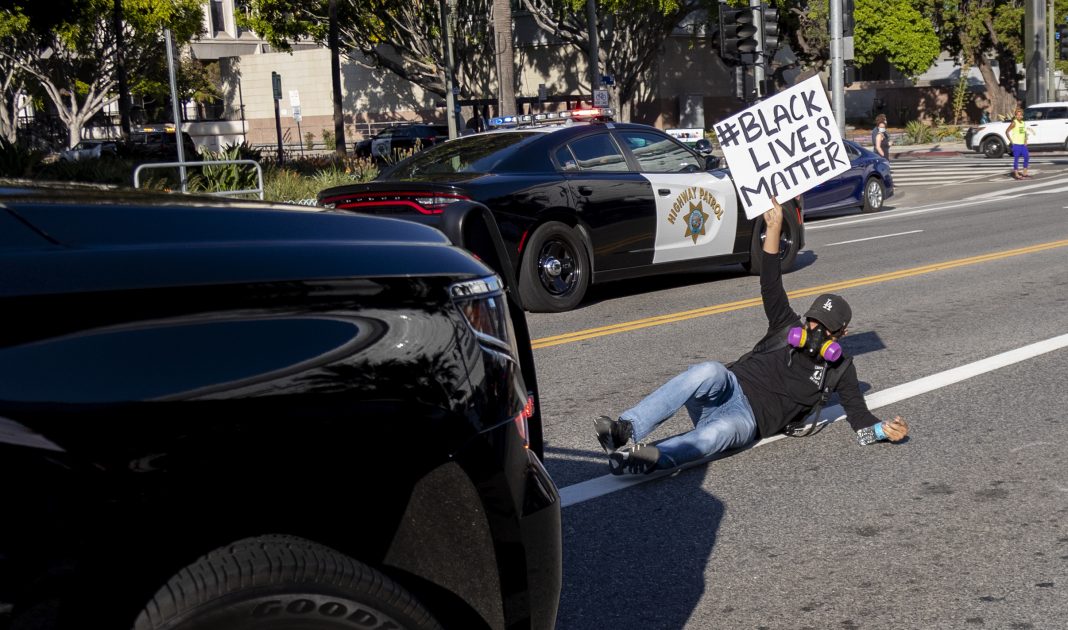 On Friday, a third night of protests against racism and police violence following the death of George Floyd in Minneapolis resulted in “mass arrests” in Los Angeles. According to the Los Angeles Times, more than 500 people were arrested and several downtown stores were vandalized, including a CVS and a Whole Foods. Four police officers were reportedly hurt; no tally of injured demonstrators has been provided.

At around 9:30 p.m., the LAPD ominously tweeted that it was declaring an “unlawful assembly” throughout downtown because of “repeated acts of violence.” “Residents should stay inside. Businesses should close. Those on the street are to leave the area.” As commenters pointed out, downtown’s many unhoused residents wouldn’t have the option of clearing the streets or staying inside.

We have declared an unlawful assembly throughout Downtown LA.
From the 10 Fwy to the 101 & the 110 Fwy to Alameda—This is being made following repeated acts of violence & property damage. Residents should stay inside—Business should close—Those on the street are to leave the area

“It’s unsafe. It’s an unlawful assembly,” LAPD Chief Michel Moore told ABC 7 news in an interview on Friday evening. “It’s dangerous for all the residents and others. So it’s unfortunate. It’s a dark day in our history, that we have to do this, but this is what’s going to save lives and this is going to save property.” Police reportedly used flash bangs, tear gas, and rubber bullets on the crowd of demonstrators, referring to some who looted businesses as “opportunists,” who were using the protest as an excuse to make off with some free stuff.

Yesterday evening, Black Lives Matter cofounder and native Angeleno Patrisse Cullors tweeted, “Something like 35 cities are uprising tonight. The collective is tired and full of rage. Let’s be ready for the shift. Can’t wait to live in a world where we are free.” Mayor Eric Garcetti tweeted to ask for a “peaceful end to a painful night,” saying “We respect every Angeleno’s right to protest, but violence and vandalism hurts all.”

The uprisings relating to George Floyd’s death and police violence against people of color have coincided with the City of Los Angeles releasing its proposed 2020-21 budget, which allocates 54 percent of the city’s revenues—about $5.4 billion—for the LAPD. That’s an increase of 7.1 percent to the department’s budget, as the Housing and Community Investment Department and the Department of Animal Services face cuts of 9.4 and 14.5 percent, respectively.

Furthermore, as many City Hall employees face pay cuts, college-educated LAPD officers are set to collect bonuses totaling $41 million for “education incentives.” “Now is not the time to ask our front-line first responders to renegotiate contacts in the middle of a pandemic,” Garcetti’s deputy chief of staff Szabo told the L.A. Times.