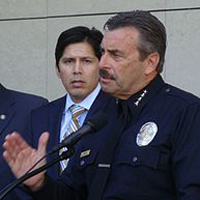 LAPD Chief Charlie Beck told The Times today that city officials are working with leaders of Occupy LA on a timeline for ending the movement’s weeks-long encampment at City Hall. Members from each group were expected to meet Tuesday to negotiate a compromise that would include a “different location or a different medium” for demonstrations.

Occupy Wall Street protesters were forcibly removed from Zuccotti Park in the early hours of Tuesday morning. In response, Occupiers in L.A. held a midnight march supervised by the LAPD. A message about the march on the Occupy LA Web site reads, “We thank the police for joining us, but we ask that they bring signs instead of batons and other weaponry next time. After all, we are a peaceful movement.”

The New York State Supreme Court ruled Tuesday afternoon protests can continue in Zuccotti Park as long as it remains available to the general public, so that’s where things stand for now.