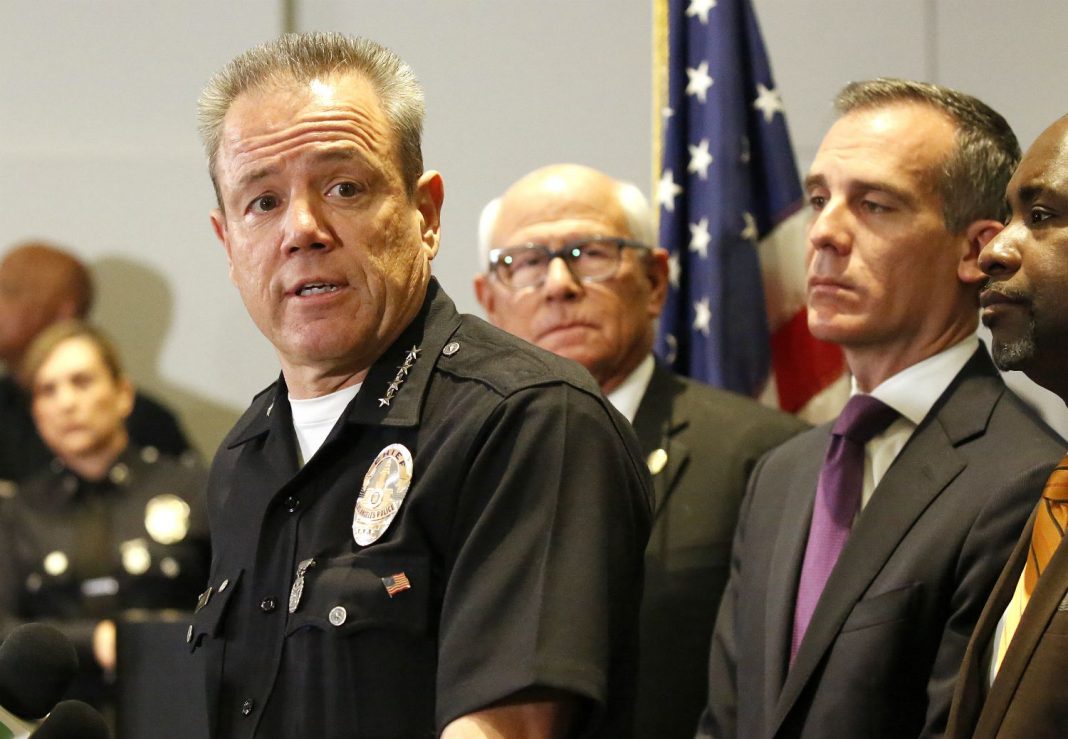 If you happen to be in a traffic accident in the city of Los Angeles in the near future, and it’s a minor collision with no crime perpetrated by a driver, then forget about having the Los Angeles Police Department send a patrol car to the scene.

Instead, you’ll be directed to an online portal. Once there, you’ll find a form to fill out.

The use of a website rather than a live officer for any of the tens of thousands of collisions that occur in the city each year is just one result of the $150 million reduction in the LAPD’s budget that the City Council and Mayor Eric Garcetti authorized in the wake of the widespread racial justice protests during the spring. According to Chief Michel Moore, hundreds of positions, as well as a coterie of services and investigative units, stand to be lost or diminished as the department focuses on maintaining patrol and core community functions.

In an appearance before the Los Angeles Police Commission on Tuesday, Moore said that the LAPD’s ranks, which formerly amounted to 10,100 sworn officers, has shrunk to 9,854 and will be further reduced to 9,750 by March or April of next year (the cuts are coming not by layoffs, but rather retirements, with openings left unfilled). He said personnel are being shifted and steps are being taken to ensure that essential services continue, but that less money naturally means fewer resources can be deployed.

The cutbacks are also impacting the roster of civilian employees. Moore said the former 3,044-person-strong staff of non-sworn personnel will drop to about 2,850.

An LAPD spokesperson said the department is unable to provide more information about cost-reduction moves and does not have public documentation regarding coming personnel and resource shifts. However, other indicators show that some dramatic changes could be on the way. Last week, Moore told NBC 4 that the unit that focuses on sexual assaults will be dissolved and its staff redirected to LAPD divisions across the city. The unit has gained attention for investigations into figures including Harvey Weinstein and former USC physician George Tyndall.

“The sexual assault unit, this is one of the cutbacks that we’re doing, one of the realignments,” Moore told a reporter for the station. “Those specialized detectives will be moved out to the geographic bureaus.”

On Friday morning, ABC 7, citing an LAPD memo, reported that other cuts will include disbanding a unit that investigates animal cruelty, as well as specialized burglary and cargo auto theft details within the department’s Commercial Crimes Division. That station also reported that the ranks of police units dedicated to the Hollywood Entertainment District and Venice Beach will be reduced.

“Our desk operations will be restricted once COVID is over to just Monday through Friday business hours,” Moore told the Police Commission during its November 10 meeting.

Another potential cut would impact a different aspect of policing. Moore this week said that the budget reduction, coinciding with retirements and a hiring freeze, may force him to shut down jails in some area police stations, a step Police Commission President Eileen Decker said makes her “extremely concerned.”

The quest to save money extends to options one might not expect. Moore said he is directing personnel to look for cost-reducing administrative changes, such as determining whether a report that is compiled weekly, for example, can instead come out once a month.

The reductions come as the LAPD is being buffeted by an array of political, economic, and other swells. The department, like law enforcement agencies across the nation, has endured intense scrutiny in the wake of the May killing of George Floyd by a Minneapolis police officer, as protests propelled by Black Lives Matter led to calls to “defund” the police. Although Los Angeles leaders rejected the demands of some activists to reduce the LAPD’s $3 billion annual budget (including pensions and other expenses) by as much as 98 percent, the council and Garcetti did agree to the $150 million pullback, and to begin to look at what type of calls could be handled with non-armed or non-LAPD personnel.

The budget reductions also come at the same time that LAPD salaries are rising. Well before the onset of the coronavirus, the Los Angeles Police Protective League, the union that represents rank-and-file officers, negotiated a series of pay hikes with city officials. The result is that officers will get a 4.8 percent salary increase (in two phases), and many will receive additional education bonuses. Calls to delay the raise by Councilman Mike Bonin and others have been rebuffed by the union. Moore acknowledged the financial hurdle.

“While it [is] a smaller workforce, it [is] also a more expensive one,” he told the Police Commission on November 10.

The department’s financial strain is being exacerbated by declining tax streams during the pandemic. City leaders have said revenues in the current fiscal year could be $600 million less than originally anticipated.

The decision to shift officers into the field and away from specialized units also comes as Los Angeles—like cities across the country—is experiencing a spike in some of the most serious crimes. Los Angeles has already recorded 289 homicides this year, up from 232 at the same time last year. Additionally, the number of shots fired and shooting victims are both up more than 30 percent over 2019 levels.

South Bureau once again experienced a spike of 15 victims being shot through this last Saturday. Our community needs unity at this moment of unnecessary violence. We tip hotline 800-222-TIPS #WeareLA @LAPDSouthBureau pic.twitter.com/uBbjiMJ0Kv

Those are not the only thorny matters Moore is facing. The LAPPL, which bristled at the department’s budget cuts, has taken aim at the chief, recently releasing a survey asserting that a vast majority of officers lack confidence in his leadership and do not feel supported. Moore acknowledged the situation and a drop in department morale.

His role, Moore told the commission on November 10, “is to do a better job, is to strike that balance of reinforcing and recognizing that this very organization will lead the country in the evolution of policing and the reforms that are being sought.”

He added, “I am hurt by their disappointment in me, but I am a believer that you own it, you step forward and you move into the future.”