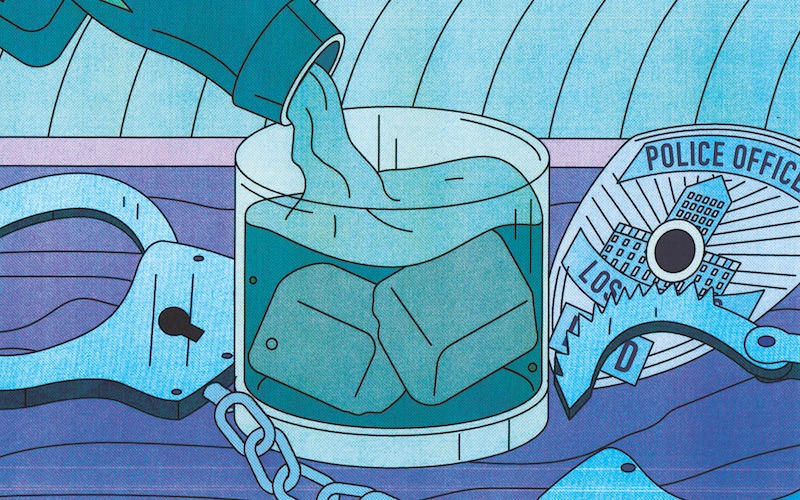 “This is a difficult subject for early in the morning, huh?” Detective Mike Margolis asks, to some quiet laughter. “What we’re talking about here is making bad decisions.” He looks out at the group: some 35 men and 7 women who have been promoted or are about to be promoted to the rank of sergeant or detective with the LAPD, each of them on the force maybe ten years. They’re sitting at long tables in a conference room at the police academy in Elysian Park.

Margolis has been on the force for 28 years; he’s got fewer than 3 left, he’ll tell you. He’ll also tell you he’s a recovering alcoholic, sober 16-plus years, and if you do the math you’ll realize he had a serious drinking problem while he was on the job. A tall, intense man, he chooses his words carefully. “You wouldn’t have wanted to go through the door with me during a search warrant, due to my inability to focus,” he says, eyeing the group, “because I was hungover.”

Addiction prevention units focused on treating officers aren’t routine in police departments, and the LAPD’s is the only one west of the Mississippi run by two cops who are in recovery: Alongside Margolis is Sergeant Gus Marroquin, compact, soft-spoken, and ten years sober. As part of the department’s Behavioral Science Services Division, they work with 16 psychologists to reach out to 9,900 sworn police officers, 2,800 civilian  employees, and their families, providing one-on-one therapy and treatment for addiction, domestic violence, anxiety, suicidal thoughts, and depression.

It makes sense. “Cops are resilient but susceptible,” says Kevin Jablonski, the psychologist who runs BSS. “They encounter daily trauma. They see suffering the public never experiences.” And like many first responders—ER docs, nurses and firefighters—they self-medicate to deal with the stress. According to a 2011 study published in The American Journal on Addictions, 18 percent of male officers and almost 16 percent of female officers indicated that they’d dealt with adverse consequences from using alcohol.

Jack de Coup-Crank fit the bill when he was a sergeant. In the early ’70s, he outed himself as a sober alcoholic in front of command and was offered the job of peer counseling by LAPD Chief Ed Davis. “We called it peer counseling,” de Coup-Crank laughs, “instead of something like AA; didn’t want to scare anyone. We started in the basement of the Episcopal Cathedral at 6th and Figueroa, Thursday nights, 7 to 9:30. No stigma. You could join or not. And then I asked Sergeant Sam Barber, at the academy, ‘Hey, you suppose I could get five minutes at a recruitment class?’ And there I was, like a wandering minstrel, explaining how you know if you’re an alcoholic to officers who wanted to get sober.” The Addiction Prevention Unit had begun.

The pitch all along has been that the help is confidential and that there is no disciplinary action taken against anybody who comes in or if you, as a supervisor, approach somebody you feel is having a problem. “Maybe you don’t feel you signed up for shoulder tapping,” Margolis says to the room. “It’s not easy to do, but if someone wouldn’t have tapped my shoulder and I had kept drinking, it would have ended my career.” As he sees it, sharing his personal horror story is his moral obligation: “I don’t want to see anyone go through the pain that I did.” Marroquin, too. He can tell you how he blacked out one night driving under the influence and woke the next morning with no memory of how he made it home in a wrecked car with only three tires.

“How many of you have had an injury on the job?” Dr. Adam Herdina asks the room, and practically the whole audience raises a hand. “Where?” he says. “Back.” “Neck.” “Knees!” people shout. Herdina is another psychologist with BSS. “So, you have an injury and then you have a prescription: Vicodin, OxyContin—Oxy being an extra-clean version of heroin,” he adds. “Or say you worked SWAT and you come home at 4 a.m. and you’re still wired so you take a drink and a sleeping pill, and then it’s the next night….”

“And sometimes there’s no off switch,” Margolis adds.

It’s rare to see a cop and a psychologist teach a class together, but Margolis, Marroquin, and Herdina tag-team this presentation in precincts all over L.A., from a dawn roll call in the Hollywood Division to a wellness class for the southern divisions.

“We don’t throw anyone under the bus,” Margolis says to the group. “You got a problem coming to my office, I can chop it up with you at Starbucks. I’ll come to you,” he says, with a smile. “I make house calls.”

RELATED: The Cop Who Became a Robber