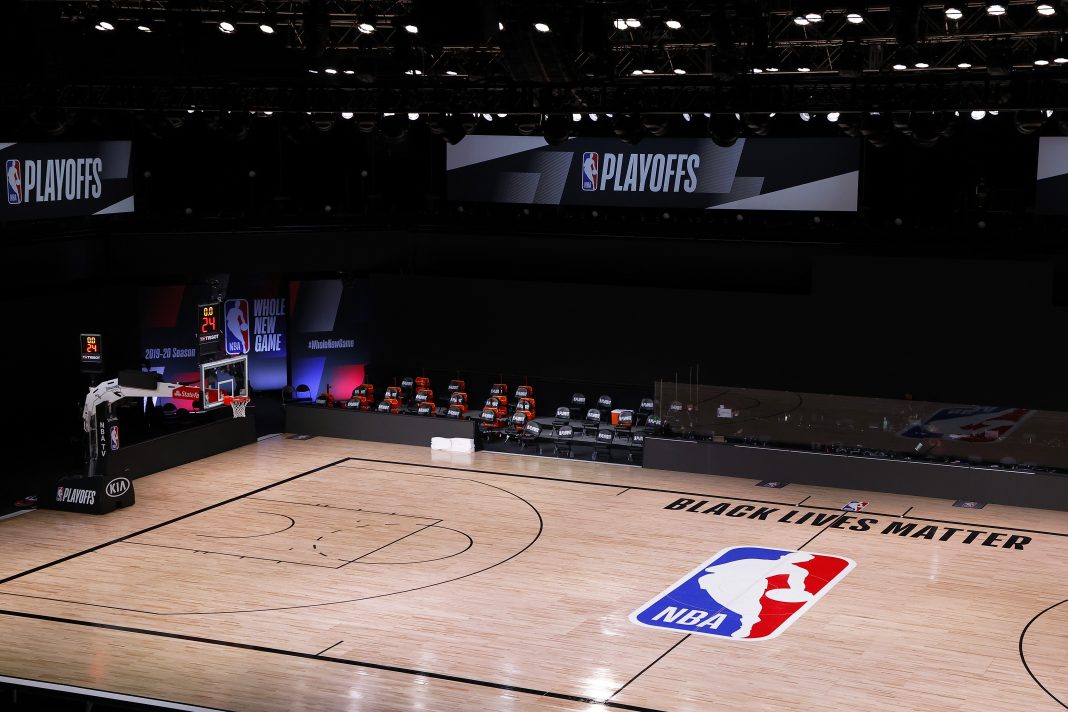 UPDATE: AUGUST 27, 12:00 P.M. – NBA players, including those on the Lakers and Clippers, have now announced they will return to the court to finish the playoffs. Last night, both L.A. teams had expressed a desire to walk out on the remainder of the season as a protest of police violence and racism in America, but it appears players have now concluded that they can effectively advocate for justice while playing the final games.

The Los Angeles Times reports there will be no games held on Thursday night, but games will be rescheduled for the near future.

Professional athletes in other leagues and sports have also joined the protest. The WNBA will remain dark for a second night on Thursday, players from several NFL teams have opted not to participate in scheduled practices, and the NHL is said to be discussing next steps.

Naomi Osaka, one of the leading stars of professional tennis and the highest-paid female athlete in sports history, has also pulled out of the semi-finals of the Western & Southern Open in protest of injustice.

“Watching the continued genocide of Black people at the hand of police is honestly making me sick to my stomach,” Osaka told The Telegraph. “Before I am an athlete, I am a Black woman. And as a Black woman I feel as though there are much more important matters at hand that need immediate attention, rather than watching me play tennis.”

UPDATE: AUGUST 27, 9:00 A.M. – It now appears NBA playoff games may resume, with the Lakers and Clippers participating, perhaps as early as Friday.

ESPN journalist Adrian Wojnarowski tweeted that sources informed him of the decision to move forward with the season. It is now expected that there will be another, smaller meeting of players to determine their next steps.

Many NBA players had reportedly argued that they could do more to bring visibility to their concerns about police violence and racism through their platform as active players than they would be able to do if they walked away from the season entirely.

UPDATE: AUGUST 27, 8:20 A.M. – As the NBA owners and players resume their meetings in Orlando this morning to hash out the details of what may be the next phase of their protest, TMZ reports the players are creating “a list of actionable items” for the NBA to address. The site reports that, the league can make some substantive commitment on those demands, the Lakers and Clippers may join other NBA teams in resuming games.

UPDATE: AUGUST 26, 7:50 P.M. – Following today’s walkout protest, NBA players gathered for a meeting within their Orlando bubble. Sources close to that meeting are now reporting that both the Lakers and Clippers players present have voted to not play the remainder of the NBA season.

Some have referred to the protest as a strike, but in an Instagram Story post LeBron James, a leader of the movement, explicitly termed the activity a boycott.

Shams Charania, senior NBA reporter for The Athletic tweeted on Wednesday evening that, after a contentious meeting, the Lakers and Clippers reached their decision–but were not joined by other teams in the playoffs. Even the Milwaukee Bucks, the team that launched today’s protest, appear to have not voted to boycott the rest of the season.

Sources: Miami's Udonis Haslem spoke and essentially told everyone in room that — without Lakers and Clippers, how will season continue?

LeBron James walked out. Rest of Lakers and Clippers exited behind him.

Despite the dramatic meeting, some sources are saying the deal for Los Angeles’s teams to walk away from the season entirely may not yet be entirely sealed. Adrian Wojnarowski, senior NBA Insider for ESPN, tweeted that he was hearing tonight’s vote was more of a non-binding poll, and any official action is still up in the air.

As one source in meeting said, "We're trying to figure out how to take action." https://t.co/BasFmNl4V7

“Everyone is still too emotional,” he reported a source saying. “There needs to be more time to come together on this.”

The league’s Board of Governors has scheduled a special meeting for Thursday morning to address the issue. The players are also expected to confer again on Thursday.

“Eighty percent of NBA players are Black men,” read a statement issued by the Lakers on Wednesday. “We cannot love them for the joy and entertainment that they bring to the world, yet sit in silence and fail to use our platforms and resources to amplify their voices when they demand the justice and equality that America has promised us all, but denied Black people for too long.”

"Having two boys of my own and me being an African-American in America and to see what continues to happen with police brutality towards my kind … it's very troubling." – @KingJames pic.twitter.com/haC4ubLdqg

AUGUST 26, 2020 – The Milwaukee Bucks were scheduled to face the Orlando Magic in Game Five of the NBA playoffs this afternoon. But, ahead of the game, the team announced they would not take the court. The refusal was an act of protest inspired by the shooting of Jacob Blake by police in Kenosha, Wisconsin, as well as armed vigilantes’ violence against protesters.

“When we take the court representing Milwaukee and Wisconsin, we are expected to play at a high level, give maximum effort, and hold each other accountable,” read a statement delivered by the players, who stood together, all dressed in Black Lives Matter shirts. “We hold ourselves to that standard and in this moment we are demanding the same from lawmakers and law enforcement.”

Soon after the announcement from the Bucks, other professional sports teams moved quickly to cancel their own games in solidarity. The Lakers and Trail Blazers called off tonight’s playoff game; the entire WNBA announced it would be dark for the night.

The walkout movement spread even to Major League Baseball, an organization less known for encouraging activism among its players. Three games have been canceled as part of the protest, those between the Milwaukee Brewers and Cincinnati Reds, between the Los Angeles Dodgers and San Francisco Giants, and between the Seattle Mariners and San Diego Padres. However, unlike in basketball, MLB has so far made no official, league-wide statement.

Notably, these athletes using their platform to advocate for social justice on the fourth anniversary another pro athlete doing the same. On August 26, 2016, Colin Kaepernick kneeled for the National Anthem for the first time.