Home Neighborhoods A Dispute Between Laguna Beach Neighbors Involves a Pricey Sculpture and the... 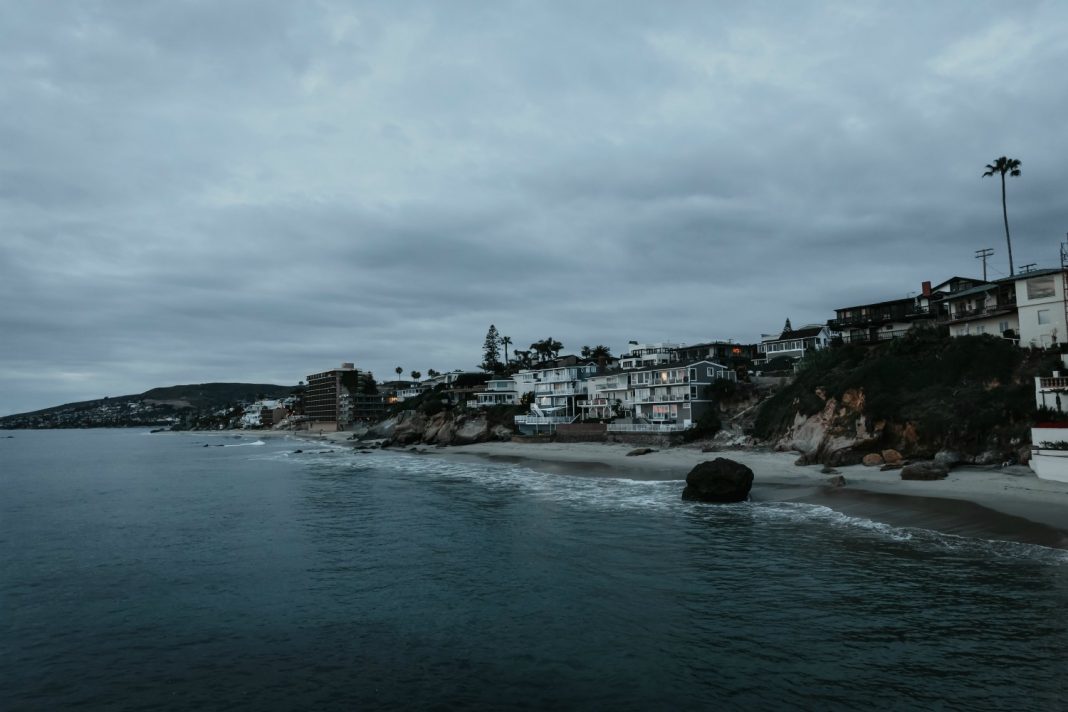 As the Los Angeles Times reports, at the heart of the dispute is a $1 million, 22-foot-tall, glass lawn sculpture and protective netting, which tech entrepreneur Mark Towfiq and wife Carol Nakahara say obstructs their seaside view.

In dueling lawsuits, Towfiq and Nakahara accuse Gross and Schwartz of harassment and intentional infliction of emotional distress, while Gross and his partner claim the netting is necessary after the sculpture sustained more than $50,000 in damages “apparently” due to a thrown rock which, they claim, is evidence of an “escalating campaign of vandalism.”

Towfiq and Nakahara say the art was likely damaged by something falling on it.

Emails obtained by the Times from the city of Laguna Beach, meanwhile, indicate that a person associated with Gross and Schwartz told a code enforcement officer the netting was temporary and needed to protect the sculpture from “trees and mother nature,” adding that a palm frond caused $100,000 in damage.

In their lawsuit, Towfiq and Nakahara say the netting was at first removed intermittently but has since remained up, with Gross and Schwartz neglecting to address the issue. Towfiq then complained to the city, which had the property inspected and informed Gross in July 28 letter that the netting, lighting, and sculpture lacked the proper permits.

Towfiq and Nakahara claim in their suit that Gross and Schwartz began blaring music at all hours—sometimes remotely when they weren’t at home—to get their neighbors to drop the complaint. In an October 15 application for a temporary restraining order, which was granted, Towfiq cited a text message allegedly sent by Gross, reading, “Peace on all fronts or well [sic] just have nightly concerts big boy.”

Their Superior Court lawsuit states, “Defendant William Gross is a 76-year-old billionaire used to getting his way no matter what. As proven by their behavior here, Gross and his decades-younger-girlfriend, defendant Amy Schwartz, are bullies.”

For their part, Gross, who cofounded investment firm PIMCO, and Schwartz claim in their October 13 suit that Towfiq is obsessed with them, installing cameras directed at their property and committing other “peeping tom behaviors.” In his own request for a temporary restraining order, which is pending, Gross said he felt “trapped in my own home.”

In their lawsuit, Gross and Schwartz accuse Towfiq of invasion of privacy, among other things, stating, “Defendent Towfiq appears to have a particular fascination not only with Mr. Gross but also Ms. Schwartz, particularly when the pair are swimming and thus wearing minimal, if any, clothing.”

Gross is no stranger to bizarre property disputes. In 2018 his ex-wife, Sue Gross, accused him of turning a different Laguna Beach home over to her only after befouling the place with fart- and vomit-scented sprays. Gross later admitted to using the sprays, saying that the divorce had grown “very ugly.”

Towfiq has requested that the temporary restraining order be converted to a lengthier civil harassment order and a hearing is set for November 2. Gross has been given an extension until November 16 to seek the proper permits.

RELATED: This Laguna Beach Landscaper Is Making Masterpieces With Succulents