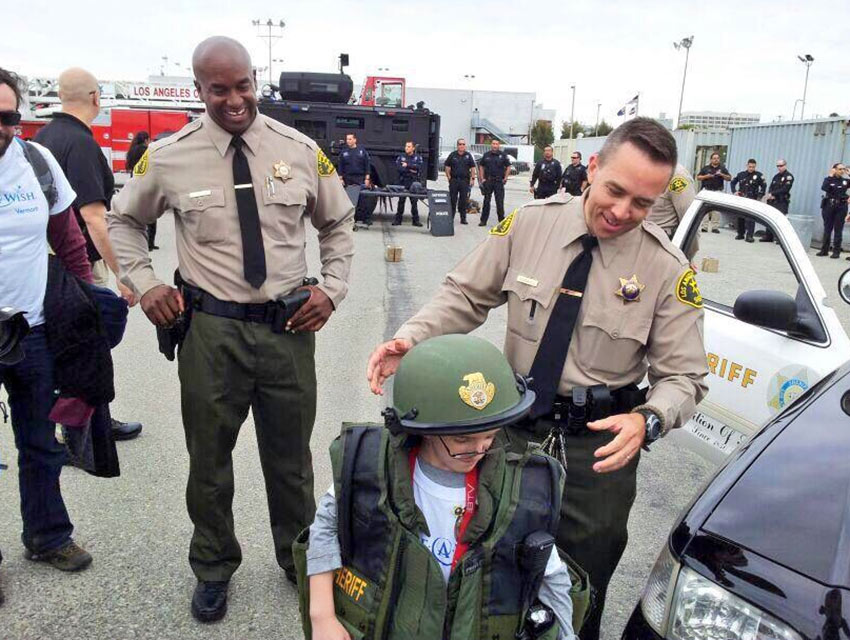 A convoy of emergency vehicles met a United Airlines flight arriving from Vermont at LAX yesterday, but there’s no crisis to report. Airport police arrived to escort Noah Cohen, an eight-year-old boy diagnosed with a rare condition called VACTERL association, to an afternoon of special activities arranged over many months by the Make a Wish Foundation. It’s Noah’s dream to become a first responder, so the organization worked with local agencies to make him feel like a member of some local teams.

Personnel from the Los Angeles Airport Police Division, Los Angeles Police Department, Los Angeles Fire Department, and Los Angeles County Department got involved, offering Noah a V.I.P. tour behind-the-scenes of LAX and answering his questions about life on the front lines of disaster. “The police chief from the airport police division was trying to convince him to become a police officer,” says firefighter David Ortiz, “but I think he’s smart enough to recognize the better job is being a cop or paramedic.”

Noah got to meet dogs in the airport police canine unit, see equipment, ring sirens, honk horns, jump into police vehicles, and shake hands with officers, too. “We had to have several police officers and fire fighters carry all the goodies that were bestowed on him back to the car,” says Ortiz. “I was very happy to see a boy who has had over 20 surgeries be so positive, so energetic. It puts our everyday problems into perspective. I had trouble keeping up with him. I went home with a smile.”